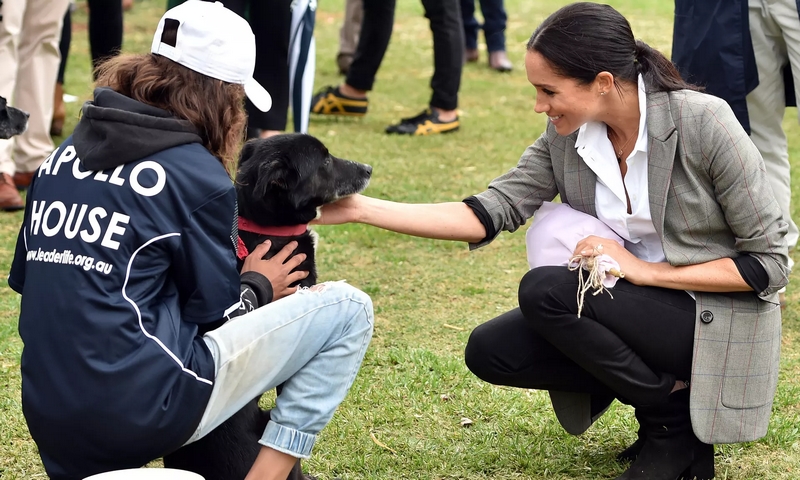 Meghan Markle wears pair of Outland Denim jeans on her visit to Australia, where she put the spotlight on ethical and sustainable fashion. Photograph: Peter Parks/AAP

This article titled “The Meghan effect: can her ethical and sustainable fashion choices change lives?” was written by Alexandra Spring, for theguardian.com on Wednesday 31st October 2018 01.11 UTC

They’re just a pair of jeans but when Meghan, the Duchess of Sussex, decided to pull on a skinny black pair from Outland Denim when she visited Dubbo in regional New South Wales with Prince Harry, she couldn’t have known what effect that choice would have.

Or maybe she did.

Regardless, according to Outland Denim’s founder, James Bartle, that decision has meant the Australian company will employ up to 30 more seamstresses, rescued from human trafficking and sexual exploitation, to work in its Cambodian production house.

Bartle says from the moment Meghan Markle was pictured wearing the jeans, website traffic increased 3,000% and the Harriet jeans sold out within 24 hours, leaving a sizeable waiting list in their wake.

Outland Denim isn’t the only brand that has felt the impact of the duchess’s decision to wear sustainable and ethical fashion labels during the royal tour of Australia, Fiji, Tonga and New Zealand.

With the help of her close friend and reported stylist Jessica Mulroney, she has been pictured wearing Rothy black flats, made from 100% post-consumer plastic water bottles, in Sydney and Melbourne; the Veja V-10 sneakers made from wild rubber that she wore for a day on the harbour; the Pineapple sundress from the cool-girl eco brand Reformation she wore on her day off on Fraser Island; and the navy sustainable Stella McCartney cape dress and ethically sourced Ecksand jewellery she wore to the opening ceremony of the Invictus Games. All the brands have reportedly felt the Meghan effect, with many selling out quickly too.

Bartle says that type of exposure for ethical and sustainable brands will make a big impact, elevating them into the public consciousness in a way that other campaigns or endorsements can’t.

“With Meghan’s choices getting that level of exposure, and the sales that seem to follow, ethical and sustainable may no longer be a nice idea for idealists or a niche, but a viable and very exciting fashion proposition that can potentially change the lives of a lot of underprivileged people for the better.”

The duchess has also done her bit to direct the world’s spotlight towards Australian and New Zealand fashion labels.

The Paris-based Australian designer Martin Grant has been a clear favourite, with Meghan choosing a sundress, a trenchcoat and an A-line dress for a number of events; while the acclaimed Australian designer Dion Lee won even more fans when she sported an early version of his folded sail dress. The New Zealand designer Karen Walker has also been given the royal approval – Meghan has been seen wearing her sunglasses, stud earrings and a plaid trenchcoat on her first stop in New Zealand.

It hasn’t been just big names: the cream shift dress worn on her first day out in Sydney came from the boutique brand Karen Gee, and she chose rings and necklaces from the Sydney-based jewellery designer Natalie Marie.

This exposure has had a direct impact: Grant says sales for all three of the outfits Meghan sported increased dramatically, while the company generally has had “an enormous amount of press and buying requests from all over the world”. Karen Walker says both the sunglasses and earrings sold out within 24 hours after the duchess wore them, while the pre-orders for the trench sold out within a few hours. “The right product, worn by the right person at the right time always has a positive impact, whether that’s translated into sales or just chitchat.”

And while there have been numerous pairs of pricey Manolo Blahniks, Philip Treacy hats, Dior clutches and glittering jewels on display, Meghan also quietly made the point that style doesn’t have to be expensive.

On her day in Dubbo she went for J Crew’s Sadie ankle boots; she picked out a pretty polka dot sundress from & Other Stories for her low-key arrival on Fraser Island; and wore a relatively cheap pair of Castañer espadrilles for her visit to Bondi Beach.

And, proving her point, her most memorable accessory is likely to be the pasta necklace dipped in gold paint given to her by a young schoolboy in Melbourne. Priceless.