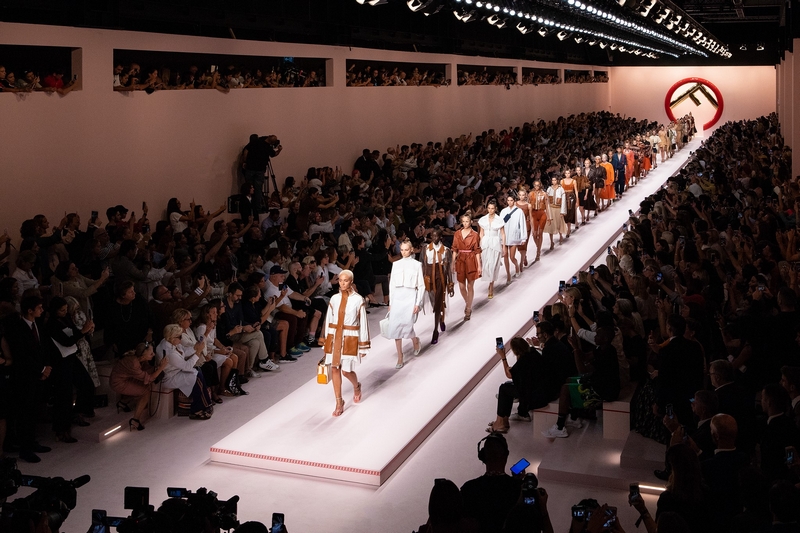 This article titled “The logos are lowered but the fur still flies for Fendi in Milan” was written by Morwenna Ferrier, for theguardian.com on Thursday 20th September 2018 17.20 UTC

It would be tricky to talk about Milan fashion without mentioning Fendi, which showed a few hours after the other Italian powerhouse, Max Mara. The Fendi show took place across town in its usual location, a long, thin, hot room, which for this season had been painted ceiling to floor in millennial pink.

While the head designer, Karl Lagerfeld, still hadn’t got the no-fur memo – there were four appearances in this collection on Thursday despite the fact that a) it was for summer and b) the rest of the industry is moving in the opposite direction – he knows how to please the masses. At one end sat Anna Wintour. At the other, Nicki Minaj.

And opposite both there was a phalanx of bloggers and vloggers, many of them, like Minaj, covered in designs from Fendi’s last collection when a collaboration with Hey Reilly led to a mash-up of the Fendi and Fila logos.

The collection was a pretty ensemble of see-through plastic macs with leather trim, huge jackets ruched tightly up to the elbow, and a few pretty gauzy gowns embroidered with the same flowers that formed a wall outside the show venue.

As is the way with a company that understands the power of the leather goods industry – it’s currently the ninth most valuable brand in the world thanks, in part, to the colossal rate at which it produces accessories – there were tons of, bags, including a fun reworking of the Treasure bag. However the Fendi logo that dominated the previous collection took slightly more of a backseat. Here it came in white, and lightly monogrammed on to various pieces.