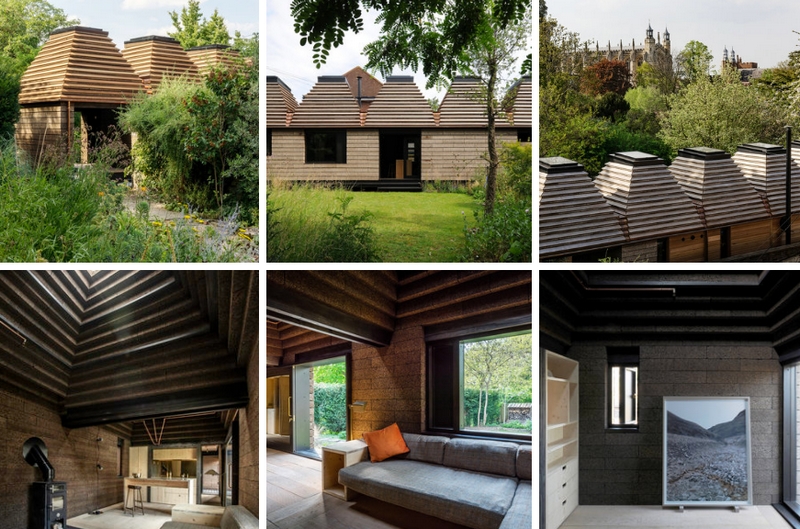 This article titled “Stirling prize 2019 shortlist: from a cork creation to a Teletubbies-style whisky distillery” was written by Oliver Wainwright, for The Guardian on Wednesday 17th July 2019 23.01 UTC

A house made of cork will go up against a whisky distillery and one of the busiest stations in the UK to be named building of the year in the most interesting and varied Stirling prize shortlist for some time. They are joined on the list, which celebrates innovation in British architecture, by a new visitor centre for the Yorkshire Sculpture Park, an opera house inserted into a 17th-century stable block in Leicestershire and an exemplary development of low-energy council housing in Norwich.

Energy efficiency rightfully looms large on this years’s list, following the recent launch of Architects Declare, a call to arms from a large group of previous Stirling prize winners for an urgent “paradigm shift” to ditch carbon-hungry practices. The Cork House in Berkshire, designed by Matthew Barnett Howland with Dido Milne and Oliver Wilton, offers one such alternative. Built from expanded cork blocks, made using waste from the cork stopper industry, the structure is carbon negative and will emit next to zero carbon over its lifespan; it is also designed for disassembly and reuse. The exposed cork walls and engineered timber create a cosy interior space that feels burrowed from the ground, lit from above by a row of funnel-shaped roof lights. It was described by RIBA judges as “a noble, momentous model to aspire to”, and its innovations could be scaled up.

The house has a raw material beauty shared by the Weston, an earthy jewel of a visitor centre for the Yorkshire Sculpture Park, designed by the young practice Feilden Fowles. Presenting a rugged monolithic wall that looks as if it was sliced out of the soil, the defensive enclosure houses an expansive light-washed building, hosting a new gallery, restaurant and shop in a carefully judged sequence of spaces. A long, slightly inward-curving glass wall frames a stunning view of the park from the cafe, while the gallery is topped with board-marked concrete roof lights that plunge down from the ceiling. Once again, there is clever environmental innovation: temperature and humidity are regulated by a hidden labyrinth of 10,000 unfired bricks, avoiding the need for air conditioning while still allowing the gallery to display precious loans.

The Weston’s quiet restrain is shared by the Nevill Holt Opera, a project that offers further proof of Witherford Watson Mann’s talent for inserting new things inside old shells, following their Stirling prize win for the transformation of the ruined Astley Castle into a Landmark Trust house in 2013. This time they have applied their meticulous skills to a former stable block in the grounds of Nevill Holt Hall near Market Harborough in Leicestershire, erecting an elegant 400-seat venue that preserves the rough-and-ready exterior quality of the space. A horseshoe-shaped balcony is raised on slender steel columns above a rugged concrete floor, while douglas fir panelling creates a sense of continuity between stage and seats. “The modesty, craftsmanship, care and attention that have been applied here are exceptional,” said the judges.

A more high-octane kind of drama can be found further north, in the form of Rogers Stirk Harbour + Partners’ billowing distillery and visitor experience for the Macallan whisky empire in Moray, on the northern coast of Scotland. The undisputed masters of exposed pipes have conjured a theatrical spectacle from the seething network of tubes, mash tuns, condensers and copper stills that go into making the amber liquor. With their usual hi-tech precision, the architects have transformed the prosaic production process into a series of set-piece stage sets with the glamour of scenes that Ken Adam might have dreamed up for James Bond or Dr Strangelove. It is all swept beneath a roof of grassy mounds that looks like the Teletubbies went hard on the scotch. It is an appropriately outre temple for a brand that produced the world’s most expensive bottle of whisky, which sold last year for £848,000.

While RSH+P have made an elaborate spectacle out of the simple process of distilling grain, Grimshaw architects have succeeded in unravelling the fiendishly complex knot of London Bridge station into something remarkably clear and straightforward. By scooping out the underbelly of Victorian railway vaults, they have created an airy open concourse, where the tracks bridge the space overhead, allowing natural light to flood down in between them. It is a refreshingly legible space, with pairs of long escalators rising to the platforms, while a new arcade of concrete vaults leads through to the Underground station. From the outside it is less successful, resorting to a weird kind of flattened Victorian pastiche, topped with the practice’s trademark swoopy metal canopies, but with edges and junctions that don’t quite glide as gracefully as they should.

Goldsmith Street in Norwich could be the most significant development of them all. It is a scheme of 100% social housing – yes, proper council housing with secure tenancies and fixed rents – developed by Norwich city council and all built to Passivhaus specification, the gold standard for energy efficiency, chosen with tenants’ fuel poverty in mind. Modelled on the city’s desirable Golden Triangle of Victorian terraced houses nearby, it borrows the narrow street width and friendly neighbourhood feel, with gardens backing on to a shared passageway, with benches and picnic tables, perfect for kids to play unsupervised. The homes have been cleverly designed with an asymmetric roof that allows winter sunlight to reach houses behind, while details including glossy black tile roofs and buttery brickwork give it the handsome quality of a place in which real care has been invested.

In its 23-year history, the Stirling prize has never been awarded to social housing – in part, because there hasn’t been any to celebrate. But now, as local authorities across the country are busy building their own homes again for the first time in a generation, there couldn’t be a better time to recognise the value of thoughtful design for those that need it most, and the bravery of councils that are leading the way.