“You can leave your hat on” only if you are wearing  one of Elvis Pompilio’s creation!

After Brussels ,Antwerp comes on stage. The success of the youg designer brings him partnerships with famous fashion houses like Dior or Valentino. And the list of customers form entire world begin to grow.In 1992 he opened a boutique in Paris. 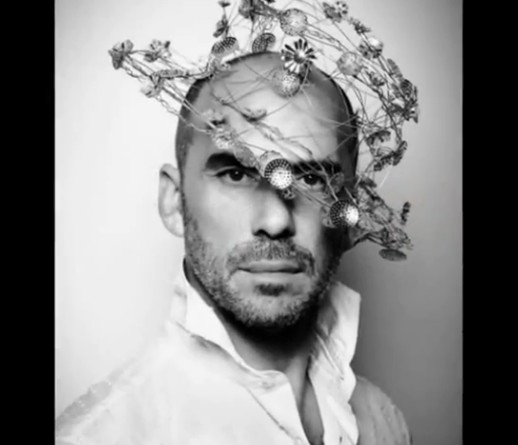 His creations were exposed to Bergdorf Goodman, Barneys, Bendel, and Saks Fifth Avenue in the U.S.; Holt Renfrew in Canada; and the most exclusive boutiques in Europe and Japan. Over the years, he has been consistently praised for his work in the Belgian and international media and his creations are part of several permanent collections, including those at the Musée Grévin and the Musée des Arts Décoratifs in Paris.

He designed the accessories for collections by Chanel, Thierry Mugler, Céline, Hugo Boss and Ocimar Versolato, and some of his famous clients include Joan Collins, Harrison Ford, Madonna, Yannick Noah, Axelle Red, Mickey Rourke, Amélie Nothomb, Etienne Daho, Mauranne, the Duchess of York, Lady Linley, Queen Sonja of Norway, Queen Beatrix of the Netherlands and Queen Paola of the Belgians. In 2002, he decided to close all his shops and to concentrate on the design side of his business. He celebrated this change with a huge fashion show, recorded in a book published by Luc Pire.

But in the 2012, when 2LUXURY2.com comes in Brussels for its official launch , we found out an Elvis Pompilio full of life and joy. Above Creezy Courtoy and Elvis Pompilio in a very touching meeting after a long time. He shows us what were his latest creations and he explain to us why he is now more oriented than ever on the creation side.

We thank him for being such a wonderful guest and wish him all the best!