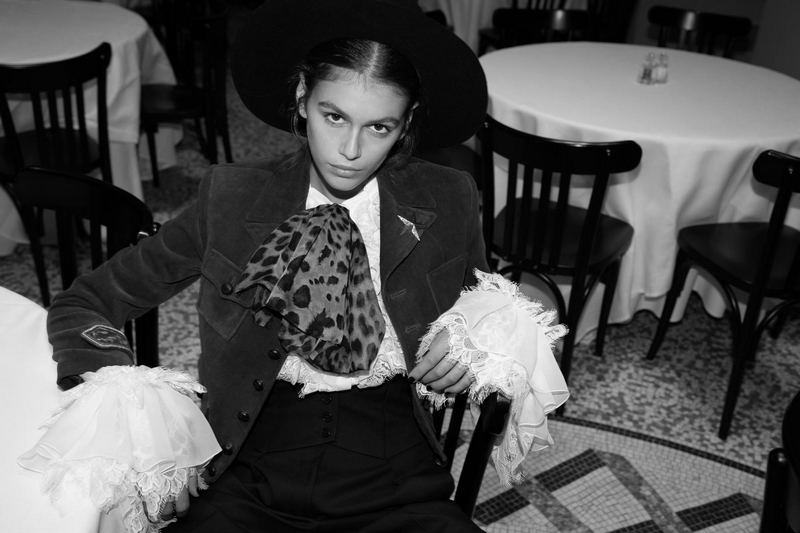 This article titled “Saint Laurent walks on water with Paris show reflecting its rich past” was written by Scarlett Conlon in Paris, for theguardian.com on Tuesday 25th September 2018 23.29 UTC

Saint Laurent may have dropped the Yves off its name back in 2012, but the man himself continues to bear a heavy influence on current creative director Anthony Vaccarello, who was in a reflective mood at the label’s Paris fashion week show.

Sending models out on to a catwalk platform of still water where they kicked up big splashes in their wake, the designer presented a collection for the French fashion house that took its cue from the brand’s eponymous founder’s gift of reimagining classic codes to create something new.

He was inspired, he explained backstage afterwards, “by the way Paloma Picasso inspired Saint Laurent in the 70s, the way she took the clothes from the 40s and made them her own”. As such, 60s shift dresses with diamanté trim merged with suiting from the same era cut from the thick jersey that Saint Laurent also used when he first established his brand. The 70s were referenced in skin-tight tuxedo suiting worn sometimes with velvet blazers, and when not with waistcoats and ruffled shirts or pussy-bow blouses.

Decoration came in the form of embellished and patchworked stars and hearts, reminiscent of the motifs Saint Laurent featured in his Love postcards from the 70s to the 00s – since reproduced into posters and seen in brasseries all over Paris – while the section of the show celebrated the late designer’s love affair with Marrakech through flowing kaftans and cutout swimwear. “I don’t want to say it’s another homage,” smiled Vaccarello. “But it’s another way to talk about all the things he did.”

Hemlines were short and vamp appeal was high-wattage in this collection, which Vaccarello described as “a mix of everything”. Now into his fifth women’s ready-to-wear season for the brand, the 36-year-old Italian has created a distinctive aesthetic for the house. His super-short embellished dresses and exaggerated details hark back to the unabashed, more-is-more glamour of Saint Laurent’s most fruitful creative years without teetering over the edge into “too-much” territory. It’s an aesthetic that was set off by the location of this spring/summer 2019 show.

Vaccarello has a penchant for an extravaganza, and fresh from unveiling his first menswear show for the house in July against the Manhattan skyline in New York, the location of Tuesday evening’s show returned to its regular haunt, the Place du Trocadero.

As tourists took a front-row seat on a wall opposite the runway – or stole an eyeful from the Big Bus double-decker that stopped as it passed – and with the Eiffel Tower twinkling in the background, towering white palm trees lined the liquid catwalk. “A touch of North Africa,” he explained.

A word that pops up a lot when Vaccarello describes his work is “eclecticism”, which he coins as “[the] freedom to build yourself, express your own personality and respect your complexity”. Coincidentally they are sentiments echoed by his predecessor, Hedi Slimane, who makes his return to the City of Light on Friday as creative director at Celine.

In his first interview since the appointment was announced, Slimane said: “A designer is someone who expresses himself authentically through what he feels. Each has his way to tell about his time.”

Two years in at Saint Laurent, Vaccarello is creating a profitable tale of his own. Owner Kering reported this year that the brand was enjoying a “sustained sales increase” – up 19.6% in the first quarter of 2018 on a comparable basis. For 2017, the conglomerate’s most profitable year on record, the company said Saint Laurent enjoyed “revenue growth across all regions”, citing customer loyalty. This equated to its 2017 revenues coming in at €1,501.4m – up 25.3% on a comparable basis.