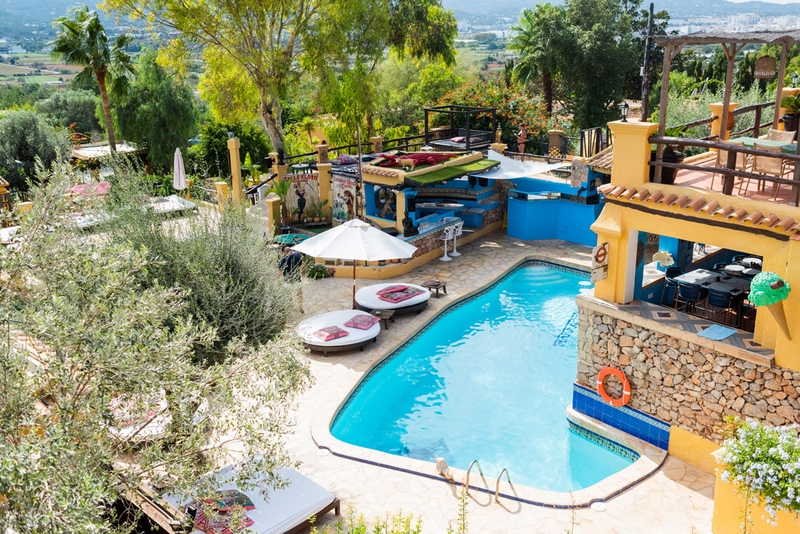 This article titled “All quiet in Ibiza as super-rich hideaway and young Brits chill by the pool” was written by Nosheen Iqbal in Ibiza, for The Observer on Sunday 19th July 2020 08.20 UTC

On the first day of lockdown in Britain, 48 private planes flew into Ibiza. While the island has only officially been open to tourists since the beginning of July, following one of Europe’s strictest quarantines, the super-rich have been making the most of a Balearic summer that hasn’t been this quiet for decades. Actor Emma Watson has been spotted in town and musician James Blunt has been living permanently in his villa in Santa Gertrudis, dubbed the island’s Notting Hill.

Exclusive boutique hotels, luxury villas and the island’s most expensive restaurants have reported an unexpected boom in business. Many are already full for July and much of August and say that wealthy customers are staying longer and spending more than the same period last year.

But with dancing currently banned and no venue allowed to stay open past 2am, Ibiza’s core offer as the world’s capital of clubbing is taking a huge hit. The pandemic has forced all of the larger venues to stay closed and it is feared that some may never reopen. The party might be over – for now – but can Ibiza really refocus on its bohemian heritage, rather than its hedonistic excess?

Along Playa d’en Bossa and on the San Antonio strip, where locals say that 95% of the tourists are British and boisterous, plenty of buildings are still boarded up and bars are near-empty. Private parties with more than 30 people indoors are banned; if caught out, organisers are slapped with a €600,000 fine. Everywhere else, face masks are mandatory on the streets and on transport. Hand sanitiser is pumped on to everyone entering a public building.

“It’s so strange to walk down Bossa high street and not see it rammed with people wearing string bikinis walking in the middle of the road, smashed off their faces,” says Abby Lowe, 36, who lived in Ibiza for five years. She is back in town visiting friends, having taken the first opportunity to leave the UK once flights began operating again.

“Right now, this isn’t very Ibiza. It’s nicer now for the people who only come for the wellness, but I feel bad for the businesses because I know how much this is affecting everyone. The reason Ibiza is so popular is because of the clubbing. That is part of its identity and it’s a great place for it and it always will be. If you strip that back, what makes it different to anywhere else?”

But the Covid-secure version of Ibiza, with its emphasis on daytime parties, has proved popular with those who have made the journey. “We don’t mind, because the daytime parties are so good here,” says Charlotte, 20, a student from Sheffield, on holiday in Ibiza for the second time with her schoolfriend Danielle. “I think we’ve had a better time than last year because everyone’s been so much more sociable. They’re so excited to be here, that everyone is just nicer to each other and there’s less of you so you really do make friends.”

According to publicist Lisa Faichney, at Ibiza Rocks, a hotel and music venue, Instagram has been a key driver in helping to popularise daytime parties for young people. It also helps explain the hotel’s aesthetic of whitewashed concrete against bubblegum pink astroturf. “They want to be able to post nice pictures in the day outside having a good time when the light and colours are popping. They can’t replicate that late at night in a dark club.”

Charlotte and Danielle agree Instagram has been important on holiday – but mostly, they say, in helping them make friends. “You don’t ask for someone’s number when you meet them, you ask for their Insta,” says Charlotte. “So you can use it to see what everyone else is doing or get ideas on where to go.”

Their flight over from Leeds-Bradford was full and “wild” with passengers singing and chanting from their seats. The friends were unsure of what to expect; their trip last summer was as rowdy and noisy as they had hoped. Now, the bars on the strip that offer cheap deals – shots with each serving of booze – are closed and they haven’t been able to dance outdoors. “It sounds bad, but it isn’t really when you’re here,” says Charlotte. “You still get dressed up to go to Ocean Beach [a daytime pool party], wear your makeup and bikini and heels and because you can’t go to the bar, you get served drinks all day on your bed. That’s been pretty great.”

We are all chilling. It’s good for some tourists but it’s very bad for business

Still, for the non-luxury end of the market, times are tough. With a distinct lack of visitors, new businesses especially are suffering. Last week, another brand new three-star hotel, Twiins, opened on the island. It opted for a low-key launch by Ibiza standards, with cocktails served by its pool on Friday evening. “It’s been very difficult to develop a project of this magnitude,” says the manager. “Reservations are slow, they are uncertain. There will be longer effects of this for all types of our client base.”

For Juan, a Venezuelan-Italian nomad who works five months in Ibiza every year to travel the rest of the time, a more staid Ibiza doesn’t seem economically sustainable. “I love craziness. I love parties,” he admits. “I like knowing I can go to one even if I don’t want to but now there is no option. We are all chilling. It’s good for some tourists but it’s very bad for business.”

Ibiza is London City Airport’s most popular leisure destination but it is operating at a significantly reduced capacity – at 10% for flights overall, expecting to rise to 50% by September. In the last week, 1000 passengers flew to Ibiza across 14 flights from the airport, compared to 3220 passengers travelled on 40 different flights in the same period last year.

But the reduced numbers may lead to a shift in the island’s priorities. “Ibiza has always been like Disneyland for adults and that brings wear and tear” says Dawn Hindle, co-owner of local institution Pikes Hotel, which is fully booked for July and much of August. Hindle, 48, first came to the island as an architecture student 25 years ago and helped set up Manumission, a club night that became as famous for it music as its live sex shows in the 1990s.

“We were part of the original problem if you want to look at it that way,” she says. “But the problems – the drugs, the mafioso, the bad reputation – that came with nightlife in Ibiza has been put up with so long because they generated so much revenue. It did get excessive. This has been a reset, it reminds you why you came here in the first place.”