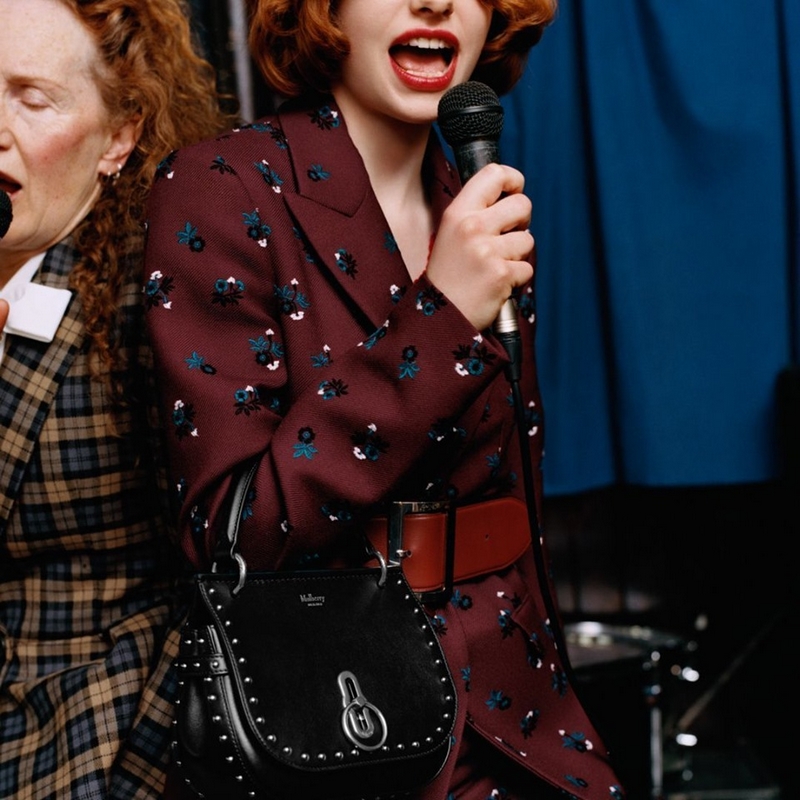 This article titled “Pub gigs and a Shoreditch mural: can Mulberry appeal to a younger crowd?” was written by Zoe Wood, for The Guardian on Saturday 29th June 2019 07.00 UTC

The shout-out was via a technicolour mural spray-painted onto a wall in Shoreditch, the hip district of east London, with tickets for the intimate gig released on the mobile ticketing app Dice.

So on a muggy Tuesday night the Betsey Trotwood, a traditional boozer in the capital’s fashionable Clerkenwell district, is filled with 150 millennials and gen Zers knocking back free pints before an evening of music billed to include the singer Rosie Lowe.

But the event – which turned away another 700 music fans –has an unlikely promoter: the vintage-style flyposters, beermats and pump clips bear the distinctive tree logo of luxury handbag maker Mulberry.

The British brand is trying to make a new generation of women fall in love with a brand their mothers lusted after thanks to the patronage of noughties taste-makers such as Kate Moss and TV presenter Alexa Chung.

Sipping wine outside the pub, 22-year-old Miriam Walters-Manneh has come along with her friend Joanna to hear some new music. “I spend a bit of money on fashion but I’m not religiously into it,” she says. “I haven’t bought a physical [fashion] magazine in years.” If the law intern had cash to spare, she says, she’d plump for a holiday rather than one of Mulberry’s brightly coloured Millie totes, which cost about the same as a long-haul flight. She is confused though: “Do we get to see the bags?” Oddly, the answer, is no. Not tonight.

At the moment times are tough for Mulberry: sales in the UK – its biggest market – fell 6% last year with the company slumping to a £5m loss, dragged down by last year’s collapse of the House of Fraser department store chain, an important sales outlet. The shares have lost two-thirds of their value in the past year, leaving Mulberry, founded by Roger Saul in 1971, valued at just £160m.

With prices starting at about £500, Mulberry’s handbags cost more than a monthly mortgage payment but are still deemed “accessible” in a £1tn global luxury market. While its far larger rival Burberry is moving even further upmarket to insulate itself from the high street’s woes, Mulberry – the largest manufacturer of luxury leather goods in the UK – continues to walk the tightrope of appealing to both the rich and to mid-market department shoppers who save up to buy its hard-wearing Bayswater bags.

Inside the pub, Ranji Hyare, a City lawyer with a striking red Saint Laurent shoulder bag draped over her arm, looks a better prospect to get Mulberry’s sales moving in the right direction. She is middle-aged with a handbag habit and has just ordered a Gucci bag embellished with crystals that costs an arm and a leg. She has never bought a Mulberry bag, though. “I don’t want to use the word boring but …” she tails off, before concluding: “I see it as a good, practical brand.”

With older Britons battening down the hatches in the maelstrom unleashed by the Brexit vote, a recent analysis of spending habits by research firm Mintel revealed that under-25s were now the most prolific buyers of designer clothes and accessories in the UK and other major luxury markets such as the US, Italy and France. The most successful names were the likes of Gucci and Louis Vuitton, which have cleverly plugged into the well-heeled among the Instagram generation.

But millennials and generation Z are a tough crowd to please as they want luxury brands to be accessible and exclusive at the same time, says the Mintel senior retail analyst Samantha Dover. “They want to buy brands that make them feel part of a community … but still want to feel like they are buying into something exclusive.”

The gig is one of several spread over the summer with the launch event attracting celebrities including Rafferty Law, the son of the actor Jude Law, and the model Kelvin Bueno. The tactic echoes the path trodden by Burberry, which worked with relatively unknown bands in its 2013 Burberry Acoustic sessions to build its credibility among the under-40s.

Fergal Newton, a musician and model, out for the evening with his friend Alexander Adair, was reeled in by the free drinks. The 18-year-olds, wearing vintage suit jackets and Converse high tops, are heading on to another free event in Shoreditch afterwards. Adair, a fashion student, tried to borrow his mum’s Mulberry messenger bag for the evening but “she wouldn’t lend it to me”.

The focus on nights out in traditional pubs is Mulberry’s way of highlighting its British heritage to shoppers, using a medium that can ricochet around the world on social networks. But some analysts wonder if the brand, already known for the enduring quality of the leather goods stitched together at its two Somerset factories, is trying too hard at a time when its calling card of classic design and traditional quality already chimes with the burgeoning market for sustainable, slower fashion.

“Music will always have a place in appealing to younger consumers but it is very hard to establish relevance with this Insta millennial market,” says Lorna Hall, the retail director of trend forecaster WGSN. “However there is a growing market for products that have longevity, are well made, and can be repaired and recycled at the luxury end of the market. All of these things apply to Mulberry. It already fits with the customer mood so the trick for the brand is to bring all these ideas together.”

Say the name Mulberry to fashion-savvy people of a certain age and they will probably think of its much-imitated It bag, the Alexa, named after the It girl Alexa Chung. Despite its £750 price tag, it was “recession beating” when launched in 2009. There was also the earlier £500 Bayswater, another example of classic British accessories design which, when touted by Kate Moss, helped the brand break from its 1980s “green welly brigade” reputation.

For a long time the bags were seen as a relatively affordable luxury – their price-points being in sniffing distance for some British women, and therefore lust-worthy. But there have been a few serious setbacks since Mulberry’s Chung-era heyday, especially former boss Bruno Guillon’s disastrous attempt to make the brand more exclusive – ie expensive.

Mulberry has now come out fighting, as it battles to remain relevant. The new boss, Thierry Andretta, is targeting the Chinese market and the digital generation, and with a renewed commitment to keep prices relatively low in the luxury market. Today two-thirds of its bags sit under the £1,000 mark.

Having Johnny Coca as creative director helps. A former Celine designer, much venerated in the fashion world, his bag designs were Celine’s most financially successful in years.

The bags are often seen on the arm of royals – Kate and Meghan are both fans. But they have broader appeal: actor Zawe Ashton wore one recently to the Serpentine summer party and singer-songwriter Jessie Ware touted one at a recent party, too.

The gigs in pubs are a smart idea in the authenticity and experience-hungry era of Instagram. Mulberry will be hoping to win new UK-based fans from gen Z who might be able to usher in a boost just as Moss’s patronage did in the past. The thinking feels right: while the bags do still feel relatively old school, if enough influencers in pubs post pictures of themselves, perhaps the brand will start to see the 2019 equivalent of the Moss effect yet again. Ellie Violet Bramley