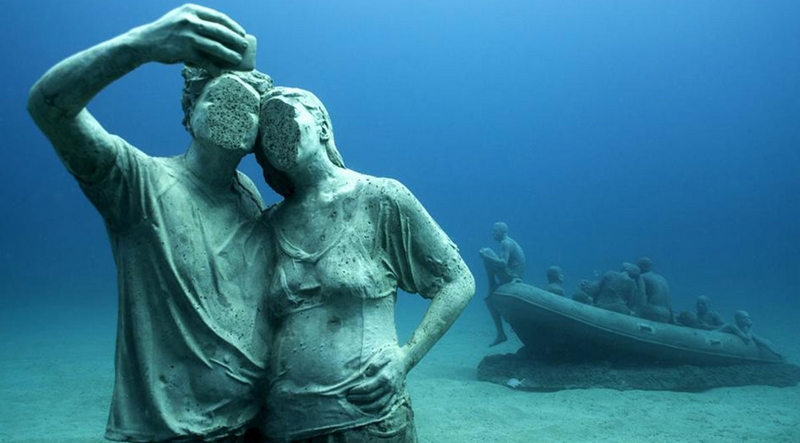 This article titled “Museum of underwater art to open on Australia’s Great Barrier Reef” was written by Antonia Wilson, for theguardian.com on Thursday 18th July 2019 12.57 UTC

From a colour-changing figure warning of warming seas to a sunken skeletal greenhouse encrusted with coral, a new museum of underwater art in Australia’s Great Barrier Reef marine park aims to raise awareness of the threatened ecosystem – and rehabilitate parts of the reef.

Created by British sculptor and environmentalist Jason deCaires Taylor, the Museum of Underwater Art (MOUA) will feature partially and fully submerged installations and sculptures that will become sites for coral and marine life regeneration.

The artworks will be at several locations along the Queensland coast, including the John Brewer Reef, and Magnetic Island, Palm Island and Townsville. The first, Ocean Siren, due to open in December 2019, is on the Strand in Townsville. The solar-powered sculpture of a young indigenous girl will change colour as a visual warning of critical warming, using live water-temperature data from the Australian Institute of Marine Science. It will be exposed at low tide and underwater at high tide.

“The Australian Institute of Marine Science has a series of temperature loggers around the reef. It will compile this data and feed it into the sculpture, so that changes in temperature will be seen in real time,” said deCaires Taylor.

As with much of his previous work, deCaires Taylor hopes the museum will help to shape public debate and inform environmental policy.

“Our oceans are going through rapid change, and there are huge threats, from rising sea temperatures to acidification, and a large amount of pollution entering the system,” he said. “Part of creating an underwater museum is about changing our value systems – thinking about the sea floor as something sacred, something that we should be protecting and not taking for granted.”

Other installations as part of the new museum will include the large-scale Coral Greenhouse (at John Brewer Reef), expected to open shortly after Ocean Siren. This will be planted with more than 2,000 coral fragments from marine nurseries, to help it generate a marine ecosystem.

“It will be installed just prior to coral spawning so will provide a new clean surface area for coral larvae to attach to,” said deCaires Taylor. “New species are being trialled including a range of temperature-resilient strains. The sculptures themselves are all made from a ph-neutral marine cement with a textured surface to help settlement. From past experience, works have begun to be colonised within a matter of days.”

Plans for the Geoffrey Bay site on Magnetic Island include art telling the story of reef science, which should be completed by January 2021. Close to Palm Island, an installation is being created in consultation with the local indigenous community with the aim of increasing tourism to help bring a much-needed economic boost to the area. This site, in Coolgaree Bay, is due to open in August 2020, and is likely to be accessible only with official tour guides.

“We spent 12 days with Jason surveying sites, looking for beautiful soft, sandy seabed where we can install the sculptures without doing any damage to the reef,” said Paul Marshall, chief environment officer at Reef Ecologic, one of the project partners. “We’ve also consulted with stakeholders, the community, businesses and government agencies, and spent time talking to indigenous communities, particularly those associated with Palm Island.”

More than two million people visit the Great Barrier Reef each year. The aim is for the new museum to be educationally relevant to scientists, locals and tourists.

“We all care about the reef, but to have fantastic sculptures – representing the reef, representing people – is a reminder just how fragile [the reef] is, and how we’ve got to look after it and treat it like a museum,” said Adam Smith, managing director at Reef Ecologic.

Previous deCaires Taylor projects have helped boost tourism around their locations and the new museum is expected to create jobs. The section of the reef close to Townsville currently sees fewer tourists than more northerly areas, near Cairns, where bleaching is more prevalent.

The project’s collaborators have also considered the potentially negative consequences of an increase in tourism to the region, according to deCaires Taylor.

“MOUA is looking at many operational models, from encouraging local visitors more than overseas ones, to electric power boats and providing stationary pontoons at the site to reduce the amount of travel needed,” he said.

The new museum is a not-for-profit collaboration which has been in planning for two years. It is being funded by national and local government, and corporate partners including James Cook University, the Australian Institute of Marine Science, in association with the Great Barrier Reef Marine Park Authority.

Last year, Coralarium, an intertidal installation created by deCaires Taylor at a hotel resort in the Maldives was demolished by authorities, after a court ruled that the human forms depicted in the work were anti-Islamic.