Depot Boijmans Van Beuningen is the first art storage facility in the world that offers access to a museum’s complete collection. 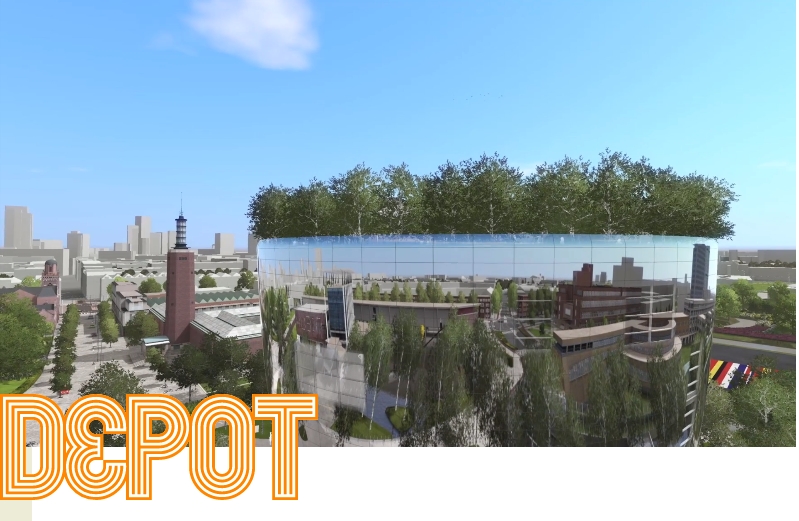 This article titled “The museum of everything: do you have time to look at 150,000 exhibits?” was written by Andrew Dickson, for theguardian.com on Monday 21st September 2020 10.07 UTC

From a block away, it looks like a craft from a more advanced civilisation has landed in the centre of Rotterdam. The structure is futuristic, with walls of mirrored glass curving up some 40 metres, reflecting the iron-grey clouds and the fractured city skyline. It wouldn’t be surprising if it had a tractor beam instead of a door. As I draw close, a middle-aged Dutch couple are debating whether they like it. They decide not, but snap selfies in front of it anyway.

Rotterdammers are used to high-concept architecture, but what makes this building unusual is its function: it’s a warehouse. Designed by the Dutch firm MVRDV and known as the Depot, it has been created for one of the most well-regarded art museums in the Netherlands, the Boijmans Van Beuningen. When I visit in mid-September, contractors are installing vitrines and polishing concrete floors; in December, art handlers will begin moving in the museum’s collection of Rembrandts, Boschs, Magrittes and Dalís – some 150,000 objects. It will open fully late next year.

In the atrium, Sjarel Ex, the Boijmans’ director, is wearing the look of a man who can’t quite believe it’s finally happening. “A treasure chest, no?” he exclaims, gesturing towards a dizzying lattice of glass stairwells above our heads. “Every single thing we have will be on display.”

To call the Depot a warehouse is, it turns out, to do it a considerable disservice: the building is an attempt to turn the Boijmans inside out. Instead of locking their crown jewels away behind closed doors, the institution has ploughed €55m (£50m) into an “open storage” facility in the heart of the city, right next to the main 1930s building.

An artist’s impression of the interior of the Depot. Photograph: MVRDV

Museums have dabbled with open or visible storage for decades. New York’s Metropolitan made some of its research collections available in the late 1980s, while the V&A’s 2009–10 ceramics galleries put some 26,000 objects on display in tall, tightly crammed glass cabinets. But Ex and his colleagues reckon this is the first time that anyone has built an open-storage facility to house an entire museum collection – early Netherlandish paintings to Renaissance silverware and De Stijl design. “Radical transparency,” Ex grins. “A little bit Dutch, I’m afraid.”

As we stride from the loading bay to the decontamination zone (“if a piece of furniture has moths, this is where we sort it out,” he explains), Ex rattles through the story. In 2013, the basement stores of the Boijmans flooded. Though the damage was mercifully minimal, it was obvious that the museum needed to upgrade, particularly given that 90% of Rotterdam is below sea level – and with climate change, the percentage is increasing.

But instead of erecting something in an anonymous industrial zone somewhere, Ex had the idea of turning the stores into a visitor attraction. There were already plans to close the main building for seven years for renovation – it’s due to reopen in 2026 – so this would also be a way of bridging the gap.

“What’s the English expression – ‘out of sight, out of mind’?” says Ex. “So much of what museums do happens in the dark. We wanted to bring some of it into the light.”

An appealing idea, but fiendishly difficult to pull off, architect Winy Maas tells me – light itself being a major problem. The museum was insistent that, even though the Depot is a public building, conditions should be as good, if not better, than a regular vault: super-high-grade air conditioning will make the environment dust-free, while the structure is divided into five “climate zones” for different kinds of artefacts (colour photographs need to be stored at a lower temperature than black-and-white prints, for example). While some pieces will hang on movable racks, or in 13 display cabinets placed through the building, light-sensitive objects will be kept in sealed cabinets and only inspected by appointment.

Ex doesn’t go into detail about security, but suggests that the building is more than a match for art thieves. “And which is safer, really?” he asks. “Putting your depot on the outskirts of a city, or having it right here in the centre, surrounded by people?”

There’s more at stake than technical questions about how best to care for fragile artefacts. Although few museums advertise the fact, what we see in their galleries is a tiny fraction of what they possess: the usual estimate is that 95% of most collections are locked away. Research done in 2016 by the magazine Quartz suggested that, in a sample of 20 museums, almost half the Picasso paintings were in storage, while far more Georgia O’Keeffes were in the vault (67) than on permanent display (36).

The problem, of course, is space. Some museums have expanded to make more of their collections visible: Tate Modern’s 2016 extension doubled its gallery capacity, while the redeveloped MoMA in New York now contains a leg-punishing 15,000 square metres of gallery space over six floors – more than a city block. The V&A has open-storage ambitions for its new offshoot in east London, scheduled to open in 2023: the plan is to have 250,000 objects accessible, added to the 60,000-odd currently on display, which visitors will be able to access through guided tours.

But collections, like the universe, are ever-expanding – partly because many public museums are forbidden from “de-accessioning”, or getting rid of artefacts. “Show me a museum that doesn’t have a storage problem,” one director tells me. “I’d love to visit.”

“It’s a real challenge,” agrees Pil Rasmussen, who runs the conservation department at Denmark’s National Gallery. “These collections are owned by the public, but the public cannot see most of them.”

Open storage is one solution, but has its own challenges. For a start, most museums don’t have the resources to build new facilities, particularly in the UK, where institutions have battled with shrinking budgets for at least a decade, putting many on life support, even before the coronavirus crisis hit.

Conservators are working away in public view – somewhere between restoration, performance art and a high-culture Big Brother house

“In redevelopment plans, storage and backroom facilities are often the ones that get cut back,” Rasmussen sighs. It’s as much as some places can do to make sure that existing objects are kept safely, never mind the extra resources it takes to show them safely to the public.

Some professionals also have a suspicion that, eye-catching as visible-storage projects are, they are more of a symbolic than a real change to the way museums operate. Does anyone have the appetite to see the 2.3m-odd objects and books owned by the V&A? How about the Smithsonian, whose 19 institutions possess around 155m artefacts, most of which are stored offsite around Washington DC? Where would you even start? Isn’t that what curators are for?

When I raise these points with Ex, he nods. “Sure. Projects like ours are an experiment. Will anyone come? Or will they come to the Depot, and not to the beautifully curated exhibitions we have in the museum?” He shrugs. “We’ll see.”

A train ride away from Rotterdam, another major institution is attempting its own version of radical transparency. For the last 14 months, Amsterdam’s Rijksmuseum has been conducting what it calls Operation Night Watch – a project to restore Rembrandt’s most famous painting while the rest of us look on. The painting hangs in its usual second-floor spot, but it’s been slipped out of its frame and encased in a giant glass box. Conservators are working away inside – somewhere between painting restoration, performance art and a supremely high-culture Big Brother house.

When I visit, the first stage of the exercise, producing an ultra-high-resolution image of the painting surface to analyse damage and chemical composition, is nearing completion: a robotic daylight camera whirrs across a gantry, pausing every so often to take a shot (a lower-resolution photograph, still 44.8 gigapixels big, is already online). Once conservators have studied the picture in microscopic detail, they will begin cleaning and repair – all in view of visitors. For the full Big Brother effect, you can watch everything live via webcam.

Rijksmuseum director Taco Dibbits concedes that locking The Night Watch in the conservation studio for years on end wasn’t realistic – it is the reason many thousands of people visit the museum. Restoring it on display has benefits, too. “For museums, the way forward is how you share research,” he suggests. “We sometimes underestimate how fascinated the public is.”

Though audiences won’t see the painting as Rembrandt intended for several years, they will gain something else: an insight into the difficulties of conserving a much-damaged, much-restored Old Master. “The history of an artwork like this is really complex. The questions are almost philosophical,” says Dibbits. “Dialogue helps.”

For both Dibbits and Ex, opening up marks a powerful shift in how museums see their role, particularly as they emerge from lockdown and re-evaluate their place in the world. Pushing backstage processes and personnel into the limelight is part of it (perhaps the easy part); institutions also need to be open about uncomfortable issues such as funding and ethics, staff diversity, curation and collecting policies, the provenance of disputed or colonial-era objects.

It’s a crunch point, Ex suggests: “We have to think much, much harder about transparency if we want to survive.”

Dibbits concurs. “The objects stay the same,” he says. “But how we talk about and show them – that really has to keep changing.”