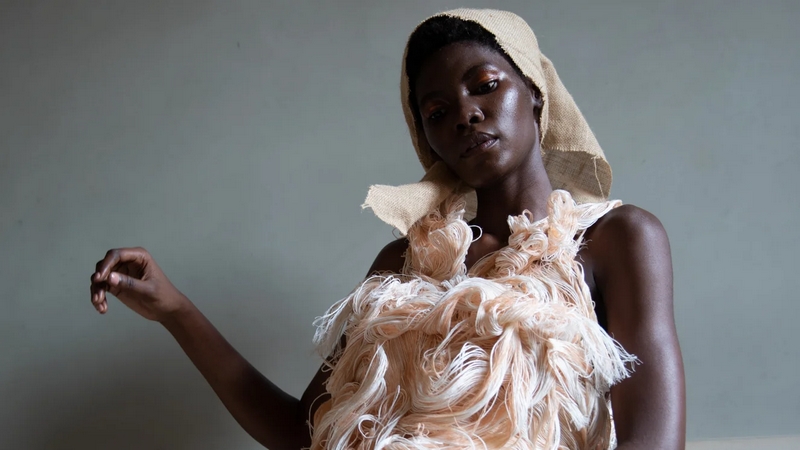 This article titled “We Are Made in Italy: digital fashion show highlights Italian diversity” was written by Jess Cartner-Morley, for The Guardian on Sunday 27th September 2020 17.01 UTC

The fashion designer Claudia Gisèle Ntsama’s cocktail dresses are a feat of engineering, their spools of unravelled thread seemingly suspended around the body as if held in a spider’s web. Ntsama, one of five little-known black Italian designers in the spotlight on the final day of Milan fashion week, supported herself by working as a cleaner while she created the collection, for which she cites the high-concept Japanese designers Junya Watanabe and Yohji Yamamoto as inspiration.

The Haitian-Italian designer Stella Jean, a protegee of Giorgio Armani who launched her label a decade ago, describes Ntsama as “a great talent of haute couture”. Jean, a campaigner for equality and diversity in Italian fashion, believes the challenges Ntsama has faced “render her story all that much more extraordinary and admirable, considering how sophisticated and at what a high level her work is executed”.

The digital fashion show We Are Made in Italy aims to highlight the systemic racism in the Italian fashion industry and “counter the misconception that to be Italian and a representative of Made in Italy is to be white. By presenting the names and faces of these new Italians, we are making a strong statement,” said Jean.

Most of the five designers have not yet been able to make a living as creators, having “tried for years to submit their CV in Italy, but never received a response”, Jean says. “I think this much tenacity and determination warrants a chance.”

The show was filmed among the gilt and chandeliers of Palazzo Clerici, one of Milan’s most splendid palaces, which features an 18th-century fresco by Giambattista Tiepolo, and live-streamed on the Milan fashion week channel.

Jean, Buchanan and Ngonmo believe that creating opportunities for black creative talent is a more substantive cause than promoting the diversity of models. Jean notes that in the wake of Black Lives Matter, “all of the companies ran to fill their model castings with Black models … There is no real correspondence with true change and actual integration in the workforce.”

Racism and cultural appropriation have proved endemic in Italian fashion. Both Gucci and Prada have used blackface imagery in recent collections. Dolce & Gabbana faced outrage for an advert that showed a Chinese model eating pizza and spaghetti with chopsticks. Earlier this year, Marni issued an apology for using a black model in imagery suggestive of slavery, saying that “as we endeavour to create a more equitable world … We sincerely regret that our efforts cause further pain.”

“The new Italy is multicultural and it cannot permit itself to continue to appear racist in the eyes of the world as a result of the errors of a few, which in turn become a stigma for everyone,” says Jean. “Fashion lives on progressiveness and it simply cannot fall behind. Even a field like football that could hardly be regarded as avant-garde had the courage to admit that our country has a huge problem with racism … and they bravely implemented severe measures to work against it.”

This was the second initiative organised at fashion week by the Black Lives Matter in Italian Fashion collective, who also brought together brands including Armani, Gucci, Prada, Salvatore Ferragamo and Valentino at a thinktank earlier in the week. At that event, Myriam Miller, an 18-year-old activist, challenged the brands to act on the support they had shown on social media for Black Lives Matter. “You all promised us the world with those black squares. Why are you staying quiet now?” asked Miller. “You boasted about support that never reached us here in Italy.”

The two events represent victories for Jean, who was frustrated by the initial response of Italian fashion’s governing body to her proposals for positive change. A reply from Carlo Capasa, president of the Italian Fashion Chamber, described the initiatives Jean suggested earlier this summer as “not in our sphere of responsibility”, suggesting they “pertain to government and other bodies”. However, Capasa recently told Womenswear Daily that he had “quickly embraced” Jean’s proposal for the We Are Made in Italy showcase. “We were thrilled to be able to include this content, to offer an opportunity and be increasingly more inclusive.”

“I am happy to say that President Capasa has already taken action and is keeping his recently made promises,” Jean said.