Memphis: Plastic Field exhibition (2 December – 25 April 2021 at mk gallery) will explore the subversive and irreverent spirit of the Memphis Group, bringing together over 150 of the design collective’s most significant objects whose bold and playful look pushed boundaries and sparked a new era in International design. 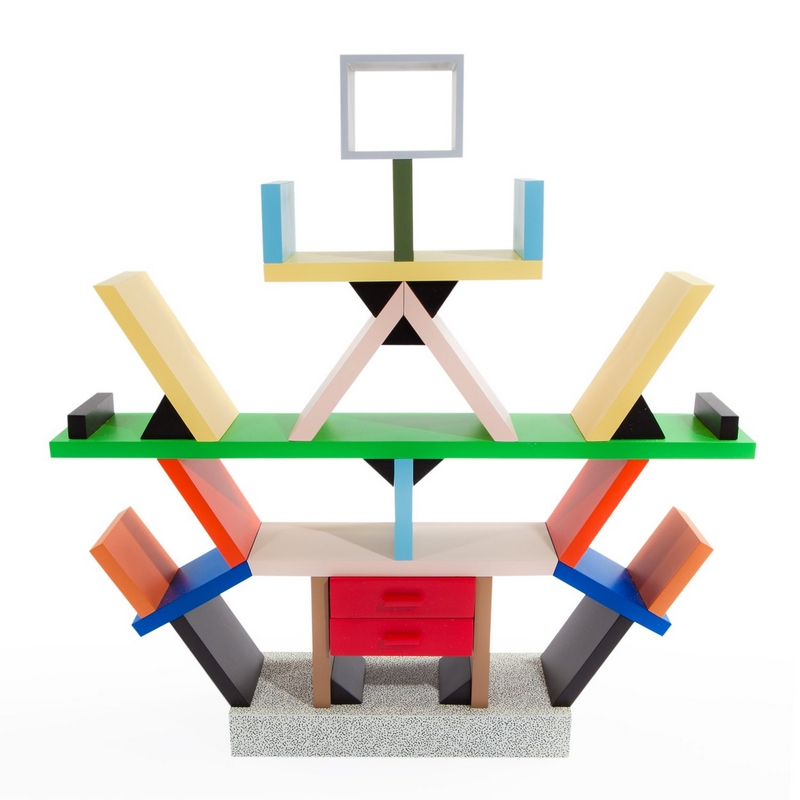 This article titled “An MDF bookcase for £12,000? The jolting genius of design superstudio Memphis” was written by Oliver Wainwright, for The Guardian on Tuesday 1st December 2020 06.00 UTC

With its comic-book colours, gaudy patterns and paper-thin veneers, the work of Italian design group Memphis has rarely looked as at home as it does in Milton Keynes. The first glimpse you get of the garish thrills in store in this new exhibition is through a big picture window, punched into the side of the corrugated mirror-polished box of the MK Gallery. Shining out between the building’s bright yellow loading bay and red spiral staircase stands the Carlton, a bookcase-cum-room-divider-cum-shamanic-totem, in all its crazed glory. Designed by Ettore Sottsass in 1981, and collected by the likes of David Bowie, Karl Lagerfeld and Cara Delevingne, it has become the symbol of a brief moment in Milan when a group of designers stuck two fingers up at good taste – and changed the world of design for the next four decades.

For its UK showing, this touring exhibition couldn’t have picked a better location. “Part of our role,” says the MK Gallery director, Anthony Spira, “is to remind people that Milton Keynes comes from a really interesting cultural moment.” Before you snort, he’s got a point. The planners of this denigrated new town were plugged into the avant garde of contemporary design and radical urban theory in the 1970s. “They were reading Domus magazine in the development corporation,” he says. “I’ve always thought of the mirror-clad grid of Station Square as a homage to Superstudio [a radical Italian architecture group].”

Following an earlier exhibition that touched on 70s cultural currents, this show thrusts visitors headlong into the power-dressed decor of the 80s. For those who lived through it the first time around, it might all be too much to stomach. But for younger viewers – and anyone with a fondness for the era – it is a luscious feast of eye-searing colours, polished synthetic surfaces and clashing patterns, executed with brash, swaggering brilliance. After endless weeks of culturally bereft lockdown and dark encroaching evenings, this is exactly the saturated, joyful tonic we all need.

The first room sets the tone, with alien ceramics perched on a coffee table with iridescent green sparkly feet, alongside a bed seemingly made from children’s geometric building blocks, and a palatial dressing table studded with lightbulbs and crowned with a glossy black pediment. A wardrobe stands in one corner, its surfaces crawling with blotchy red and yellow patterns, arms radiating in all directions, while a bedside table with blue insect-like legs looks ready to scuttle across the room.

“Bastard situations” is how Sottsass, the charismatic leader of the Memphis group, liked to describe these strange assemblages, revelling in the jarring effect of unlikely couplings of form and material. He had travelled widely, and drew inspiration from Rome to Tahiti, LA to Mesopotamia, combining pop art and primitive forms in a heady pick-n-mix collage. “It must be possible to design instability,” he said, intending that a piece of Memphis furniture would give a supercharged jolt to any room brave enough to accommodate it. As designer Michele De Lucchi said: “One bookcase by Sottsass is enough to furnish a room.”

The international scope of the group brought its own diversity of influences, too, with pieces like the robot-shaped Ginza cabinet by Japanese designer Masanori Umeda, and the Bel Air armchair by Californian designer Peter Shire, part perched on a beachball, as if fresh from the surf. The group rejoiced in a cheeky mashup of high and low culture, sampling from the world’s rich cultural buffet with relish. As Memphis member and critic Barbara Radice wrote: “Memphis colour is comic-strip colour, plastic colour, hotdogs, sundaes, artificial raspberry syrup colour. It is washed-out, cheap gouache colour, ridiculous colour, naive colour, third-world colour. In any case, whether it is picked up in California, the lower Mediterranean, Africa or Brianza, it is motel colour, suburban colour, five-and-dime colour.”

Like any cultish collective, Memphis came with its own foundation myth. The story goes that, on 11 December 1980, a gaggle of young designers, mostly in their 20s, were lounging around in the smoke-filled Milan apartment of Sottsass, who was already an established designer in his 60s. The wine was flowing and Bob Dylan’s Stuck Inside of Mobile with the Memphis Blues Again was on repeat. “Mobile” is the Italian for furniture, while the name Memphis at once conjured American glamour, as the city of Aretha Franklin and Elvis Presley, and timeless mysticism, as the capital of ancient Egypt. Sacred and pop, ancient and contemporary, the name had everything the group wanted to “strike a blow against current circumstances, and the weary ‘good taste’,” as Radice put it.

The rebellious designers were sick of insipid, po-faced modernism, which they felt had run its course, and disillusioned by the Italian radical movements of the 1960s and 70s, which held great promise but had ultimately come to nothing. And they were not alone: there was clearly an appetite for something new. The launch of their first collection, held in Milan in 1981, attracted a riotous crowd of 2,500 people. Images of their flamboyant furniture quickly spread around the world, catching the ostentatious postmodern spirit of the moment.

“They were very media-savvy,” says curator Fay Blanchard. “They were conscious of making work that photographed well, with really high contrast and saturated colours that jumped out of the page.” Like modernist architects before them, always mindful of how their buildings would appear in black and white photography, Memphis took advantage of the availability of full-colour glossy printing, producing designs that popped with the cartoonish zing of a Roy Lichtenstein painting.

Movies did a lot for their brand, too, although perhaps not in the way that they hoped. One section of the exhibition is given over to a video wall that shows quite how ubiquitous Memphis furniture became in evoking a particular mood in films and TV shows. In the 1986 black comedy Ruthless People, Danny DeVito plays a vile clothing tycoon who made his fortune as the so-called “spandex miniskirt king”. His lavish Bel Air mansion is kitted out with the full gamut of Memphis furniture , a colour-blocked fantasy of toy-like chairs and squiggle prints, all deployed to show quite what a horrible person he must be. Begun as a witty provocation, Memphis soon became a byword for tacky opulence, a status symbol desired by nouveau-riche yuppies.

It is a status the designs gained in the most part because they have always been so ridiculously expensive, occupying the plinths of rarefied design galleries rather than regular furniture stores. These are art objects that you can also sit on, sculptures that you might happen to be able to place a book in. A Carlton bookcase may be made in the same way as your trusty Ikea Billy – MDF sheets covered in laminate – but it will set you back over £12,000.

The elevation of cheap materials to a luxury realm was part of the point. As Sottsass remarked: “Why should laminate veneer be only for the kitchen and bathroom and not for a luxurious living room?” But there was always an uncomfortable contradiction with Memphis ideology. The group professed to have mass-market intentions, yet their designs were so labour intensive, involving meticulous hand craftsmanship, that they could never hope to be sold at affordable prices. Their 1983 collection was the closest they got to designs intended for mass manufacture, with De Lucchi’s First chair (yours for £1,140), George Sowden’s Palace armchair (£1,034) and Sottsass’s Park Lane coffee table (£6,000).

For design fans, it is a real treat to see all of these pieces brought together in one place – with more than 150 objects in total – but, if there is a criticism of the exhibition, it is that it feels too much like a trade show. There is no additional archival material, no drawings, correspondence, or contemporary ephemera, to help bring the story to life. It is all laid out like a Habitat store, except sitting is strictly forbidden. But perhaps the commercial, consumerist feeling is apt. As Radice wrote, Memphis was “a strange, hybrid, iridescent animal that moves indiscriminately in and out of museums, department stores, galleries and showrooms”.

Every piece has remained in continuous production since the 1980s, but Memphis was never a commercial success. Dismissed as whimsical kitsch for much of the puritan 90s and 2000s, the style has enjoyed a resurgence in the past decade, inspiring a new generation of designers, from the dazzling furniture of Yinka Ilori, to the murals of Camille Walala, and the projects of Office S&M and Adam Nathaniel Furman. It is a welcome return of colour, ornament and wit to our surroundings, providing a shock dose, in the words of Radice, of “aerobics for lazy or drowsy cells”.

• Memphis: Plastic Field is at MK Gallery, Milton Keynes, from 2 December until 25 April.