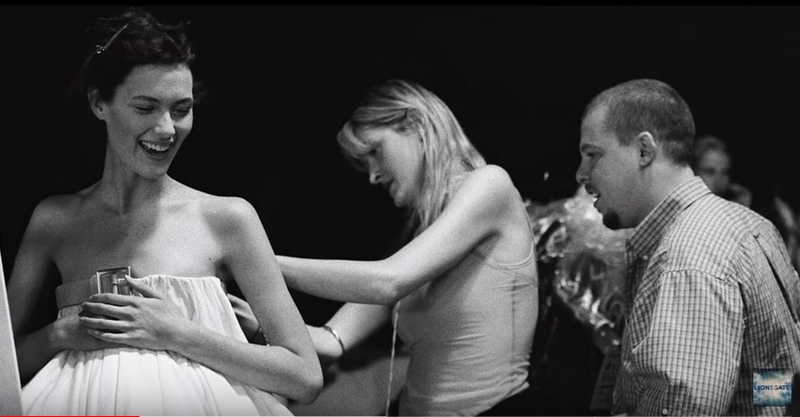 This article titled “McQueen directors: ‘Fashion creates icons, then isolates them'” was written by Edward Helmore, for theguardian.com on Thursday 7th June 2018 09.26 UTC

Before there was Sarah Burton’s Alexander McQueen, the chic, highly finessed and now financially successful fashion label, there was the Alexander McQueen of its namesake that – as this touching new documentary tells it – could barely sustain the creative dysfunction its creator and his companions wrought upon it.

The man at its core, we know, killed himself aged just 40. What story is left to tell? McQueen left behind five distinct silhouettes, or reimaginings for the shape of clothing on a woman’s body: more than Givenchy, Dior, Chanel, Saint Laurent or any other designer, according to the film’s co-directors Ian Bonhôte and Peter Ettedgui.

The pair spent a year refashioning existing film of McQueen and his protector-antagonist Isabella Blow, and threading it through with new interviews with McQueen’s family and surviving, if somewhat shell-shocked, collaborators.

The result, in the opinion of Vogue international editor Suzy Menkes is “the most sensitive vision about a creative who never lost his rough edges, and who put his life – the bloody history of distant warriors in Scotland and childhood abuse within his family – on stage.”

On this journey, we learn that fashion is probably best admired as a playground for creative people to exercise restless and highly stimulated imaginations. McQueen thrilled and terrified his models and clients: a perspiring, huffing beast coming at them with giant tailors’ scissors, wildly cutting at fabric as they stood in the designs. That such people should also swing between intense highs and lows – often to the bewilderment of those around them – should come as no surprise.

“Lee [Alexander McQueen] and Lee’s quality of work needs a big canvas,” says Bonhôte. “This we hope is the first to emotionally inform people into Lee’s journey and his life.”

Ettedgui says there were two questions to answer: how did he become the golden boy of the fashion industry; and why, when he was at the top of his game, did he decide life was not worth living? “We were deeply moved by that story,” he says. “The emotions that he created in us – the exhilaration of the early part of the story, or the tragedy toward the end – are what we wanted to put up on the screen.”

It is not clear even that McQueen and Blow, who preceded him in death by mere months, should be mourned in the traditional sense; both are more successful and better understood from beyond the grave than they were ever this side of it. That is not to say they aren’t missed, intensely in some instances. In some ways, it may be a better way to enjoy the joyful, deluded follies of their adventures.

In New York City, when McQueen came to show off his bumster collection – one of his first to gain widespread attention – a model was directed to lurch, mad-cow like, down the aisle in a Lower East Side synagogue. The designer also directed the PRs to slow Vogue’s Anna Wintour and her then sidekick André Leon Talley’s entry to the show. Blow admonished her rebellious protege: “You’ve got to make an effort with her.” Nonetheless, Wintour would later become a champion for McQueen.

“As he said it himself, he loved having the opportunity to prick the bubble of the fashion world,” says Ettedgui.

Nor is it hard to see why Blow so adored him, and why she was so devastated when he cast her off on signing with a more professional house, Givenchy, then under the direction of Tom Ford. It had, after all, been Blow’s wheeze to get Ford to buy McQueen for the Gucci Group. The deal financed McQueen but by then Blow was judged to be unsuitable and, aggrieved, reinvented herself elsewhere.

As it turned out, in some ways, McQueen wasn’t so suited to the fashion life. Or perhaps he was too well-suited. Either way, the documentary speeds up here, as it should, and speeds lightly over his drug problem, his decadence, his efforts to change himself and his appearance, his rages and problematic relationships. He drove himself to work harder. “The fashion industry’s need to reinvent is relentless,” says Bonhôte. “It creates icons, and then isolates them.”

McQueen, says Ettedgui, explained it himself. Asked by former Vogue contributing editor and novelist Plum Sykes why he conformed to the fashion system and its frenetic pace when he could, in his position, set his own agenda, the designer said simply “because I’m so fucking insecure”.

“The person who put the most pressure on McQueen was McQueen,” says Ettedgui. “We certainly picked up on a lot of finger-pointing but the answer is not as passive as ‘Lee was a victim of the fashion industry.’ It’s much more nuanced than that.”

Ultimately, his legacy must be the clothes. When you look at the impact of the V&A and Met’s Savage Beauty exhibitions, which were record-breaking on both sides of the Atlantic, people really started to analyse him technically, Bonhôte says. “The five silhouettes he left behind are potentially more than Saint Laurent or Coco Chanel, and that puts him right at the top.”

McQueen is in UK cinemas on 8 June