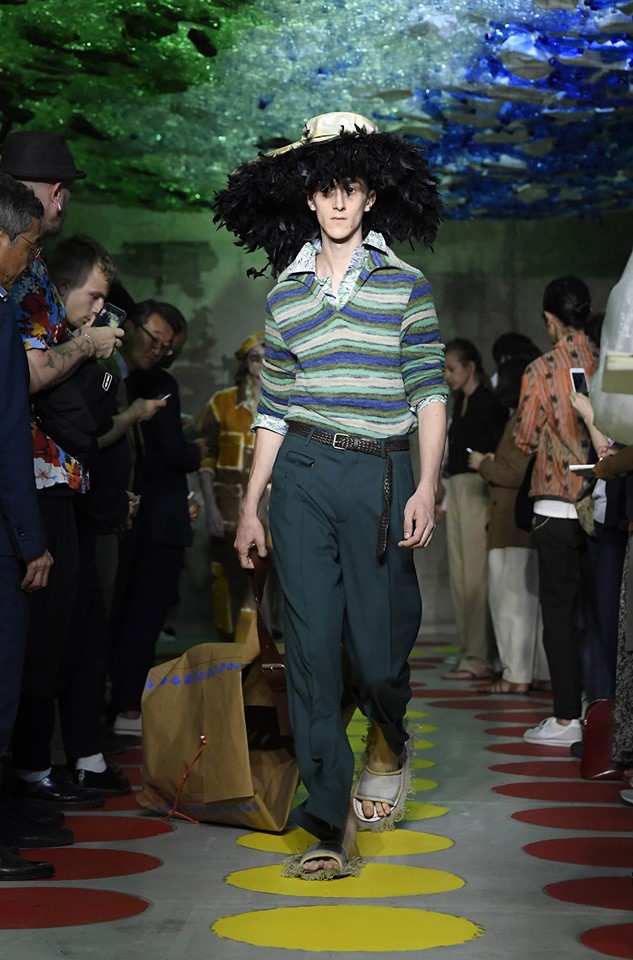 This article titled “Marni designer Francesco Risso shows his ‘humanistic’ side” was written by Scarlett Conlon in Milan, for theguardian.com on Sunday 16th June 2019 01.12 UTC

It took four days of Italian menswear shows – between the Pitti Uomo showcase in Florence and the fashion capital Milan – for a household-name brand to use its precious moment on the world stage to engage in the conversation about the ethical context in which fashion exists right now.

At the Marni spring/summer 2020 show on Saturday afternoon, creative director Francesco Risso had the audience stand shoulder to shoulder, rather than sit, under a suspended ceiling of backlit, disregarded plastic waste. His team at the Italian fashion house have spent months sourcing from industrial sources and the oceans. Imposing and strikingly beautiful, it was to reflect “the weight of this plastic that we’re feeling right now”, he told the press post-show. This being the first of “two acts”, the waste will be recycled into something new, in collaboration with the artist Judith Hopf, for “act two”.

The collection was anything but a nightmare – on the contrary, it was a celebration. The marriage of Truman Capote and Ernesto ‘Che’ Guevara to be precise, and accordingly everyone had a party hat. Risso collaborated with the artist Shalva Nikvashvili – who used discarded furs, leathers and rubbish to make “the wedding hats” which came stapled together. However, like many designers faced with scrutiny over supply and production chains, he is wary of coining it sustainable.

“I feel itchy when I hear the world sustainability, because no one can be sustainable one hundred per cent – even Greta Thunberg with her plastic yellow coat,” he laughed. “But each little step is a change and that’s why we are here standing together. It’s about standing up [and] transforming what we have.”

Like Clare Waight Keller’s headlining Givenchy show three days before him in Florence, Risso worked with opposing ideas to create this collection. It was “a study in clashes, and the uneven harmony that ensues by mixing opposite worlds, jumbling it all together”, read the show notes.

Plaid patterns and block prints mingled in the artsy, haphazard way that has become Marni’s calling card; suiting and trousers were split with contrasting fabric and hybrid waistlines; and the classic camo motifs that came on boilersuits, neckerchiefs and lacerated army jackets were jolted by an explosion of colour which Risso said was inspired by the Fauves. In his own words it was “camo versus carnival”.

Risso didn’t want the takeaway to be political; “it has nothing to do with politics,” he insisted – preferring to frame it in a humanistic context, but it was hard to take away anything but. “It’s more humanistic,” he explained. “We wish politics was more involved with human rights and goodness but it’s not, so it’s us that has to take a stand. Everyone has to do it in their own steps and little by little.”

It was better for it. Fashion, and the Milan fashion week schedule particularly, has designers like this to thank for injecting relevance and integrity. This is a brand whose raison d’etre has always been rooted in reality, a sartorial vehicle for offering commentary on pop culture, art and the world at large. It’s a brand that attracts people who know the difference between great design and a gimmick and want to walk the walk, rather than just talk the talk.

Risso, 36, who has designed womenswear and menswear for the OTB-owned house for three years to critical acclaim, is speaking for everyone who wants fashion to be intelligent and involved, and should be commended for not shying away from the conversation.