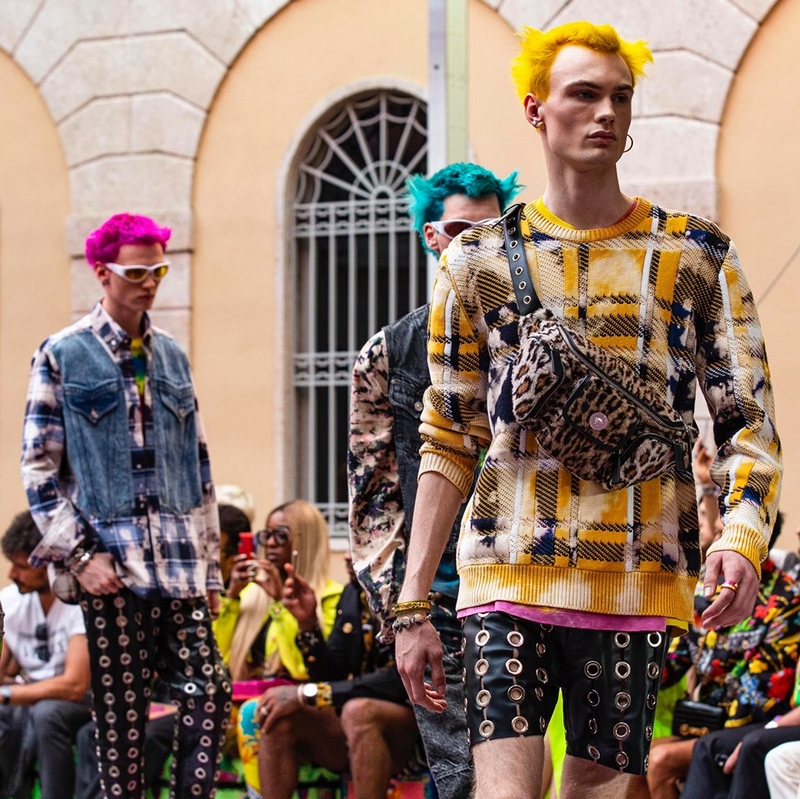 This article titled “Donatella Versace pays homage to the Prodigy’s Keith Flint in Milan” was written by Scarlett Conlon, for theguardian.com on Monday 17th June 2019 11.05 UTC

From one 90s superstar to another … Donatella Versace dedicated her spring/summer 2020 menswear show to the Progidy’s Keith Flint in Milan at the weekend. The designer described the musician, who died in March this year, as “my friend, and a disruptor of this world”.

Homage was paid through the pounding soundtrack of the band’s monster hit, Firestarter, and models bearing his distinctive double mohawk and tinted bug-eye sunglasses. Although the revelation that Flint and Versace were friends may have come as a surprise, it’s not an incongruous pairing; Versace has been something of a disruptor herself. Picking up the mantle of the family business her brother, Gianni, established in 1978, she embraced full-blown sex appeal in her collections from day one, and has admitted in the past to not knowing how to do things quietly. Last year, she surprised the world when she announced that she sold her family company to Capri Holdings – formerly known as Michael Kors Holdings.

Less than a year into the merger, it is a bit early to say how that is going from a business perspective. On the catwalk, however, it is very much business as usual. Versace described her next-season muse as “a slightly more serious guy” just before the show, adding that she wanted to celebrate the moment “a young man becomes a man” which for her comes the ceremonial purchase of their first car. Models walked around an XL black car covered in purple flowers, wearing suits, shirts and double denim emblazoned and appliqued with car prints – a continuation from last season’s collaboration with Ford.

Continuing a theme from the womenswear show in February, looks featured vintage fragrance advertisements from the brand’s archive. We were told, post-show, that this was a nod to rediscovery; another tribute to the brand’s past without being too obvious. Other themes in this collection didn’t play the same game. The bondage look, which has been synonymous with the house since Gianni’s 1990s collections, appeared via black leather trousers with all-over eyelets and whipstitched seams.

The memory of Donatella’s brother was, as ever, evident throughout, with his signature appearing on ties, socks and in all-over Swarovski applique in skintight jersey. Moving the handwriting of the house forward, she adapted its signature baroque print – usually seen in black and gold – into acidic pastels. Tailoring, meanwhile, was softened with a less rigid fit on blazers and bootleg jersey trousers – like the ones Versace favours herself. Versace “doesn’t like to talk about gender fluidity, more interested in the fluidity of masculinity”, said the company, post preview.

The CEO of Capri Holdings, John D Idol, has made clear his plans for the brand’s evolution: there are plans to increase the number of Versace shops from 200 to 300. He added that “with the full resources of our group, we believe that Versace will grow to [sales of] over $2bn”. For her part, Versace is showing she intends to keep up her creative side of such expansion.

For the rest of the collection, they went further afield. The set was transformed into an elaborate jungle rainforest which featured a lifesize leopard and jaguar on the stage (not real, but made from sisal by the artist Anne Andersson, and borrowed from the designers’ private collection) and which led on to a 40-yard leopard-print catwalk.

On it, the collection was an amalgamation of several themes: baroque, pin-ups, polka dot and the 1950s, we were informed. Retro sports jerseys – including baseball, tennis, golf, rugby and boxing – were reimagined in lace “to make it more sexy”, said Gabbana backstage before the show, and emblazoned with messages such as, “Choose me”, “Take a look” and “Only good vibes”. Elsewhere, khaki dominated the 119-look show, appearing in uniform-fresh, box pleated separates.

The duo’s adopted decade was a dominating theme throughout, but, while it may be an era be a decade ripe for mining classic sartorial codes, some – such as the wide-lapelled double-breasted suits, knitted polos, Cuban-collared shirts and pleated trousers seen here – are naturally less problematic than others in our woke world. Such expeditions, like those evoked by the khaki section of this show, in the faraway jungle setting conjured voyager vibes which, these days, tend to get talked about in a colonial context rather than recalled in such a way on the runway.

Of the setting and direction, Gabbana said before the show: “Fashion is beautiful because you change every season.” Different, but familiar, this was a collection that was distinctively Dolce & Gabbana.