Representing renewal, the Rat is the first sign in the Chinese Zodiac calendar. A symbol of passion and ambition, the sign of the Rat will take center stage in 2020 according to the age-old Chinese calendar. 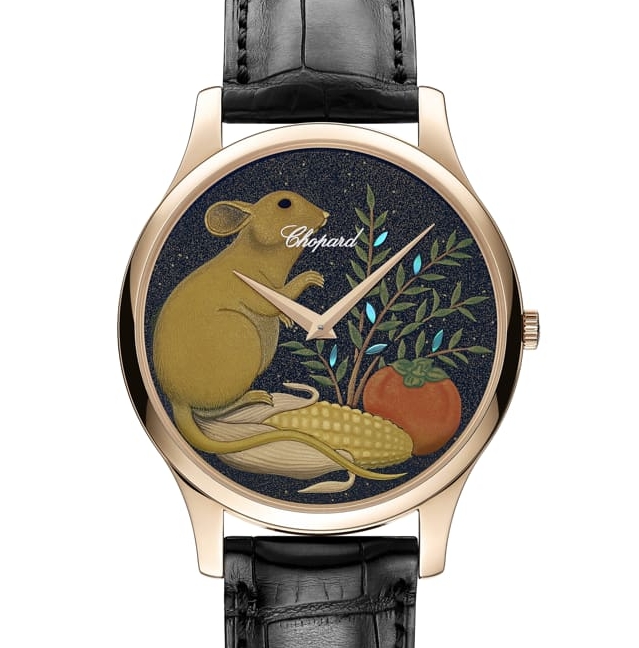 Chopard is once again honouring Asian traditions by calling on the ancestral Japanese art of Urushi to create the dial of the L.U.C XP Urushi Year of the Rat timepiece. This work of art highlights the theme of the next zodiac sign in the traditional Chinese calendar: the Rat, renowned for its intelligence and perspicacity.

Each of the watches in this refined and powerfully symbolic 88-piece limited edition crafted in 18-carat rose gold is powered by an ultra-thin movement produced in the Chopard Manufacture workshops: the L.U.C 96.17-L calibre. 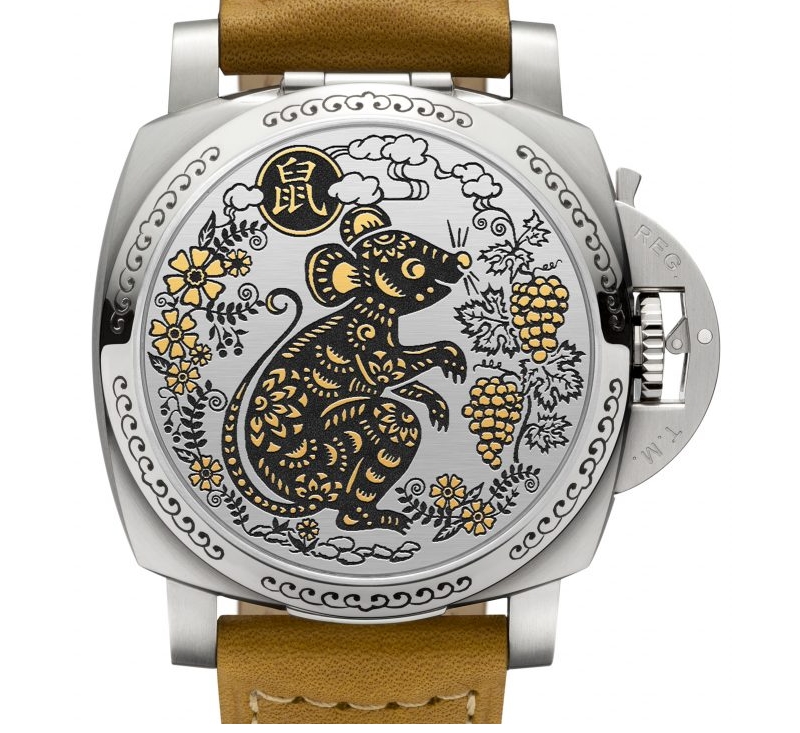 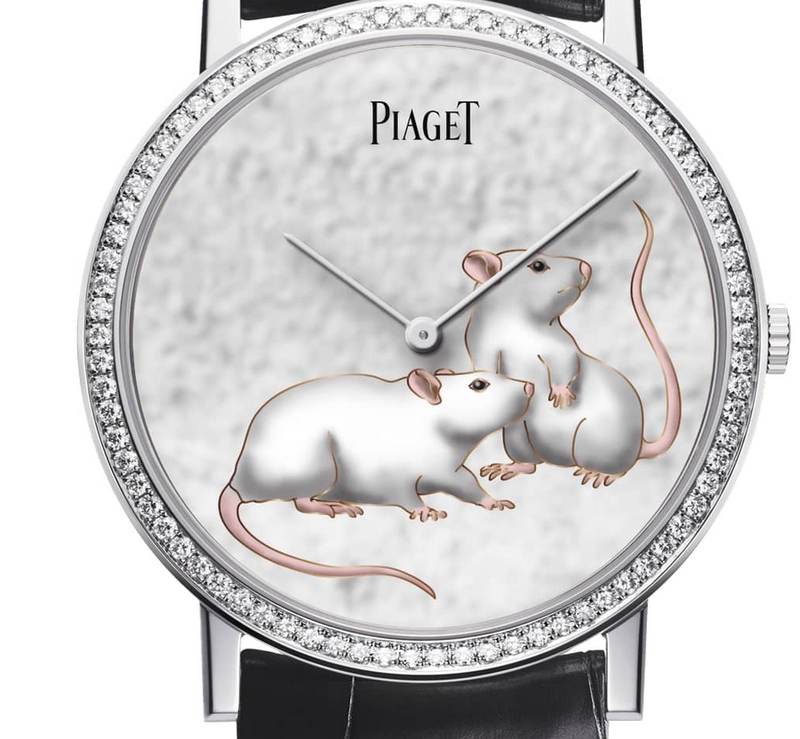 Piaget Altiplano Year of The Rat

Since 2012, Piaget has been celebrating the Chinese New Year with a limited edition Altiplano inspired by Chinese astrology. Created in cloisonné “Grand Feu” enamel by artist Anita Porchet, the dial in delicate light grey tones pays homage this year to the zodiac sign of the Rat. The delicate 38 mm diameter white gold case featured on this Swiss watch is set with 78 brilliant-cut diamonds and houses the Manufacture Piaget 430P, with the ultra-thin hand-wound calibre indicating central hours and minutes. A limited-edition of 38 timepieces, this ultra-thin luxury watch presented on a black alligator-skin strap with ardillon buckle, is exclusively available in Piaget Boutiques. 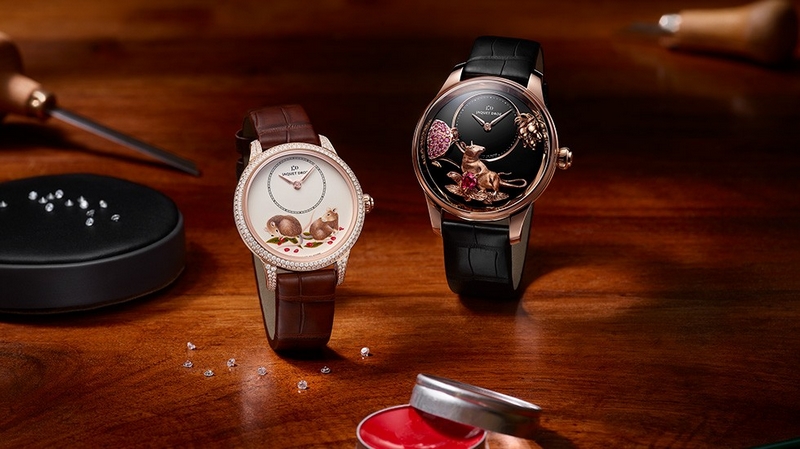 Jaquet Droz is shining the spotlight on its Ateliers d’Art by featuring four variations of its Petite Heure Minute watch that celebrate the sign of the Rat. To celebrate this special year, four limited series have been created by Jaquet Droz.

In each of these creations, Jaquet Droz has paired the Rat with the pomegranate, which has been regarded as a symbol of life and fertility since ancient times because of the many seeds contained within it.

For the 41 mm version, the Petite Heure Minute is available in two other animal-inspired variations that explore the same theme yet feature an onyx dial in a shade of black that is as pure as it is intense. This incredibly deep black serves as the backdrop for a Rat holding a pomegranate in its hands. These two prestigious pieces are crafted in either red gold or white gold (case, rat, hands, and oscillating weight engraving). In addition, the white gold version is set with 272 diamonds that illuminate its ring and pallet lugs with radiant sparkle while creating contrast with the dark intensity of onyx.

Each of these creations has been issued in a strictly limited edition of eight pieces, in keeping with the purest tradition of Jaquet Droz’s Numerus Clausus artistic creations. 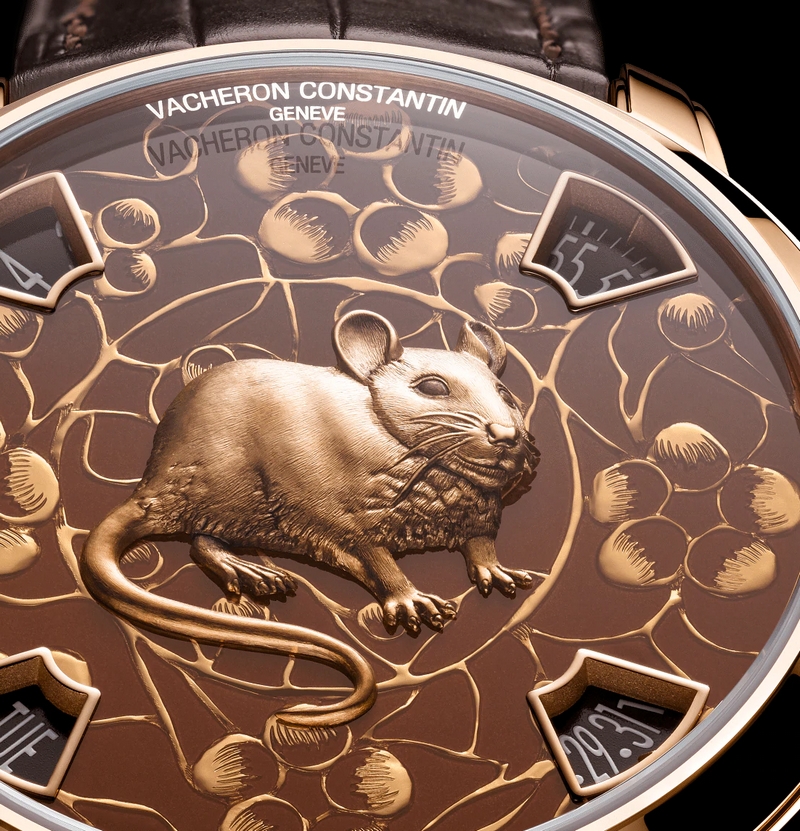 Celebrating decorative techniques applied in watchmaking and jewelry, the watches in the Vacheron Constantin‘s Métiers d’Art collection find their inspiration in art, history, and even Chinese Zodiac. The Swiss Haute Horlogerie manufacturer continues the traditions of watches dedicated to the Astrological Signs. With a Grand Feu enamelled 18K gold dial, Vacheron Constantin Metiers d’Art The Legend of the Chinese Zodiac – Year of Rat timepiecs is entirelly hand-engraved. The zodiac sign is hand-engraved platinum applied. the first of all zodiac animals. 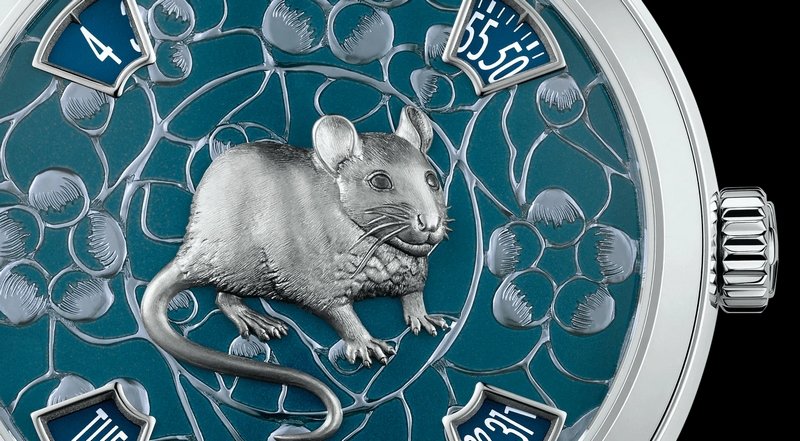 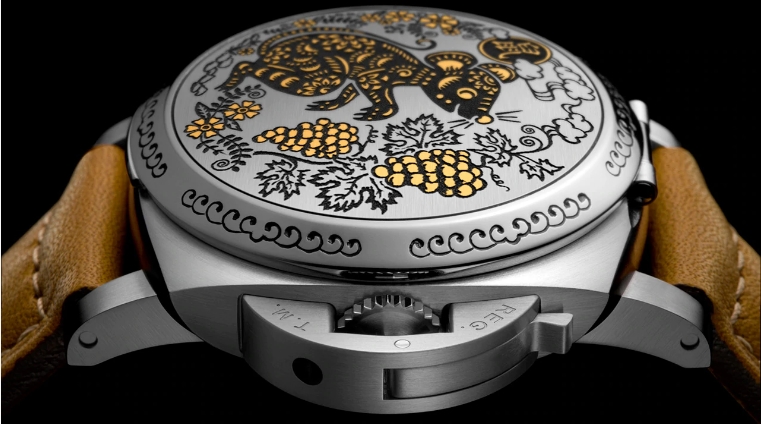 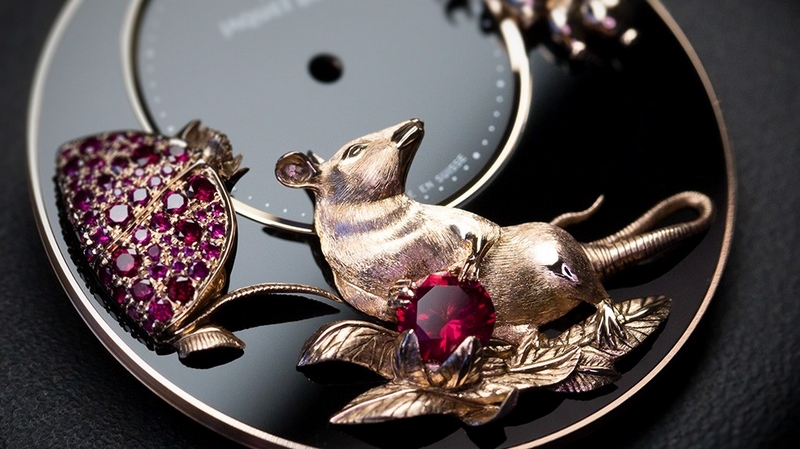 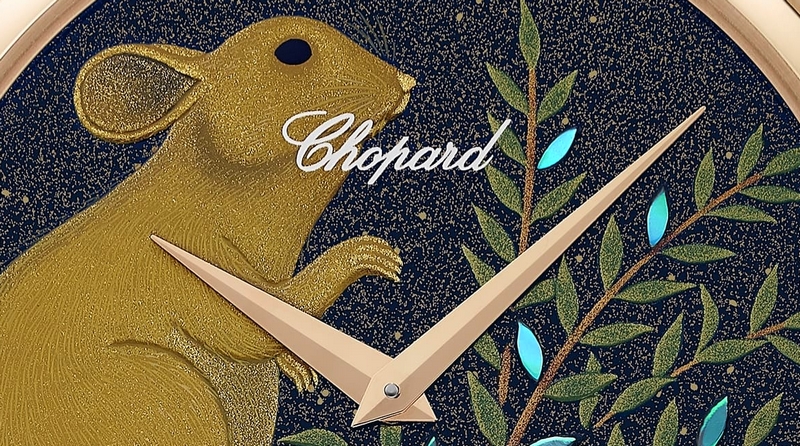 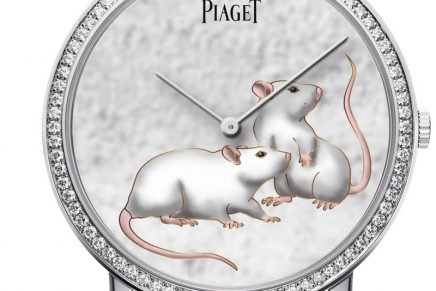 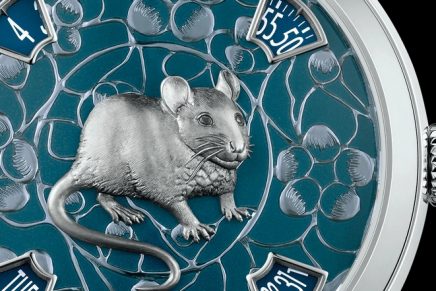 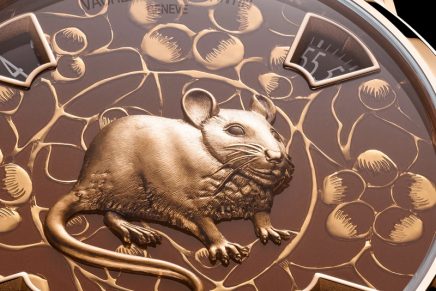 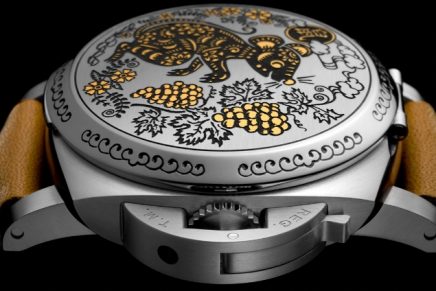 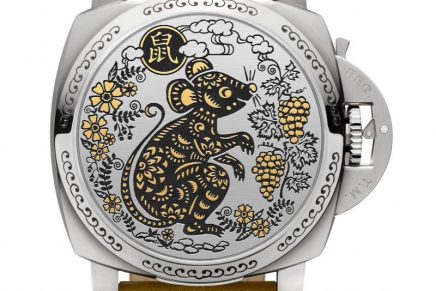 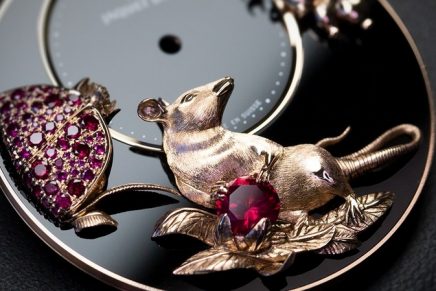 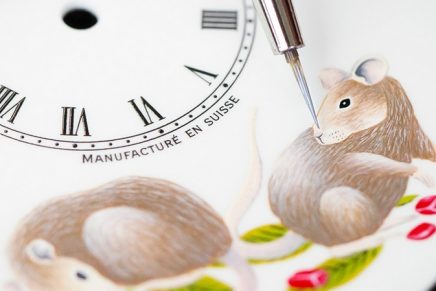 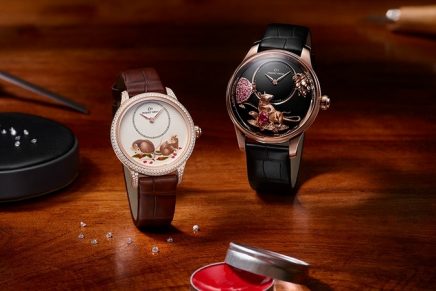 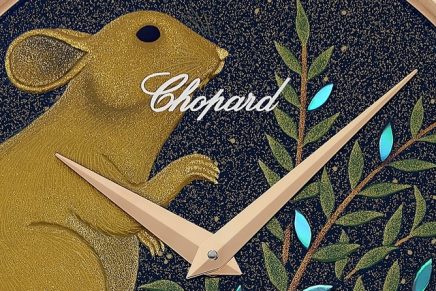 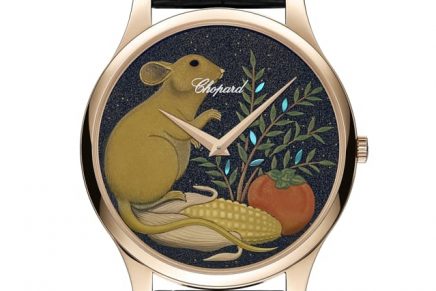