“No one interested in fashion, style, or the high-flying intrigues of café society will want to miss the exuberantly entertaining oral biography Loulou & Yves: The Untold Story of Loulou de La Falaise and the House of Saint Laurent, by Christopher Petkanas. 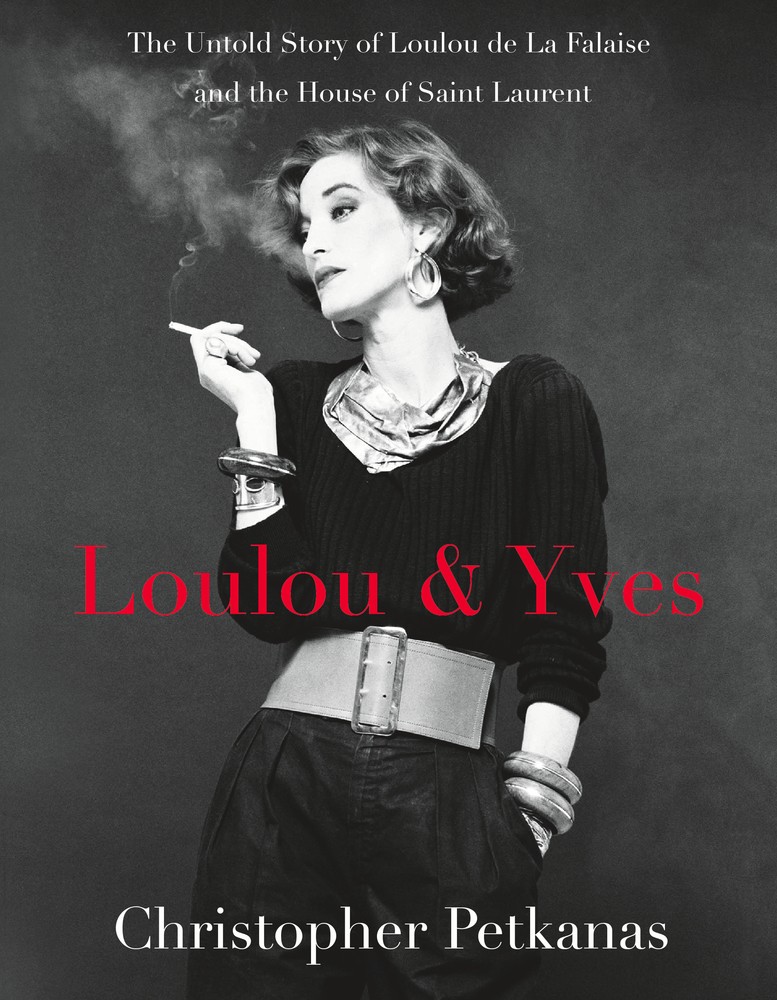 Loulou de la Falaise, a woman whose Wikipedia entry starts by describing her as “a fashion muse”, always gave the idea short shrift. “To me, a muse comes to have cookies and a chat and looks frightfully smart,” she said. “I didn’t see it as someone who worked as hard as I did.”

As detailed in Christopher Petkanas’s book, Loulou & Yves, De la Falaise was by Yves Saint Laurent’s side for 30 years. They began to work together in 1972. “He was very vague about [my job],” she remembered. “He didn’t specify what I was going to do.” Her daily responsibilities show she was a multitasker of the highest order. They included everything from helping decide on the colour of a collection (“Yves has a phenomenal sense of colour, but he needs me to jerk it out of his system,” she said), to the casting of models (she encouraged the house to use Kate Moss), designing the jewellery and walking Saint Laurent’s French bulldog, Moujik. Principally, however, De la Falaise was there as a taste check, someone to try ideas on – sometimes literally – and to brainstorm with. “She is charm, poetry, excess, extravagance and elegance all in one blow,” said the designer. “We make a stewing pot. Things bubble and brew.”

De la Falaise’s style is now the stuff of legend – and Pinterest boards. Headscarves and turbans became her trademark – on her wedding day in 1977, she married Thadée Klossowski in a white turban with coral-red tassels – while her attitude to dressing could be summed up as: “Why wear one skirt/sweater/necklace if you can wear four?” As with all style icons – from Jane Birkin to Kate Moss and Rihanna – a frustratingly indefinable flair was at the heart of it. “I’ve always longed to pull off wearing a couture dress with a bit of old tat from a flea market,” says De la Falaise’s sometime associate Nicky Samuel in Petkanas’s book, “but only a few women succeed.” De la Falaise was one of them.

If De la Falaise was part-inspiration at Saint Laurent, she was also there to gee up the famously troubled designer, with her trademark light disposition. Betty Catroux, who is also described as a Saint Laurent muse, says De la Falaise “saw everything through rose-coloured glasses. She was our Prozac”.

As with many people who present as sweetness and light, De la Falaise had her own troubles. Born in the UK to the French writer Alain de la Falaise and socialite Maxime Birley, she and her brother Alexis were sent to live with a couple in rural France as children. De la Falaise’s first fashion-show experience was being taken to Paris as a child by her aunt, Gloria Swanson, and she was friends with Andy Warhol by the time she was 15. She used drugs and alcohol, and developed hepatitis in her 20s; she died three years after Saint Laurent, in 2011, at the age of 63. While she had started her own label after parting ways with Saint Laurent when he retired from the house in 2002, it is for her associations with the designer that she will be remembered – muse or not. Her importance was summed up by Paris Match after she died. The headline? “The second death of Yves Saint Laurent.”