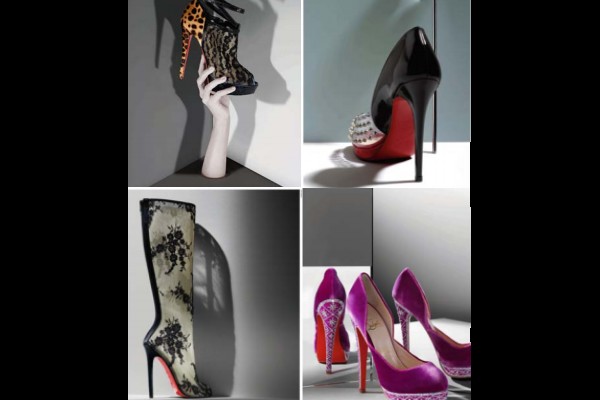 This article titled “Louboutin exhibition focuses on life and sole of shoe designer to the stars” was written by Imogen Fox, for The Guardian on Monday 30th April 2012 15.56 UTC

Twelve months ago, when curator Donna Loveday went to visit the shoe designer Christian Louboutin in his Parisian atelier to discuss the retrospective exhibition which opens on Tuesday at the Design Museum, her eye kept wandering to the trapeze bar hanging in the corner of the room. For Louboutin is not just the cobbler who has built a reputation as the purveyor of glossy red soles, the go-to shoe guy for the red carpet set, he is a designer fascinated by showgirls, fantasy and sex.

It was the designer’s inspirations and background story that the curators wanted to explore in the exhibition and so the trapeze bar was shipped to London and now hangs in a section of the show that recreates Louboutin’s charmingly disorganised workroom.

“When we started I knew that women adored his shoes,” said Loveday, “but we wanted visitors to come away with an understanding of how he designs, what inspires him, and to look at his work in progress.”

The museum expects this exhibition to have great box office appeal – not only because of the impact Louboutin has had on the fashion landscape over the 20 years since his first shop opened in Paris, but because it attempts to show the creative process of a man who Deyan Sudjic, the museum’s director, describes as “a consummate craftsman with an extraordinary eye for detail. A creative force of nature”.

The exhibition is arranged thematically and relies heavily on Louboutin’s assertion that “every woman wants to be a showgirl”. From the arched entrance, with its neon-lit “Entrée” sign, to the black swagged curtains, the red velvet sofas, the carousel display and the mirrored plinths surrounded by bare bulbs, which resemble backstage vanity desks, the cabaret look is hard to miss.

Each section explores an aspect of Louboutin’s work and career: from his teenage inspirations to his internship as an assistant at the Folies Bergère (where he sketched shoes for the dancers in his spare time) to his brief foray into garden design to his made-to-measure work with specialist artisans. One section houses shoes from his 2007 Fetish exhibition in Paris with accompanying photography by David Lynch.

It is hard to pick a highlight from this slick, theatrical show. With more than 200 pairs of shoes on display, there is more than enough sparkles, feathers, spikes, pom-poms and frills to distract the visitor.

So much, in fact, that it is the most pared-back display, entitled “Shadow Theatre” and featuring just three simple shadows of Louboutin shoe silhouettes, that has the most impact. The shadows strip away all ornamental details and show how the shape of the shoe and heel flows into the foot and ankle.

From the press conference podium Louboutin explains that one of the difficulties of the exhibition was that the shoes were necessarily seen as objects rather than being viewed worn. “When I am designing it starts from a sketch but is never complete until the moment of seeing it on someone’s foot,” he says.

He also gave some clues as to what might be missing from the exhibition. Telling an anecdote from his time at the Folies Bergère where the showgirls would put veal carpaccio into their shoes for comfort (the lack of blood in the veal makes them more effective insoles apparently) he reiterated that while he wasn’t against it in principle, he certainly didn’t want his designs to evoke comfort first. He also joked that he had “never met a woman who wanted shorter legs”. The Christian Louboutin exhibition at the Design Museum, London, runs until Monday 9 July.