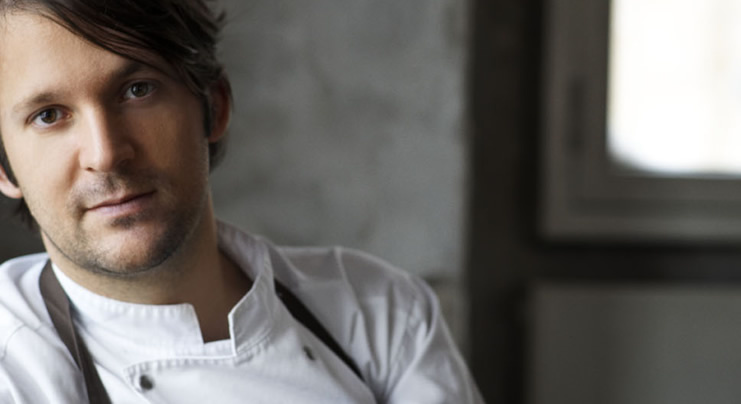 The standard bearer for the New Nordic movement, Redzepi’s meticulous attention to detail and innovative approach has enabled Noma to maintain its position at the coveted top spot of the list, which is widely considered to be the highlight of the global dining calendar. 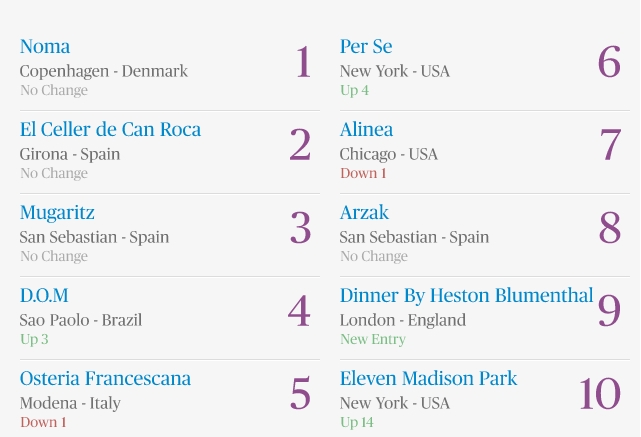 Spain can claim 5 restaurants on the list including Arzak at no. 8, whose joint Head Chef Elena Arzak was awarded the Veuve Clicquot World’s Best Female Chef award.

The Chefs’ Choice award voted for by the World’s 50 Best chefs, was presented to Andoni Luis Aduriz of Mugaritz in San Sebastian. Devastated by a fire 2 years ago, the restaurant holds its place at no.3.

The British Restaurants also has plenty to celebrate with Dinner by Heston Blumenthal in London shooting straight in at no.9 to take the Highest New Entry award, sponsored by Les Concierges, as well as establishing itself as the UK’s highest placed restaurant. Heston Blumenthal’s historically influenced British cooking has proved hugely popular with both the local and international judging panels.

Another restaurant clocking up a third consecutive win is Quay restaurant overlooking the sparkling Sydney harbour which returns home with the Best Restaurant in Australasia title and a very respectable no. 29 ranking. 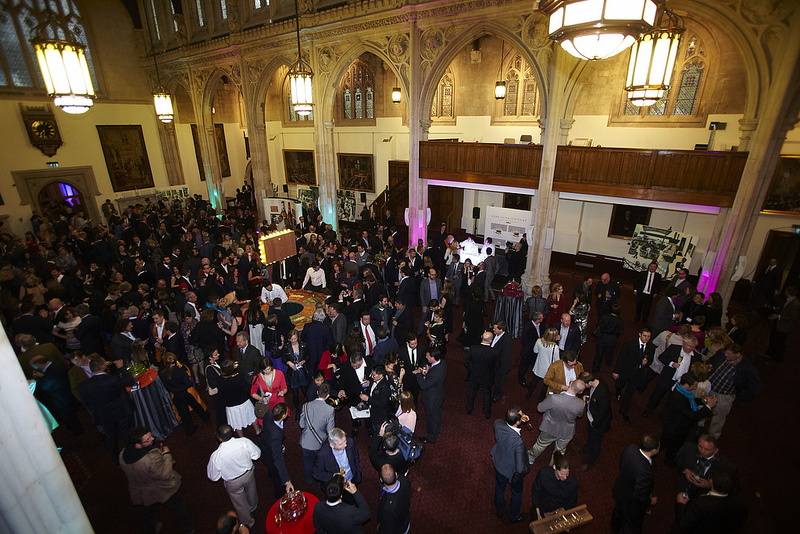 The USA boasts 8 restaurants in the list this year, the highest of which is New York based Per Se, owned by legendary chef Thomas Keller, who was rewarded with the Best Restaurant in North America and the S.Pellegrino Lifetime Achievement accolade after spending each of the past 10 years of the awards on the list under one guise or another. His original Californian restaurant, The French Laundry, which held the top spot for two years (2003-04), has also reentered the list this year at no. 43.

With 6 restaurants on the list, the Asian contingent has secured its position on the gastronomic map and the event organiser took the opportunity to announce the launch of the new Asia’s 50 Best Restaurants awards at the ceremony, which will be held in Singapore in February 2013. The awards are welcomed by top chefs from the continent including Ignatius Chan from Iggy’s in Singapore, who took the Best Restaurant in Asia title at no. 26. He said, “Asia has a long culinary history and we offer a deep, diverse and rich gastronomic landscape. Asia’s 50 Best Restaurants is a fantastic platform to educate and showcase some of the greatest Asian restaurants to the world.”
La Grenouillère in northern France received the 2012 One To Watch accolade. Chef-patron Alexandre Gauthier took the reins of the restaurant from his father back in 2003 when he was just 24. Placed at no. 81, his adventurous and ambitious cuisine now excites critics the world over. Last year’s One To Watch, Frantzén/Lindeberg, based in Stockholm, lived up to expectations and rose 37 places to join the list at no. 20.

New for this year was the inclusion of the Slow Food UK Award, sponsored by Highland Park single malt whisky. The award, which champions chefs and restaurants that support small scale producers and sustainably sourced, quality produce, was presented to Steirereck from Vienna, Austria.