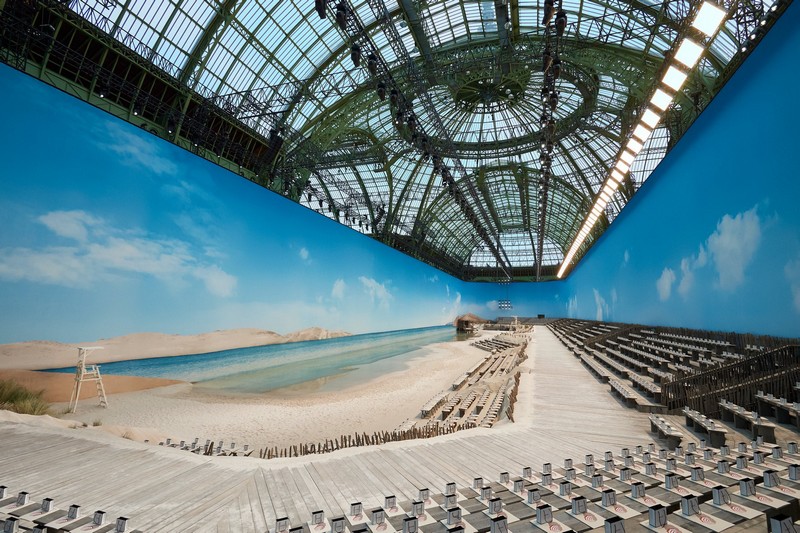 This article titled “Karl Lagerfeld makes waves with catwalk beach at Chanel show” was written by Lauren Cochrane in Paris, for The Guardian on Tuesday 2nd October 2018 15.27 UTC

It was a grey autumnal day in Paris. But at the Chanel show in the Grand Palais, Karl Lagerfeld ensured that summer stuck around for a bit longer. The designer, who previously brought a Chanel supermarket and a rocket bearing the brand’s signature double “C” logo to fashion week, doesn’t do things by half. This time, a beach was recreated that included an ocean with gentle waves, blue sky, wooden docks and lifeguards. To complete the scene, the former Baywatch actor Pamela Anderson watched the proceedings from the front row.

The sound of gulls signalled the show had started and the first model strolled through the waves, shoes in hand. The beach theme went on to include bikinis and swimsuits, sun hats, a bag shaped like a beach ball, macs for rainy days and a parasol print.

However, Chanel didn’t forgo it’s signature style: models wore colourful tweed skirt-suits and some carried several handbags at once. Then there were the iconic logos: the show featured Chanel-emblazoned swimwear, jackets, knitwear, earrings and hair slides, much of which will appeal most to the millennials who lust after vintage Chanel from the 80s.

This generation may also approve of the brand’s sustainability drive. In a post-show announcement, Chanel said the water used for the scenery would be reprocessed by the Paris sewage system and the sand recycled by the construction industry.

Coco Chanel, the brand’s founder, had a longtime love affair with the beach. She would holiday in the seaside resort of Deauville in Normandy, and the sea was a constant inspiration, with Breton tops and sailors’ jackets featuring in many of her collections. She has even been credited with making sunbathing fashionable after being photographed in the 1920s after a Mediterranean cruise.

Until this year, Chanel’s finances have been a closely guarded secret. However, in June, the brand broke with tradition and released figures revealing that revenues rose by 11% in 2017, to £7.35bn. The move has prompted speculation that the fashion house, which has been owned by the Wertheimer family through a majority stake since 1924, will be sold. But Chanel’s global chief financial officer, Philippe Blondiaux, has laughed off the rumours. He told the Financial Times in June that the company’s growth “provides us with the ammunition to remain who we are: private and independent”.