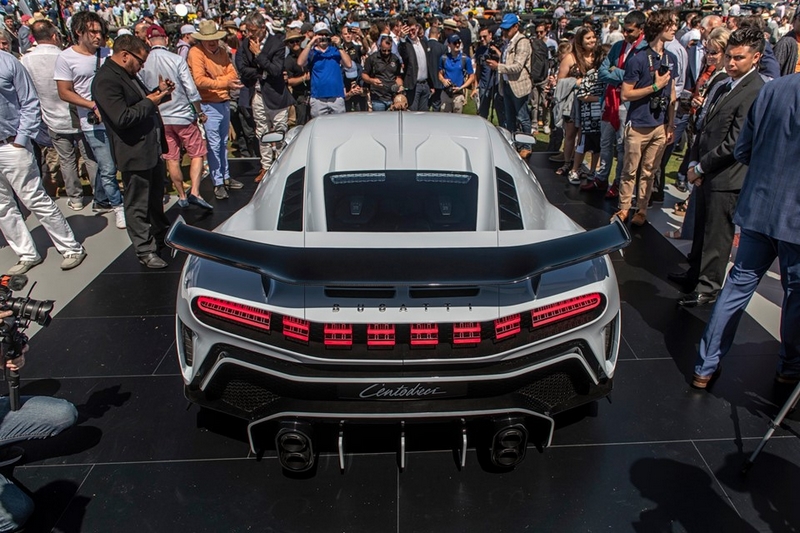 The Centodieci by Bugatti; @bugatti

Last weekend, Bugatti unveiled the Centodieci, an homage to the EB110, to the public during the Concours Week of Pebble Beach. The model is a sculpture in every detail.

The French manufacturer of hyper sports cars launched a new special-edition called Centodieci – Italian for 110. In addition, Bugatti is echoing its recent history with an exclusive and extraordinary small series.

The Centodieci, EB110, Divo and Chiron Sport – a unique display on the BUGATTI stand at 2019 Pebble Beach Concours d’Elegance; @bugatti

Even sportier and more extreme than the Bugatti Chiron and Divo hyper sports cars, yet elegant and timeless like the La Voiture Noire, Centodieci is a one-of-a-kind Bugatti for the enthusiast.

“With the Centodieci, we pay homage to the EB110 super sports car which was built in the 1990s and is very much a part of our tradition-steeped history,” says Stephan Winkelmann, President of Bugatti. “With the EB110, Bugatti catapulted itself to the top of the automotive world once again after 1956 with a new model.” It was a crucial interim step for the production facility that was newly founded in Molsheim in 1998, taking Bugatti back to its roots in France, and the first hyper sports car of modern times – the Veyron.

“We faced a number of technical challenges in terms of the development and design of the Centodieci,” says Achim Anscheidt. The EB110 is a very flat, wedge-shaped and graphically quasi two-dimensional super sports car of the late 1980s. “Transporting this classic look into the new millennium without copying it was technically complex, to say the least. We had to create a new way of combining the complex aerothermal requirements of the underlying Chiron technology with a completely different aesthetic appearance. 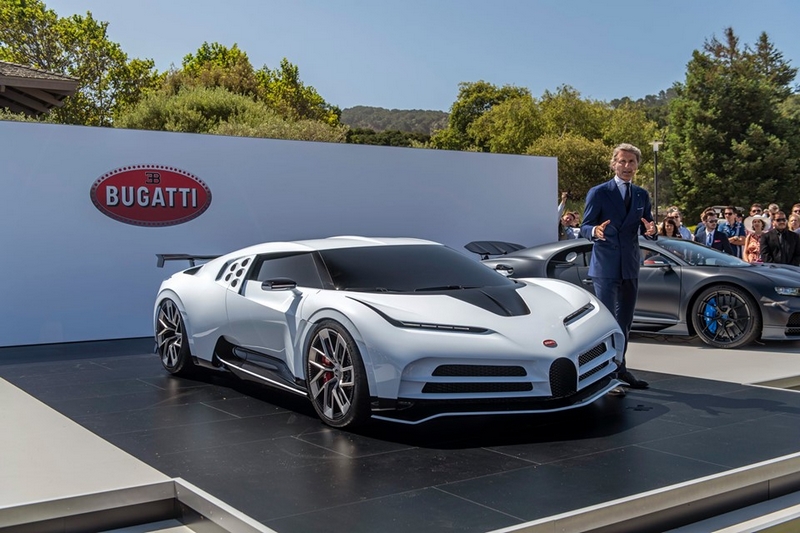 The Centodieci by Bugatti; The unveiling; @bugatti

The front of the Centodieci supercar drops very low.

The iconic Bugatti horseshoe has been reduced accordingly, while the Bugatti logo Macaron sits on the hood, which is interrupted at the centre by a black element. “This allowed us to rekindle memories of EB110,” says Achim Anscheidt. The optimised front section with the extended front splitter and the airflow through the hood further improve the car’s aerodynamics. 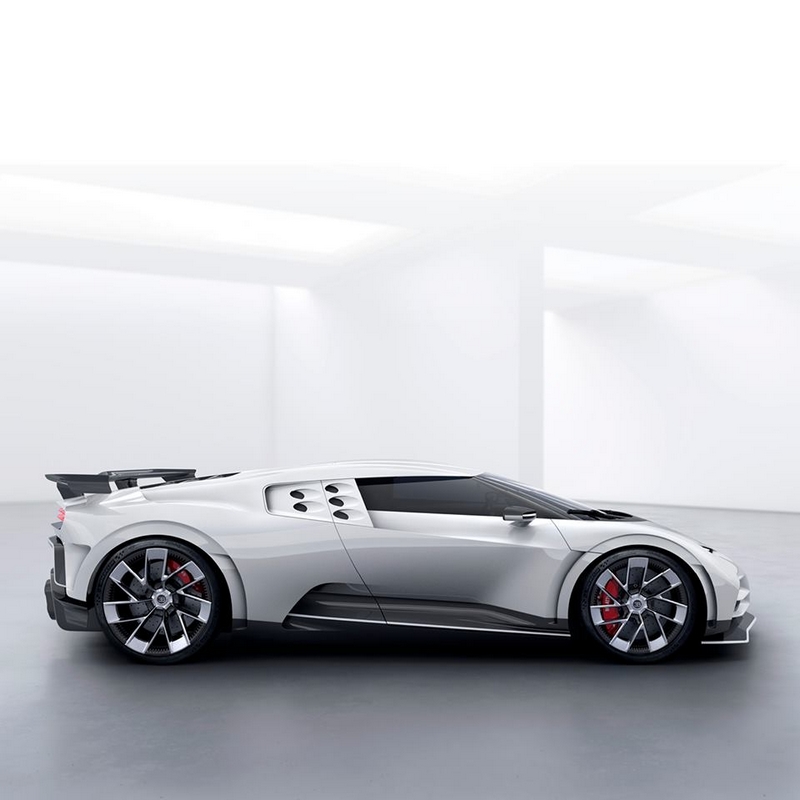 The Centodieci by Bugatti; @bugatti

Instead of the V12, Bugatti Centodieci supercar features the iconic 8.0-litre W16 engine with 1,176 kW/1,600 hp at 7,000 rpm. An additional air inlet in the area of the oil cooler reliably regulates the temperature of the performance-enhanced engine. The Centodieci sprints from 0 to 100 km/h in 2.4 seconds, to 200 km/h in 6.1 seconds and to 300 km/h in 13.1 seconds; the top speed is electronically cut off at 380 km/h. “It’s not just the top speed that makes a hyper sports car. With the Centodieci, we once again demonstrate that design, quality and performance are just as important,” says Stephan Winkelmann. Compared to the Chiron2, the Centodieci saves 20 kilograms of unladen weight. Among other things, a lightweight windscreen wiper and stabilisers made of carbon are used.

Customers can have their special-edition Centodieci painted in the Bugatti colour of their choice. The small series, limited to ten vehicles (and already sold out) and handcrafted in Molsheim, France, will be delivered in two years at unit prices starting at EUR 8 million plus VAT. After its short period in Italy, Bugatti has now been back at its old headquarters in Molsheim, France, for almost 20 years. This is where Ettore Bugatti produced the very first vehicles that bore his name at the end of 1909.

As in the EB110, the engine is seen behind a transparent glass surface. The rear is formed into a single ventilation hole, characterised by the eight rear light elements, 2+2 exhaust tailpipes positioned on top of each other in a black matt anodised finish and a performance diffuser to improve downforce. The overhanging rear wing is permanently attached in the style of the original EB110 SS. This increases downforce. Downforce is supported by the aerodynamic tailgate and a laminar flow-optimised rear window. 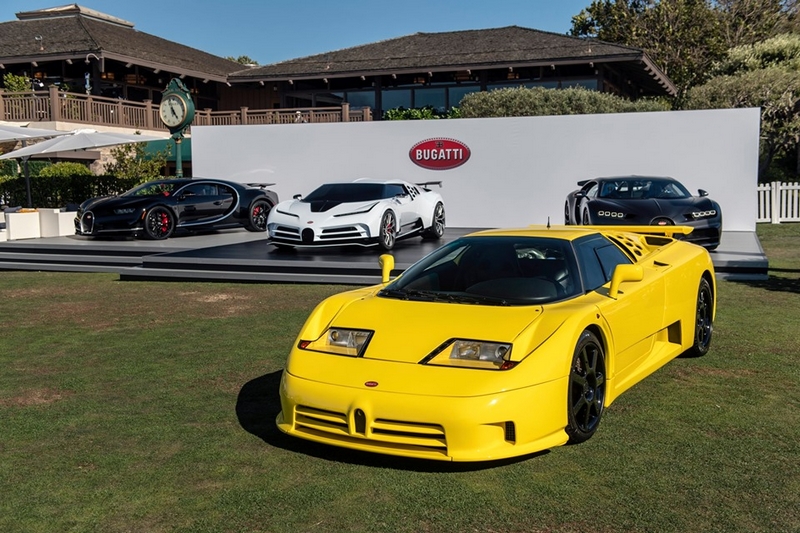 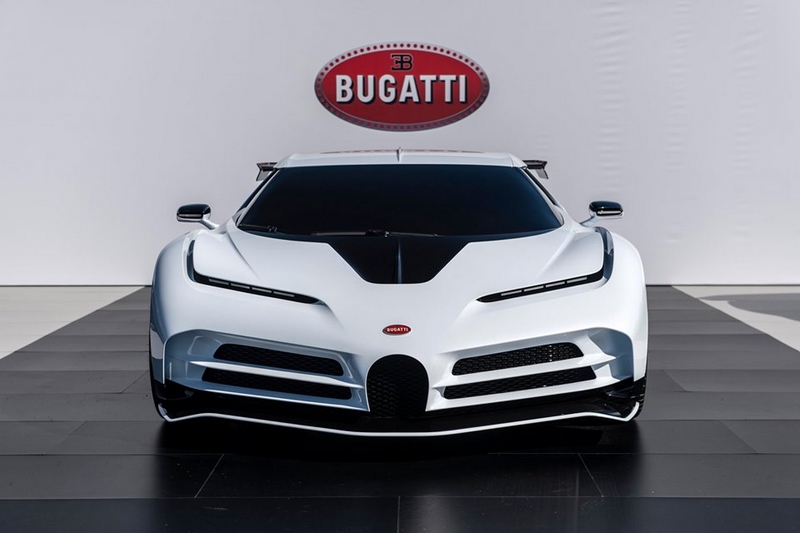 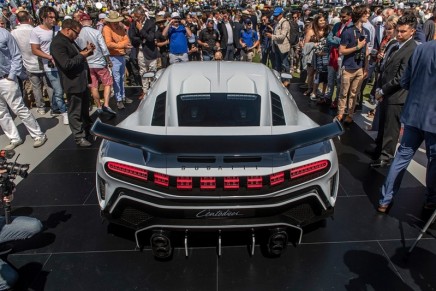 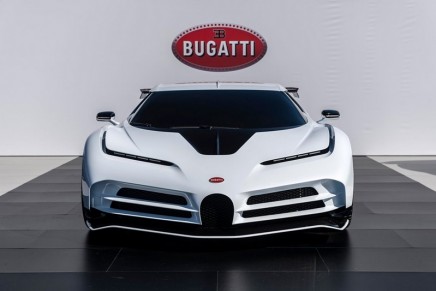 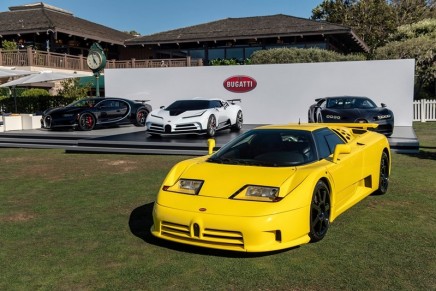 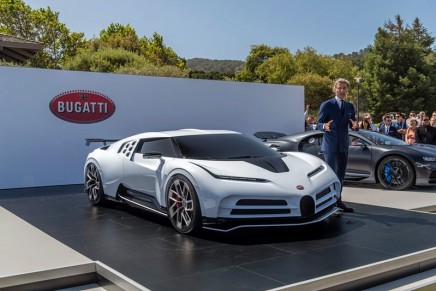 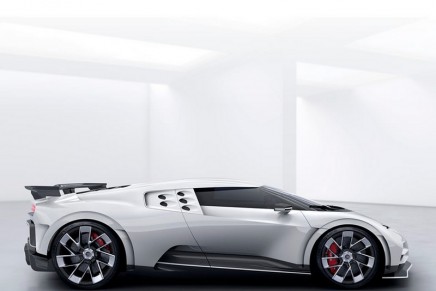