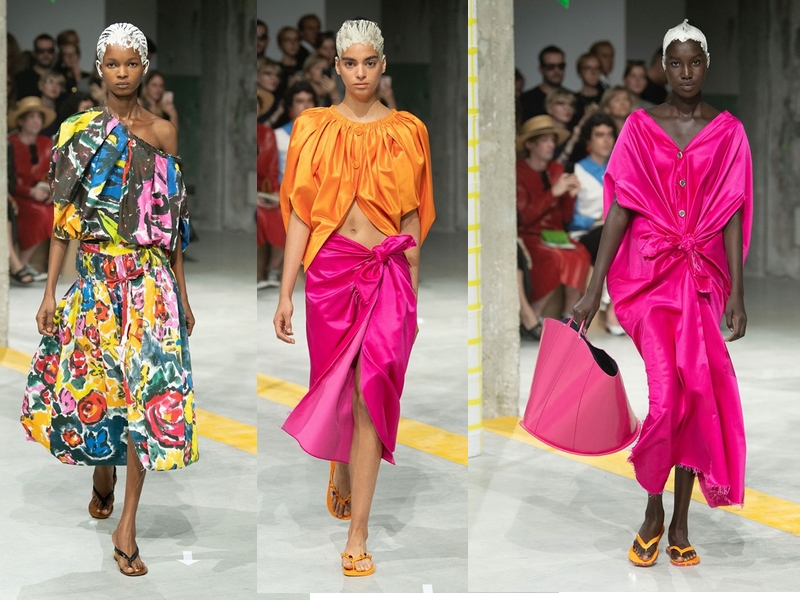 The timing of Milan fashion week coinciding as it does with the Global Climate Strike, is a challenge for an industry that is seen as one of the main culprits in the climate crisis. On the one hand, it puts brands who continue with business as usual into the shade, while on the other it highlights eco-conscious designers.

Marni fell into the latter category on Friday at its spring/summer 2020 show. Creative director Francesco Risso said after the show that he would not join the hundreds of thousands of people protesting around the world, but that he was striking in his own way.

Related: High-octane glitz for Versace as J-Lo brings the house down

His show proved to be a vehicle for the second part of a collaborative art project that started with his menswear show in June, in which guests sat under a suspended ceiling of plastic bottles that his team had collected. For Friday’s show, the same bottles had been recycled into a set of palm tree leaves by the artist Judith Hopf, with cardboard trunks repurposed from mechanical pulp and old clothing. They were, he said, “pieces we will keep and treasure – they aren’t pieces we are going to waste. I hope they are going to have their own life.”

He extended the repurposing idea to the collection itself. Fabric that appeared on prom dresses looked like taffeta but was actually made from recycled plastic bottles. Other outfits comprised fabric from the archives that the brand will remake in limited editions to be sold.

Risso said he was in Brazil when the Amazon rainforest fires started last month, an experience which left him “crying for weeks” and inspiring an energy in him that reminded him of the protest songs of Brazilian musicians Gilberto Gil and Caetano Veloso. “They were so joyous and political and it’s the lure of nature that for us it’s the only possibility to connect with our own tribes.”

It accounted for the Fauve-like brushstrokes that resembled the colour palette of a thriving jungle and appeared hand-painted on everything from those dresses to large oversized leather jackets. What the collection had in credentials it somewhat lacked in accessible takeaways. Marni is usually a brand that can be relied upon to deliver tension between eccentricity and everyday clothes, whereas this collection did not balance the scale.

Many will see it as problematic for a fashion house to be presenting another new collection of clothes while simultaneously despairing at the state of the environment, but credit should still be given to a brand addressing the issue when so many are not.

Risso said: “I don’t like to proclaim myself as doing something sustainable because it’s easy to promote that word and not really be sustainable, but we are starting – this is our joyous process.”