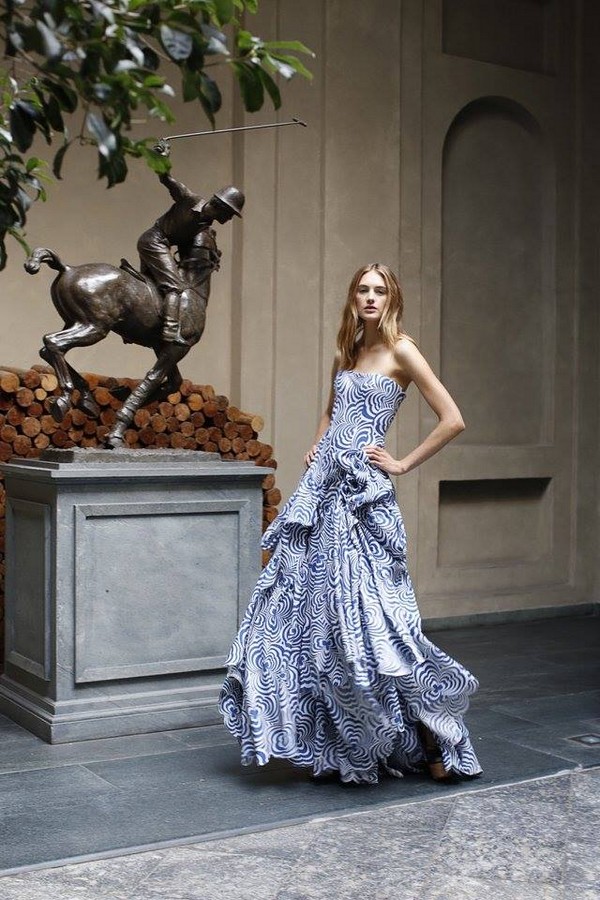 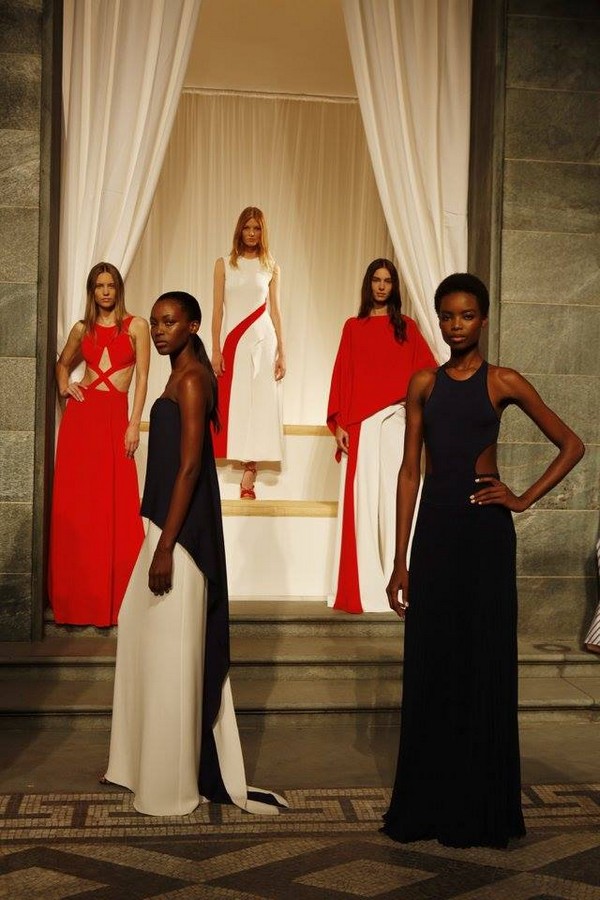 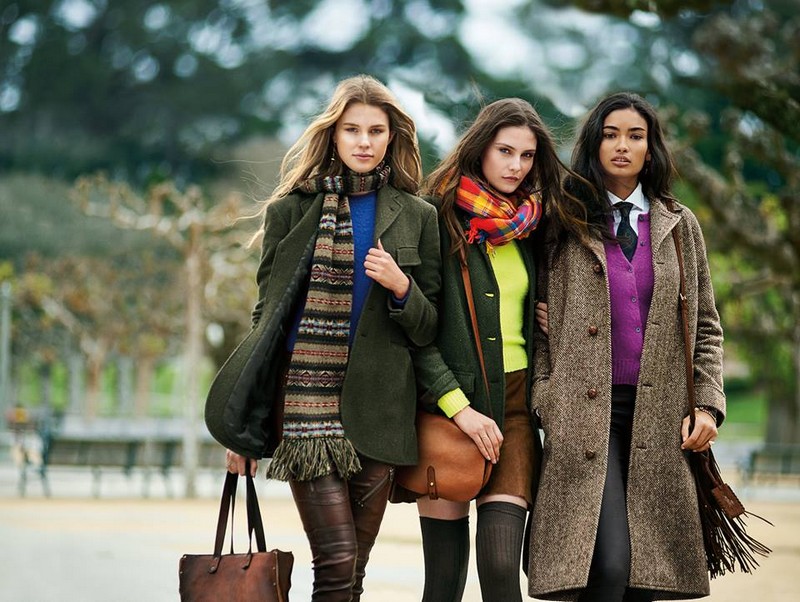 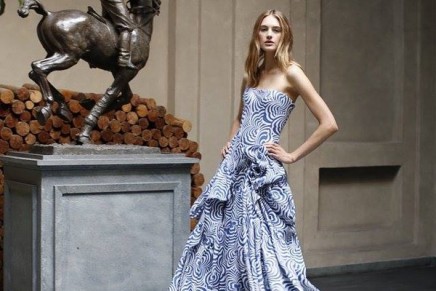 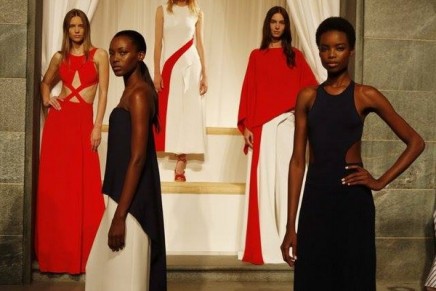 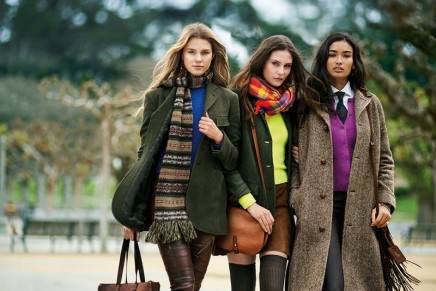 This article titled “‘It’s not about fabric, it’s about dreams’: how Ralph Lauren created an empire” was written by Emine Saner, for The Guardian on Friday 2nd October 2015 14.14 UTC

The story of how a second-generation immigrant tie salesman from the Bronx became a multibillionaire fashion designer is the embodiment of the American Dream.

This week, Ralph Lauren – who spent 48 years building his tie business into a global fashion brand – has announced he is stepping down as chief executive of a company that brought the world the idea that a designer who dressed Oscar winners would also craft bedlinen and bath towels, and a style of American sportswear that continues to influence fashion.

His brand, and everything associated with it – the advertising, the stores – emerged in the 1970s and 80s, but it feels as classic as a leather club chair. Lauren’s Americana sweeps from the wild west to the English-influenced country club, from cowboy boots to preppy shirts.

The marketing genius is that his brand conjures romantic, nostalgic visions of prairie women and rugged wranglers, and clean, Ivy League privilege, yet Lauren made his billions from expensive polo shirts and denim. Last year, his company had sales of $7.6bn (£5bn) and he now occupies the newly created post of chief creative officer after announcing he was stepping down as CEO on Tuesday.

“He’s of the first generation [of designers] to make themselves household names,” says the fashion writer and editor Harriet Quick. “He’s in the same generation as Giorgio Armani, Calvin Klein. They are moguls, godheads of the contemporary fashion industry.”

Lauren was born Ralph Lifshitz in 1939, to Jewish immigrant parents who had escaped Belarus for the US. His father was an artist but made a living as a painter and decorator. Even as a child, Lauren, the third of four children, had a fascination with clothes and their ability to transform people: he emulated the preppy look of New York’s rich kids and would later riffle through thrift shops for authentically distressed denim, cowboy boots and leather jackets. He was obsessed with the glamour of Hollywood stars such as Cary Grant, Steve McQueen, Fred Astaire and Katharine Hepburn.

Related: Ralph Lauren steps down as CEO, with Old Navy president to succeed him

When he was 16, he and his brother Jerry changed their name to Lauren – though not necessarily to erase their ethnicity and pass as the kind of W asp the future designer would so adore. Had his surname not sounded so unfortunate, Lauren said once, “I never would have changed it.” He also said he sometimes regretted the change because it has made people question his integrity. “Because I believe in authenticity, it seems inauthentic to have changed your name,” the designer said. “And I don’t like it to be an issue, so when people write about it, it tilts what I’m truly about.”

But, more than anyone, Lauren has sold fantasy, not authenticity. His is a world of antique hunting rifles, glossy-flanked horses, wood-panelled rooms and ludicrously good-looking people. “The world of Ralph Lauren was a version of pastoral,” writes Jonathan Raban in his travelogue of America.

In Lauren’s world there are no peasants, faulty plumbing, bad teeth or damp mansions. Raban’s theory was that Lauren had fallen for a world of Englishness from film and television – Brideshead Revisited particularly – which seems true, because in an interview last year, he said watching Downton Abbey was “one of my great pleasures”. “With besotted unrealism,” writes Raban, “Lauren idolised the countryside, the past and a class system that America had never experienced at first hand.”

He could be described as a highly successful fantasist who turns his dreams into reality. If he pictures himself as a cowboy, all he has to do is learn to ride on a Colorado ranch. He wants the perfect family life? Advertising campaigns have immortalised his photogenic family, and his marriage to wife, Ricky, has lasted more than 50 years surviving reports of an affair with a longterm Ralph Lauren model in the 90s. Lord of the manor? He was once thinking about buying a stately home in England, but instead moved to a 250-acre estate an hour north of Manhattan and is said to have blasted part of the landscape away with dynamite until it resembled the gentle hills of the English countryside.

Michael Gross, the New York-based writer who has interviewed Lauren several times and wrote a biography of him, says the thing he found most interesting about the diminutive, softly spoken designer is his willpower. “He is like a Steve Jobs character,” says Gross. “He can literally shape reality to his own will. Ralph has the ability to create worlds and make people believe in them.”

Lauren’s son, David, a vice-president of the company, has said the company is “not about fabric, it’s about dreams” – and his father’s unique design process seems to reflect his idea that your clothes should tell a story. Lauren, who never formally trained and does not sit down to sketch a collection.

“It was inspiring to get inside his head in that way,” says the designer Lyn Devon, who worked with Lauren for two years before setting up her own label. “You would create these rooms called rigs and you would put everything up on the wall, whether it was an image, a shoe, doll, sketch, a swatch of fabric, it all just creates a jewel box of inspiration for a collection. Everyone from the design team goes and throws whatever they find inspiring and he would come and pick a room that he wanted us to go with. He would listen quietly, but then he would be very opinionated. He was very passionate.”

Maggie Norris, who worked with Lauren for 13 years before setting up her couture label, says: “He would come up with a concept. As an example [he would say he was interested in] Russia. We would research the tsars, the different military uniforms, the jewellery of the time. It was really wonderful.” The rig would then be filled with photos, sketches, objects, she adds. “He would walk into the room and say, ‘I like this and that.’ It was a team effort, but definitely he was the headmaster.”

In the early 60s, Lauren worked for the Manhattan men’s outfitter Brooks Brothers behind the tie counter. He wanted to design ties that were bigger, better, glitzier, but the company was not interested so he set up on his own under the name Polo in 1967. It snowballed from there: he started designing shirts then suits. “In those days, a shirt company made shirts, a tie company made ties, a suit company made suits,” Lauren said in an interview last year. “But I made them all. That was a radical thing.”

He made a name for himself as a menswear designer before creating his first women’s collection in 1971, which referenced the men’s line with its tailoring and separates. His influence grew: he dressed Diane Keaton in the film Annie Hall, which remains a landmark look. And his wardrobe for Robert Redford’s Jay Gatsby – a character Lauren himself must surely have recognised – in the 1974 film version of The Great Gatsby helped win an Oscar for costume design.

He gave men permission to wear jeans with dinner jackets. He was one of the first big designers to expand his brand into homewares and the immersive experience of his shops – notably Rhinelander, his store in a Madison Avenue mansion – is something that revolutionised retail.

The fashion world has not always “got” Lauren, sometimes dismissing him as derivative and a product-seller. But Quick says: “I don’t think the proposition has ever been to be a fashion-forward brand. It’s been to produce a certain level of glamour and elegance.”

“His importance is immense in America and around the world as well,” says the fashion writer, historian and Lauren biographer Colin McDowell. Although his prices have always been high (his Polo shirts, for instance, cost £70) and beyond the reach of most, his brand is aspirational but not intimidating. With his approach to retail, says McDowell, “he made people who were poor and not necessarily socially secure feel they could walk in there and have a look at things and be part of the miracle, because it was a miracle. He changed American attitudes – there are those who say he made Americans almost as snobby as the British or Europeans.” McDowell says he does not know if he agrees, “but certainly he has been an immense force”.

McDowell spent a lot of time with Lauren when writing his book and says: “He was lovely, always charming. There are some nasty people in the fashion world, particularly designers who think they’re gods. He never, ever, thinks he’s a god – he’s a working man.”

Can the brand continue without him? “Sure,” says Gross. “There is a very clear stylistic vision and, properly managed, I don’t see any reason why it couldn’t.” However, it does not look as if Lauren is ready to step away just yet. The day his appointment of a new CEO emerged, he sent a memo to staff to dispel the idea that stepping down meant stepping back – he will still be in charge. “Ralph asserted his control again in that memo,” Gross says with a laugh. “How very Ralph.”

Career: After a spell in the US army, Lauren worked for the men’s outfitter Brooks Brothers as a tie salesman. He launched his own range of ties in 1967, followed by shirts and suits. In 1971, he launched a womenswear range. In 1981, Lauren opened a store in London and took the company public in 1997. His empire would grow to include a number of differently priced fashion brands, homeware, childrenswear and perfume. Lauren designs the US Olympic team uniforms and has designed the outfits worn by Wimbledon officials for the last 10 years.

High points: The pale pink gown Gwyneth Paltrow wore to collect her Oscar in 1999. In 2010, Lauren was awarded France’s Legion d’honneur. In 1992, his heroine Audrey Hepburn presented him with the Council of Fashion Designers of America’s lifetime achievement award.

Low point: The company paid $1.6m (£1m) to settle a case after discovering a subsidiary had been bribing customs officials in Argentina.

They say: “Ralph Lauren sells much more than fashion. He sells the life you’d like to lead. To own a creation of Ralph Lauren’s is to savour a taste of the American dream. He has elevated what Americans see as possible for ourselves by offering a snapshot of a storybook lifestyle that somehow feels attainable.” Oprah Winfrey