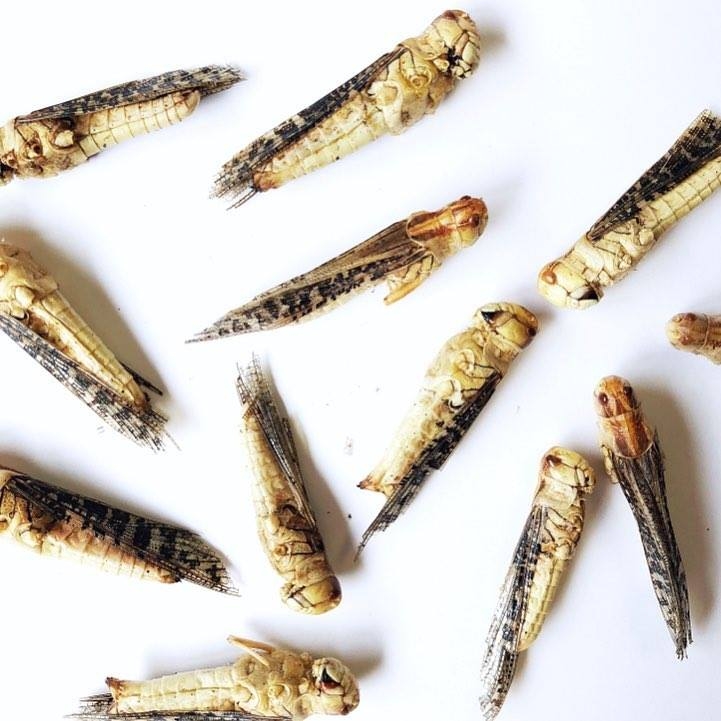 This article titled “Insects tipped to rival sushi as fashionable food of the future” was written by Zoe Wood, for The Guardian on Tuesday 25th June 2019 17.32 UTC

Cricket crisps and buffalo worm burgers could be as fashionable as sushi within a decade due to falling prices and a waning “yuck factor”, which analysts believe could push the bug protein market to a value of £6bn by 2030.

A report has shone a spotlight on a market enjoying bumper growth, with sales increasing by about 25% a year as high-protein, low-calorie bug-based snacks and staples shake off their association with I’m a Celebrity-style bushtucker trials.

“We see scope for insects to reduce the environmental burden of our food system,” said Emily Morrison, one of the authors of the report by Barclays. “Although there are numerous hurdles to overcome – notably regulation, price and cultural acceptance – we see insects as a viable middle ground for consumers wanting to make their diets more sustainable.”

Manufacturers, supermarkets and restaurants are all scrambling to cash in on a changing food landscape as a growing number of consumers embrace flexitarian diets – in which a largely vegetable-based diet is supplemented occasionally with meat – and experiment with meat alternatives and plant-based eating.

The damaging environmental impact of global meat production has spurred interest in bugs as an alternative, sustainable food source. Unlike cows or pigs, insects can be bred in significant numbers without taking up large amounts of land, water or feed.

The report estimates the global insect market – for consumption by humans and farm animals – will grow at 24.4% a year over the next decade, putting sales on track to hit $8bn (£6.3bn) by 2030. Over that time it expects the commercial production of edible insects to increase by about 28% a year, from less than 50,000 tonnes today to more than 730,000 tonnes in 2030.

According to the UN Food and Agriculture Organization, at least 2 billion people, particularly in Asian countries such as Thailand and Vietnam, already regularly consume insects, which are seen as a way of helping to feed the world’s growing population.

The Barclays report cites sushi as an example of a food that was once considered a novelty in the west but has gained mainstream acceptance after trickling down from high-end restaurants to supermarket shelves. Members of Generation Z, with their heightened focus on health and sustainability matters, are the “most likely to overcome the ‘yuck factor’ associated with consuming insects”, it adds.

The big supermarkets are already testing consumers’ appetite with bug-based snacks and staples such as pasta, flour and cereal. The European supermarket group Carrefour entered the fray last year with a range that included buffalo worm pasta and granola in its Spanish stores, while Sainsbury’s and Ocado sell bags of roasted crickets made by the London food company Eat Grub.

Eat Grub’s co-founder Shami Radia said the five-year-old business, which also sells insect-based energy bars and protein powders, had just secured its biggest order to date, with the German discounter Lidl, which will stock its roasted crickets in 3,200 of its domestic stores.

“We thought our protein bars would be the most popular but our crickets have been a surprise as Sainsbury’s has helped make them more mainstream,” said Radia, who believes attitudes to eating insects have started to change. “Press coverage used to describe insects within the context of bushtucker trials but now they are talked about as the food of the future. A lot of our customers are meat eaters who want to cut down on their meat consumption but don’t want to be vegetarian or vegan.”

He said that while crickets had a growing following, turning shoppers on to the charms of buffalo worms – a “fantastic addition” to a smoothie or a flapjack, according to the Eat Grub website – and mealworms (great for roasting and sprinkling on soups) was more difficult because of the word “worm”.

But it is not just squeamishness that is putting some consumers off, with analysts pointing to prices that are out of kilter with comparable snacks. This has started to change as the market grows in scale and yields improve. Ÿnsect, a French mealworm producer, is planning to build the world’s largest insect farm in Amiens, northern France.

Morrison said: “The prices for different products do vary, but generally prices remain relatively high. The ability to automate the insect-farming process will enable supply to increase and prices to become more competitive with meat and plant-based alternatives.”