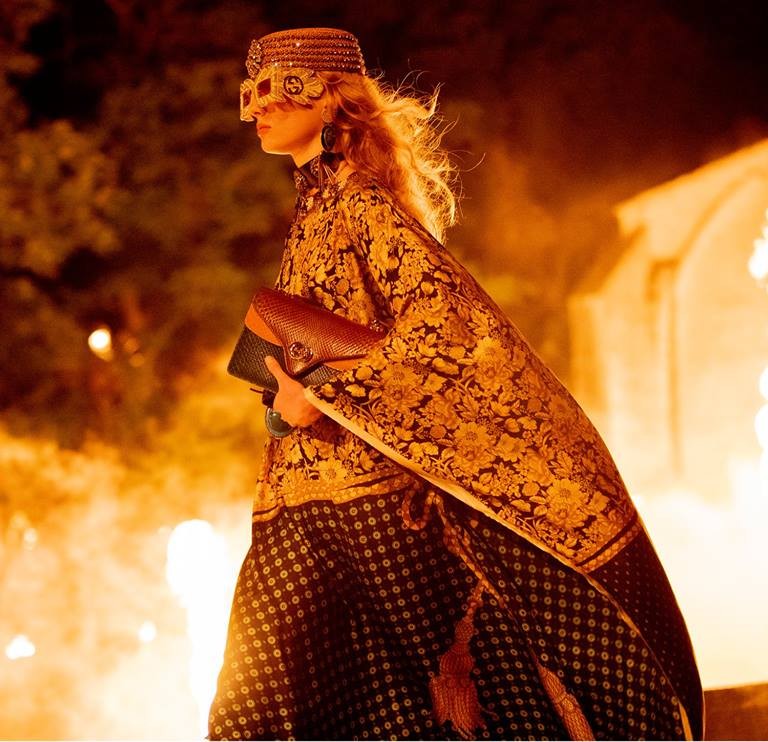 This article titled “Gucci dances with death in high-glamour horror show” was written by Hannah Marriott in Arles, for The Guardian on Thursday 31st May 2018 14.12 UTC

Historically, the theory of “memento mori”, intended to remind people of the inevitability of death, has had little to do with selling designer trousers. But when the Latin phrase appeared at Gucci’s cruise show, crudely stitched down the legs of a pair of slacks, it had a strange kind of resonance.

The show was held among the crumbling tombs and stone caskets of the spectacularly spooky Alyscamps Roman necropolis, near Arles in Provence. Dry ice swirled and candles flickered in gothic candelabras, creating a scene in which Hammer horror met 1980s soft rock. The atmosphere was turned up to 11 when a long line of flames licked down the centre of the venue. Then the models stepped out of the fire and mist like a particularly well-dressed, undead army.

All the elements that have recently made Gucci such a staggering commercial success were in evidence. The clothes were inspired by a variety of eras, from Renaissance-style cloaks to 1970s-esque men’s high-heeled boots. There was a lot of weirdness: headdresses that combined bishop’s hat with beekeeper’s mask; tights stretched ghoulishly over a model’s face. There were straight-up covetable pieces, too, such as Mary Janes with sparkly GG-logoed block heels. A clever new collaboration with Chateau Marmont was presented, with the logo of the LA hotel with a history of dark glamour presented on “laundry” bags and sweatshirts alongside the silhouette of a devil.

At the end of the show, Gucci’s long-haired creative director, Alessandro Michele, appeared out of the flames, like a fashion apparition, to receive a standing ovation. The rapturous applause might not even have been the highlight of his night. Half an hour later, on a small stage in the grounds of the necropolis, Elton John – whose glam-rock aesthetic has made him a significant Gucci muse since Michele took over the house in 2015 – gave a surprise, virtuoso performance. Michele introduced the singer as someone who has become one of his greatest friends. The designer watched, enraptured, from the stage as John played Rocket Man and Your Song to a stunned crowd, the lights bouncing off his huge, glittery Gucci sunglasses.

The show was the culmination of cruise season, a relatively new fixture in the fashion calendar, in which mega-brands fly journalists and digital influencers to see their clothes in stupendous locations. Originally, “cruise” collections – also known as “resort” – were conceived to provide warm-weather clothing to rich customers travelling during the winter. In recent years, the shows have become a fashion arms race of jaw-dropping sets and attention-grabbing ideas. Even by those standards, Gucci’s decision to veer so far thematically, from the pleasures of travel to meditations on death, took some gumption.

The John coup was perhaps the ultimate in one-upmanship. It also illustrated the benefits of staging such spectacular events in the age of Instagram. Many attendees watched the gig entirely through their smartphone screens, while posting live streams and videos to their international followers. Anyone who wasn’t there but follows a lot of fashion Instagram accounts will have been caught in the grip of a very modern phenomenon, one that can be profitable when harnessed by brands. This phenomenon is not unrelated to mortality, and to concerns about failing to do all one would wish in one’s short life. It is known as fear of missing out or, as the social media acronym would have it, FOMO.