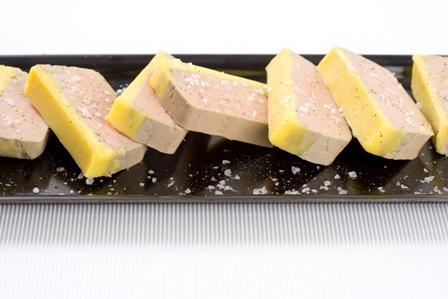 The days of foie gras are numbered…Foie gras, the goose liver pâté typically achieved through gavage (force-feeding corn), will be forbidden 1st of July in California, as many animal associations reported against it and a new law will be activated.

Gavage-based foie gras production is controversial due to the force feeding procedure used. A number of countries and other jurisdictions have laws against force feeding or the sale of foie gras. Force-feeding ducks has already been outlawed in the U.K., Austria, Germany, the Czech Republic, Finland, Italy, Luxembourg, the Netherlands, Norway, Poland, South Africa, Sweden, Switzerland, Denmark, and Israel.

In 2004, the state of California passed Senate Bill 1520, forbidding the “inhumane” practice of force-feeding ducks and geese, along with the sale of foie gras in the state. The legislation’s goal was to give foie gras producers time to develop a more humane way to create the product. The ban is slated to go into effect on July 1, and a group of 100 California chefs has banded together to oppose it. Animal rights groups say the industry should have used the time to develop a better way to make foie gras.

Animal rights and welfare groups such as PETA and the Humane Society of the United States contend that foie gras production methods, and force feeding in particular, constitute cruel and inhumane treatment of animals. Specific complaints include livers swollen to many times their normal size, impaired liver function, expansion of the abdomen making it difficult for birds to breathe, death if the force feeding is continued, and scarring of the esophagus.

The Coalition for Humane and Ethical Farming Standards, an organization of California chefs, culinary professionals and
supporters of sustainable and humane farming standards, oppose the ban on foie gras, but support a broader standard for
ethical treatment of animals and humane farming practices.

“The total ban on foie gras, effective on July 1, goes too far. If we ban foie gras, animals will be the victims of a newly-created black market. But if we regulate the industry instead, we can use the power of the California economy to reform farming practices around the world,” said the group of California’s well-known chefs that have joined a petition to keep foie gras on California menus by proposing new and humane rules for the birds.

Farmers as far back as Greek and Roman times began to deliberately overfeed geese.

Hudson Valley Foie Gras in Ferndale, N.Y., is one of the USA’s few foie gras producers. “We let hundreds of people on our farm to see the process,” operations manager Marcus Henley told usatoday. The company has posted YouTube videos in the belief that if the public sees the actual process, people will understand that it’s not damaging to the birds.Foie foes are naive, Scherotter says. “It attracts the kind of loony-left animal rights activists who are urban and suburban white people who are unaware of how food is produced, so when they actually see it they’re grossed out by it. Rural people don’t have these issues.”

The new prohibition law in California will hit in foie gras fans and diehard gourmands of this luxury product. Goose liver will certainly will enter the black market.