For the Men’s Spring/Summer 2020 Collection, Silvia Venturini Fendi collaborates with film Director Luca Guadagnino to bring the Fendi Man “en plein air”, out of the virtual space and the overwhelming immateriality that is so pervasive in life today. 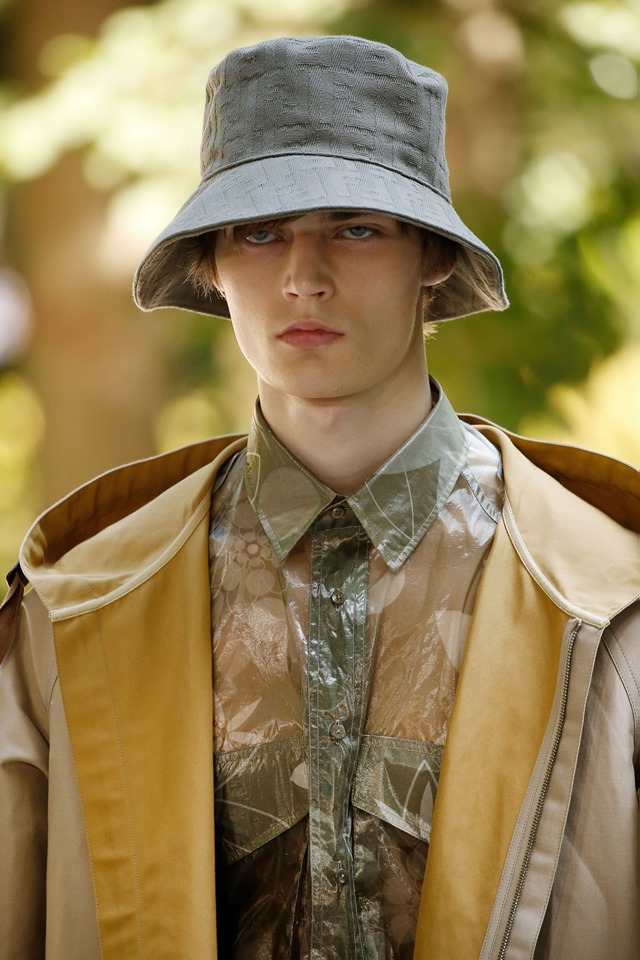 Under the sun in the garden, a straw hat and a Pequin wool picnic blanket are mandatory; Fendi Men Spring Summer 2020; @fendi 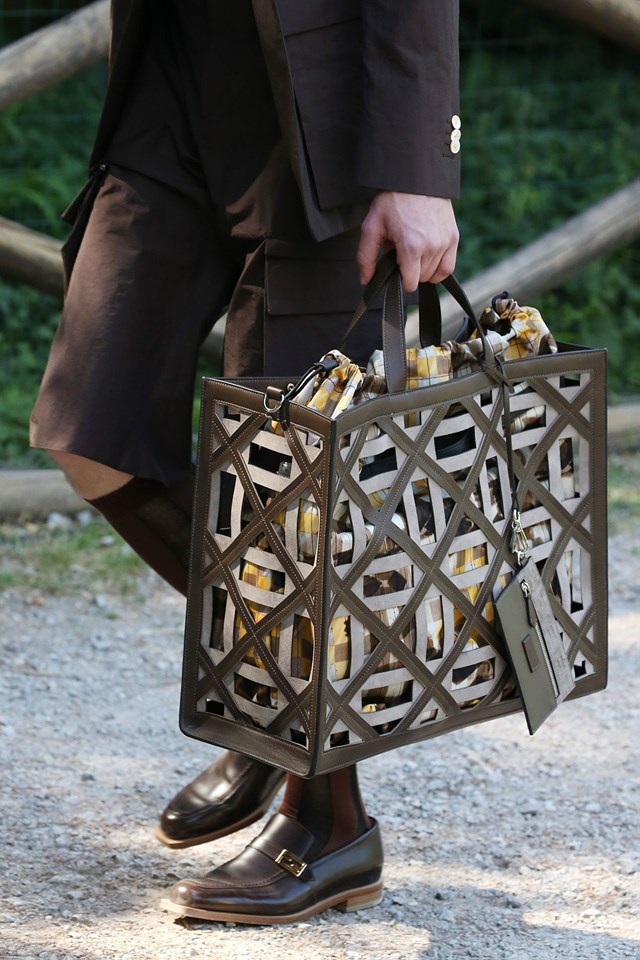 This article titled “Fendi celebrates Italian summers with help of Luca Guadagnino” was written by Scarlett Conlon in Milan, for theguardian.com on Monday 17th June 2019 18.06 UTC

Two Italian greats came together on Monday morning in Milan as the fashion house Fendi unveiled the Oscar-winning director Luca Guadagnino as the guest artist for its spring/summer 2020 men’s collection.

Seating guests on wicker chairs in the garden of Fendi’s headquarters, which lined the meandering gravelled catwalk, Fendi effectively invited the audience on to one of Guadagnino’s sets for the show. It evoked the spellbinding summers he depicted in 2009’s I Am Love and 2017’s box-office hit Call Me By Your Name – both set in and not too far from Milan, and which are on the unofficial fashion curriculum. A heatwave and the music – which featured excerpts of piano by the Japanese composer Ryuichi Sakamoto, who worked on the soundtrack of Call Me By Your Name – only helped.

Guadagnino has reinterpreted the concept of La Dolce Vita for a 21st-century audience through his achingly beautiful films. He is the undisputed modern master of painting Italy in its most beguiling light. A long-term friend of Fendi’s creative director, Silvia Venturini Fendi, his collaboration with the fashion house brought with it the ardent desire cinemagoers are usually left with after watching one of his films.

Bucking the brand’s habit of showing in a dark inside venue, Fendi was keen that the collection was presented “en plein air [outdoors] … drawing upon the idea of the garden as a symbol of man’s most sophisticated relationship with nature”, read the show notes.

Such sophistication was enhanced by the painterly floral prints that splayed out on to relaxed tailoring and shirts in silk and organza, layered as if to resemble the distant blur of sun-dappled blooms in a Lombardy garden. These originated from sketches Guadagnino made during “moments of ideleness” on the set of his latest film, Suspiria, on which Fendi served as associate producer. So too, in the super-fine knitwear that came waffled and in open weave – a lattice effect akin to a garden trellis. Fabrics, such as hessian and raffia, contributed to the back-to-nature ambience.

Statements came via twill boilersuits, wax jackets – long and short with plenty of practical pockets for tools – and excellent true-blue denim, while accessories worked with the horticultural theme. Gardening gloves with the house’s logo printed on the ribbed cuffs just needed a pair of secateurs to be complete; bucket hats came with sun shields. Elsewhere, plaid picnic baskets and a leather-bound watering can enhanced the setting. Fendi is a house for whom much-hyped product has been commercially successful in recent years and a foray into more elegant territory has not left fans of this aesthetic wanting.

The setting and aesthetic heralded something of a new era for the house – a sentiment particularly poignant given that this was the first menswear show since the death of its long-term creative director Karl Lagerfeld, who died in February. While most famous for his tenure at Chanel, Lagerfeld helmed the Milan-based house for 54 years.

Guadagnino has close ties with the fashion industry, frequently working with high-profile designers. For A Bigger Splash, made in 2015, the former Dior and Calvin Klein designer Raf Simons created the wardrobe worn by Tilda Swinton’s character, while this year Guadagnino worked with Giorgio Armani to create a foundation to support budding filmmakers.

Armani bookended the day with his show on Monday evening, bringing Milan fashion week to a close. Like the overriding themes of Guadignino’s films, he also focused on summer as a “liberating season”.

This translated to a relaxed take on everything on the catwalk where “clothes blend together with spontaneity and elegance” – as the designer relayed. It prevailed in a collection that blended formal and athleisure attire. Where there was a waistcoat or a suit, it was relaxed in structure, cut from cotton chambray and worn with a nonchalantly tied cravat, rather than a tie, and tailored tracksuit bottoms. Where there were knits, they were fisherman-knit cardigans; jackets were denim bomber silhouettes; and shirting was silk, but the silhouette was dipped and untucked. Footwear featured espadrilles, trainers and smoking slippers.

This is, of course, the designer’s signature when it comes to his eponymous label. His commitment to this nonchalant luxury is one of the main reasons why his brand has kept a loyal – and profitable – clientele over the years and, at the same time, makes his brand one of the few major fashion houses to remain entirely independent.

Like Fendi, Armani broke with show space convention, choosing to stage this outing in the courtyard of the brand’s HQ. As the models took their final bow, Armani joined them, organising them in synchronisation around the pebbled courtyard adorned with greenery and flowers so photographers could get their very best angle. And, just as during the Fendi show earlier in the day, it was like watching one of Italy’s finest directors at play.