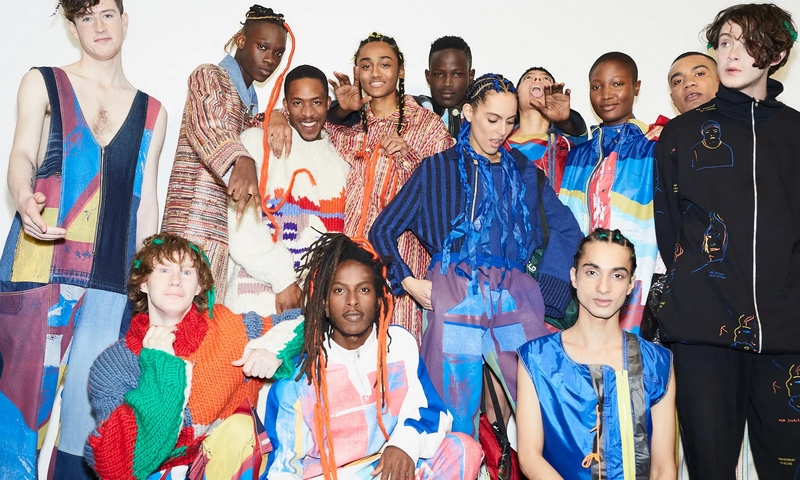 Following the news of Karl Lagerfeld’s death on Tuesday, London fashion week came to a close on a sombre and reflective note. But hope and positivity stemmed from the young talents who are set to continue his pioneering spirit.

The menswear designer Bethany Williams provided one of the highlights of the day. She took a special spot on the womenswear schedule for being the recipient of this year’s Queen Elizabeth II award, which recognises “the role the fashion industry plays in society and diplomacy”. Camilla, Duchess of Cornwall, came on behalf of the Queen to present the award, praising Williams for her “social and environmental conscience”, and for bringing “ideas and people together, put[ting] change for the good at the heart of her business”.

Everything to do with Williams’s collections – from the materials she uses (recycled, repurposed and reused fabrics), to the people who make them (such as the San Patrignano drug rehabilitation community in Italy), to the models who walk in her show (this season she worked with TITH models to cast homeless models and pay them the market rates) – is inclusive, democratic and sustainable. Far from the business of fast fashion, Williams is a purveyor of slow appreciation, wanting, to “create an alternative way of working that’s beneficial to people and the planet”, as she puts it.

Williams was awarded because of her commitment to “giving back”. The chief executive of the British Fashion Council, Caroline Rush, told the audience, a “sizeable percentage” of profit from Williams’s wholesale and distribution was returned to her partners to help them further their work and contribute to the foundation of “a sustainable and equal society”.

Related: Is fast fashion giving way to the sustainable wardrobe?

This collection was entitled Adelaide House in honour of the women’s shelter that provides support for former offenders in Liverpool. Twenty percent of the profits from the collection will be donated to the facility. The northern English city was an inspiration for the collection: one of the most striking looks was a suit woven from thin shreds of the local newspaper the Liverpool Echo, which collaborated with Williams to reuse and recycle its waste product. The suit’s buttons were made by the Manx Workshop for the Disabled on the Isle of Man.

The soundtrack to the show was devised by the British DJ Benji B, who remixed the voices of inmates at Downview prison in Surrey repeating one-liners including “change is a part of life”, “free ourselves” and “leaving old habits for new ones”. Williams told the Guardian backstage at the venue that she wanted “for people who couldn’t be here, for their voices to be heard”.

Rush told the audience: “This moment is about recognising a young creative and creating more opportunities for them to grow their business in a sustainable way.” It poignantly evoked one of Lagerfeld’s most famous quotes: “Youthfulness is about how you live, not when you were born” – a sentiment that 29-year-old Williams embodies in her quest to readdress what it means to design, make and wear clothes for a modern age.

Earlier in the day, last year’s inaugural recipient of the award, Richard Quinn, presented his third collection, Fearless Glamour. In the year since he won the first award, Quinn has enjoyed incredible success, increasing his stockists from 15 to 45 in the first month and having Amal Clooney wear one of his gowns on the red carpet of the Met Ball in May 2018.

This collection was set against a back drop of wild flowers and a period chandelier and, in line with the inclusive note sounded by many of his contemporaries, Quinn told guests ahead of the show that his intent was to create a “secret garden that everyone’s invited to”.

Quinn made his name from heady floral prints designed and produced in his print studio in south London, and this collection was an evolution of that aesthetic. While his garden ran the gamut from oversized blown-up flower power and paisley to blurred (borderline ikat) and wildflower prints, this time round there was also a heavy focus on delicate crystal and jewel appliqué. These are – as he acknowledged – techniques more often associated with couture.

“We really wanted to elevate what we were doing from last season and do our prints as embroideries to show a difference,” he said backstage, always referring to his work as the product of his design collective rather than his own as sole designer.