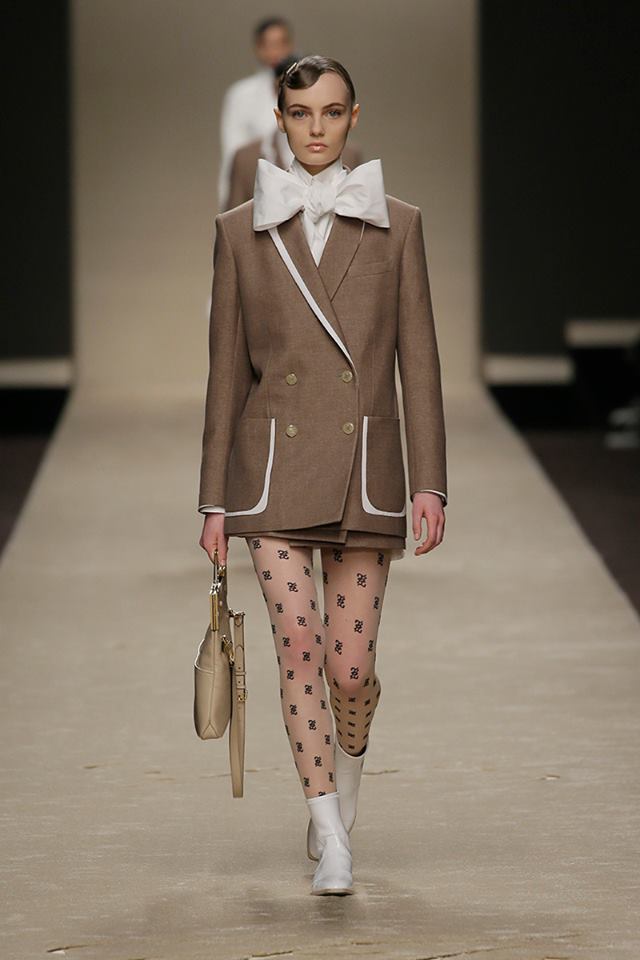 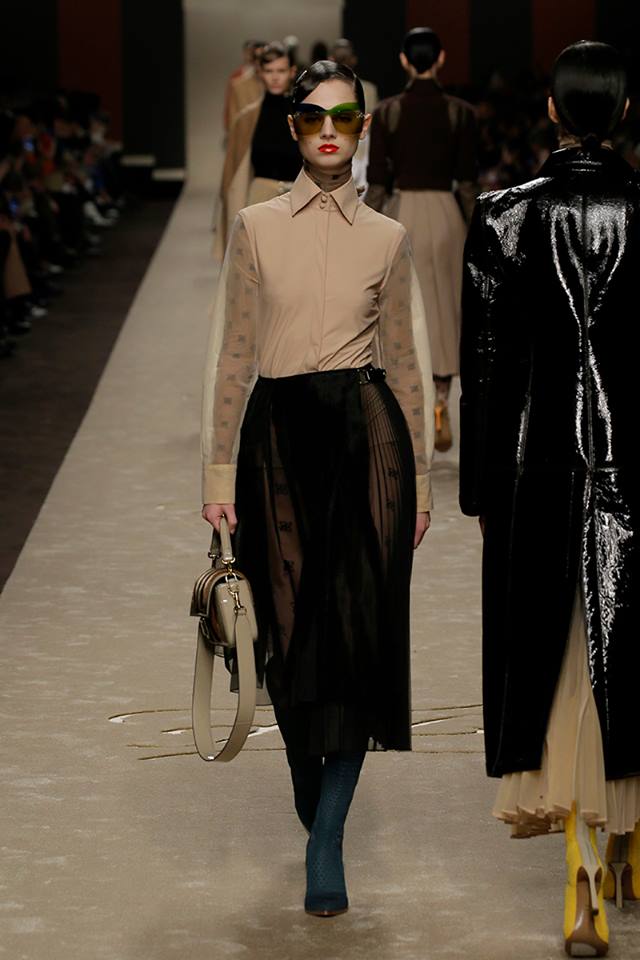 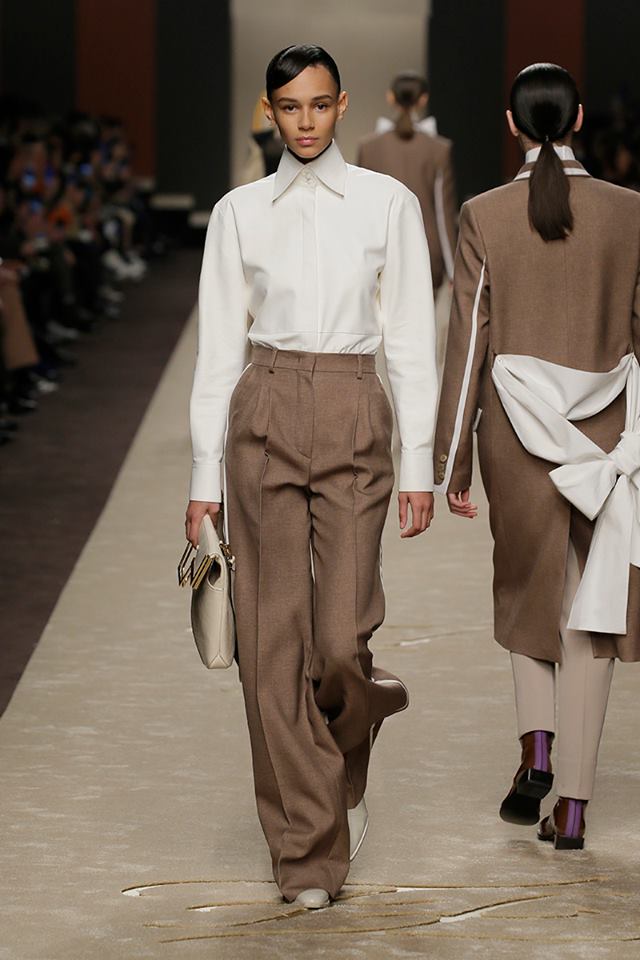 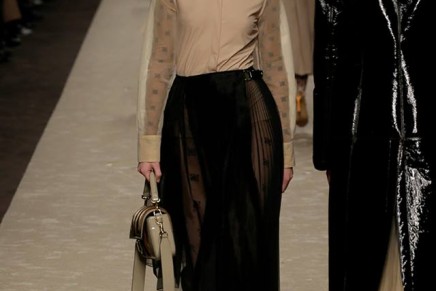 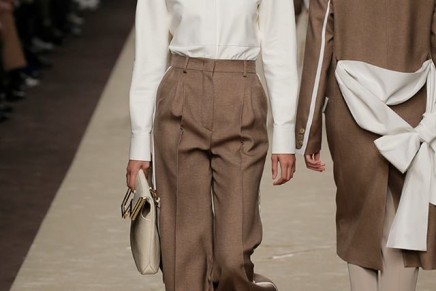 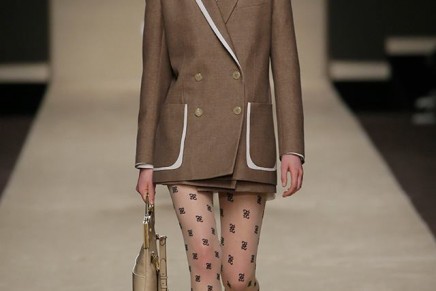 This article titled “Fendi at Milan fashion week: a memorial to Karl Lagerfeld” was written by Jess Cartner-Morley in Milan, for The Guardian on Thursday 21st February 2019 21.20 UTC

Before his death on Tuesday, Karl Lagerfeld had finished work on what was to be his final collection for Fendi. Every detail, right down to the sketches of key silhouettes which he drew each season to be reproduced and left on each seat in the show, was decided.

When they spoke a few days ago, “his only thoughts were on the richness and beauty of the collection,” recalled Silvia Venturini Fendi yesterday of her final conversation with the designer who ran her family brand for 54 years.

And so it was that the Fendi show, which went ahead in its usual Milan fashion week slot on Thursday, felt closer to a final appearance by Lagerfeld than to a posthumous memorial. This was 15 minutes of pure Karl. He was there in the chin-tickling height of the starched and pointy white collars, a style he himself always wore, and in the intertwined FF Karligraphy monogram he designed in 1981, embossed into the carpeted runway.

The juxtaposition of butter-wouldn’t-melt ladylike tailoring with tongue-in-cheek accessories, which Lagerfeld made a signature both at Fendi and at Chanel, was here in almost every look. A double-breasted blazer was worn with logo-printed tights, and a prim sheath dress with a red leather bum-bag. The models included many of Lagerfeld’s favourite names from the current A-list roster, including Kaia Gerber and Fran Summers.

Along with Lagerfeld’s sketches, each seat in the venue was set with a small card bearing an F, a loveheart and Lagerfeld’s signature, and, inscribed on the back, the date of his death.

After the show Silvia Fendi, the only member of the founding family still working in the business, took the place of Lagerfeld for a brief catwalk bow, to a soundtrack of Heroes by David Bowie, whose music Lagerfeld adored.

As Fendi disappeared backstage, a video screen flashed up a message: “54 Years Together” – a reference to Lagerfeld’s record-breaking tenure at the Italian house, which Silvia Fendi yesterday called “fashion’s longest love story”. A tribute film showed Lagerfeld at his desk, a box of his favoured Faber-Castell drawing pastels at one elbow and his ever-present glass of Diet Coke at the other, sketching himself in the outfit he wore for his very first day at Fendi in 1965. It was greeted with a standing ovation.

Silvia Fendi, a granddaughter of the founders, was the designer of the 1997 Fendi Baguette bag, one of the very first “It” handbags. In recent years she has expanded her role at the house to include responsibility for menswear and childrenswear, as well as accessories.

Fendi has declined to make any comment on a succession as yet, preferring to focus first on paying Lagerfeld “the homage he deserves”, but it is thought likely that she may be given a figurehead role at the brand. At Milan the name of Maria Grazia Chiuri, the Italian creative director of Christian Dior, a stablemate brand of Fendi’s at LVMH, has also been mentioned in connection with the Fendi succession.

The mood was lighter at Max Mara, where British designer Ian Griffiths knows exactly what the customer wants for next winter: a camel coat. Just as legend has it that the Inuit language has 50 words for snow, the Max Mara design studio has four for the colour others call camel. (Tobacco and beige belong to another category entirely.) A high-stepping phalanx of models, sleekly dressed in classically luxurious coats and heeled boots, made a strong case for Max Mara’s brand of grownup glamour. “I make a distinction between glamour, and fashion,” said Griffiths backstage after his show. “Glamour is more liberating. It lends a woman power.”

“The big problem for fashion designers is that we work for rich people, because we do rich clothes. But fashion is for everyone. It is difficult to find an intelligent approach to this,” said Miuccia Prada backstage after her latest show in Milan.

Her answer this season was to take the tropes of romance, and put an iron fist in a velvet glove. Or rather, a sheer black lace dress with a starched white work shirt, long-tailed for modesty, worn beneath as a petticoat. Or a strapless dress which exposed pillowy cleavage at the neckline, but revealed lace-up bovver boots below the hemline.

The show was entitled Anatomy of a Romance and the showspace lit at floor level with hundreds of lightbulbs. But the catwalk and seats were lined with cheap industrial insulation foam, hinting at more dangerous currents. There were roses and bows and sparkly Cinderella shoes, but also wadded military-green jackets, backpacks, and tracker hats.

To Miuccia Prada, the construct of a fashion show – “peopled with proposals of the idealised, the models” – is a mirror image of the Romantic-with-a-capital-R notion that “imagination could invent a better world, a perfect human being”.

“My worries,” said the designer, “are war, and extremism in Europe, and violence”. Romance, she said, represents idealism in the face of these. Asked by a reporter whether the long, centre-parted plaits worn by most of the models were an homage to Greta Thunberg, the Swedish climate change activist, Prada laughed. She was thinking of Frankenstein, she said: “[he] is monster, and rejected – but all he wants is love”. From there, she got to Wednesday Addams. “It’s just a fashion show, after all.”