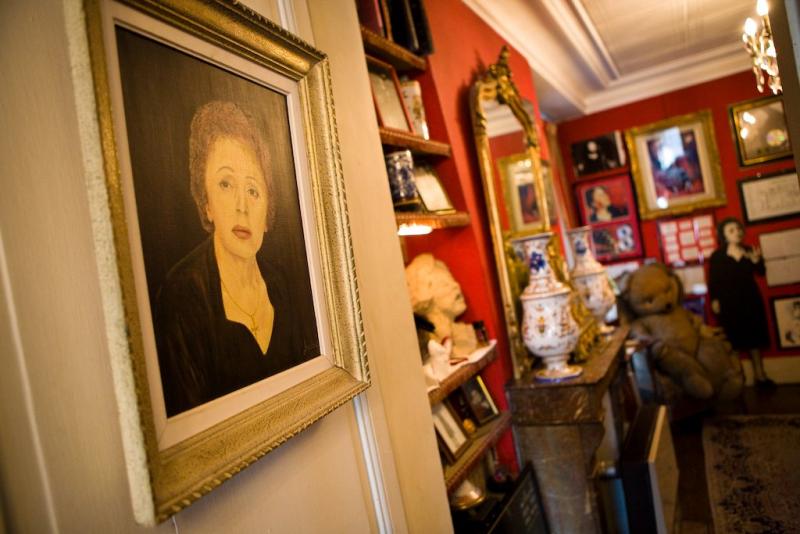 As the legend goes, Edith Piaf was born in a doorway at 72 rue de Belleville in the 20th arrondissement on 19 December 1915, the daughter of a busker and a cafe singer. Above the cracked marble doorstep is a plaque that says her voice would go on to touch the world, which is pretty much what happened. But first she sang at a tiny cafe down the street, Aux Folies, an art-deco relic with cubist mosaics, swirls of neon lettering above its zinc counter, and iron pillars plastered with handbills for shows dating back to the 1920s.

She sang here when she was young and poor, in between performing as a street musician with her father. In her day this was a gritty neighbourhood and it hasn’t changed much, with a shabby market by the metro station and blocks of peeling townhouses; this is the real, old Paris, the world she sang about, with its desperate cast of thieves and tramps and lovers. Growing up here was what gave her songs their sting.
• 8 rue de Belleville, 75020, +33 6 14 17 91 33, aux-folies-belleville.fr. Open daily 7am-2am

If there’s one place in Paris to hear the kind of chanson that Piaf sang, it’s this simple club where Piaf appeared while in her 20s. It’s in a cobbled lane in Montmartre, and in those days she lived across the street with a pimp who later tried to shoot her. The Lapin is atmospheric: a two-room cabin from the 1860s where generations of artists and ne’er-do-wells have caroused, from the impressionists onwards. Paintings dark with age line the walls, and the audience sits on rough benches drinking thimbles of pruneau brandy. Admission for a show costs €28, including one drink, and around 10pm the singing starts. There’ll be comic songs on the piano, ballads roared by patron Yves Mathieu, and, if you’re lucky, a dark-eyed siren singing of her broken heart. But it’s the accordion player who really takes you back, to Paris in the 1930s – gaslight in the alleys, hope on the horizon.
• 22 rue des Saules, 75018 Paris, +33 01 46 06 85 87, au-lapin-agile.com. Open Tues-Sun 9pm-1am

In the years of Piaf’s fame (from 1935 onwards), this was the classic brasserie for celebrities, its art deco hall host to everyone from Pablo Picasso to Jean-Paul Sartre. The stories of their exploits fill eight pages on its website. Piaf sang in the ballroom in the basement, among pillars carved to look like palm trees. Today it’s an elegant spot for lunch among tables stacked with silver trays of seafood on ice. It was refurbished in 2008, to the horror of many older Parisians, but the vibe is as glamorous as ever, with its stained-glass ceiling and mural-covered walls. The set menus are a steal (three courses from €31).
• 102 Boulevard du Montparnasse, 75014, +33 1 43 20 14 20, lacoupole-paris.com. Open daily noon-midnight

The tiny flat where she once lived is now the only museum devoted to Piaf. It’s run by Bernard Marchois, a fan who met her in 1958 and can talk at length about her life. Among exhibits in the two-room display are her famous little black dress and the boxing gloves of her greatest love, the prize-fighter Marcel Cerdan, whose death in a plane crash in 1949 plunged her into a lost decade of drink and drugs. She had written the ecstatic Hymne à l’Amour for him, and insisted on singing it on stage the night after hearing of his death: she got as far as the chorus before fainting.
• 5 rue Crespin du Gast, 75011, must phone to arrange visit on +33 1 43 55 52 72, no website

In 1963, 100,000 people followed Piaf’s coffin to her grave, stopping the traffic right across the city. By then she had become an icon of the place, an authentic voice whose life matched her songs of heartbreak and courage. Fellow singer Marlene Dietrich called Piaf “the soul of Paris”. Fans still gather at her grave in the celebrity-studded Père Lachaise cemetery. It’s a simple black slab of marble, with a vase of fresh flowers and a line from a song at the foot: “God reunites those who love each other.” After paying your respects, revive your spirits is the nearby Bar de la Place Edith Piaf, whose walls are covered with black-and-white photos of the diva at her best. In the square outside is a statue of her in full song, arms stretched above her head – though whether in rapture or despair it’s impossible to tell.
• 16 rue du Repos, 75020, pere-lachaise.com. Cemetery open Mon-Fri 8am-6pm, Sat 8.30am-6pm, Sun 9am-6pm. Free

In the West End, Charing Cross Theatre (Villiers Street, 08444 930 650, tickets from £22.50) is reviving “Piaf”, a searing, soaring play of her life by Pam Gems that has won awards and played almost non-stop worldwide for 40 years. It’s on until early in the new year, so booking is advised if you want to avoid any regrets …