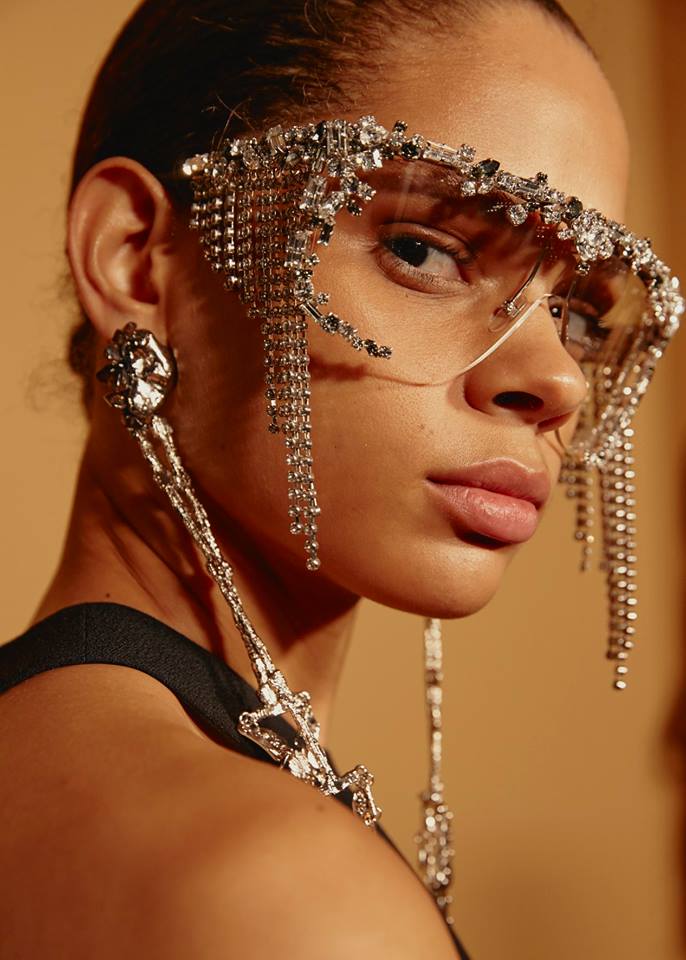 This article titled “Clare Waight Keller’s Givenchy show in Paris shimmers sharply in a tuxedo” was written by Jess Cartner-Morley, for The Guardian on Sunday 30th September 2018 21.46 UTC

The British designer Clare Waight Keller scored the biggest fashion triumph of 2018 five months ago when the Duchess of Sussex walked down the aisle of St George’s Chapel in a boat-necked Givenchy wedding dress. No Paris catwalk show, even one that brings city traffic to a standstill on a Sunday evening and scores the starriest front row of the week, could hope to compete.

Waight Keller could very easily have revelled in royal wedding afterglow. After all, any boat-necked Givenchy dress on a sales rail would be a home banker right now. Instead, she used her evening at Paris fashion week to show that her vision and ambition reached far beyond one beautiful wedding dress.

The first twelve models – nine women, three men – on a catwalk weaving through the marbled halls of the Palais de Justice all had almost identical haircuts, a neat ear-grazing schoolboy trim. “The casting was paramount,” said Waight Keller after the show. “I wanted the women and men to be indefinable. Something about that felt relevant – and appealing, actually.” Royal wedding or no royal wedding, Waight Keller is not about to be pigeonholed into fairytale frocks. After all, Audrey Hepburn – muse of Hubert de Givenchy, whose Funny Face wedding dress was a reference for that of the duchess – was rocking a gamine pixie crop back in 1954.

This season’s muse was not Meghan but Annemarie Schwarzenbach, a Swiss writer and photographer who became a Berlin celebrity during the Weimar republic. “I was researching silhouettes,” said Waight Keller after the show, “and I came across this spectacular looking woman, whose mother had never insisted on her dressing like a girl, and who as an adult dressed sometimes as a man and sometimes as a woman but always in a modest, elegant way.”

The designer was wearing an elegant short-sleeved navy blouse tucked into high-waisted black trousers, firmly belted, with cone-heeled court shoes. It was a quiet take on the look amped up on the catwalk. Those high-waisted trousers were worn with silk blouses, cropped trenchcoats or abbreviated biker jackets. Shimmering silver evening capes brought an otherworldly glory to matt black crepe tailored separates or loose, dark silk gowns.

Waight Keller’s show notes were opaque and telegram-brief. “Silver solidifies”, she wrote, underscoring the purposeful, hard-edged mood that saw models marching past at a frantic pace that deliberately jettisoned all memories of a glide down the isle. Not content with having sparked a trend for feminine bateau necklines earlier this year, this show suggested Waight Keller might be about to make the fashion world go doe-eyed for sharp tailoring, metallic and monochrome. The latest fairytale frock? it’s a tuxedo.