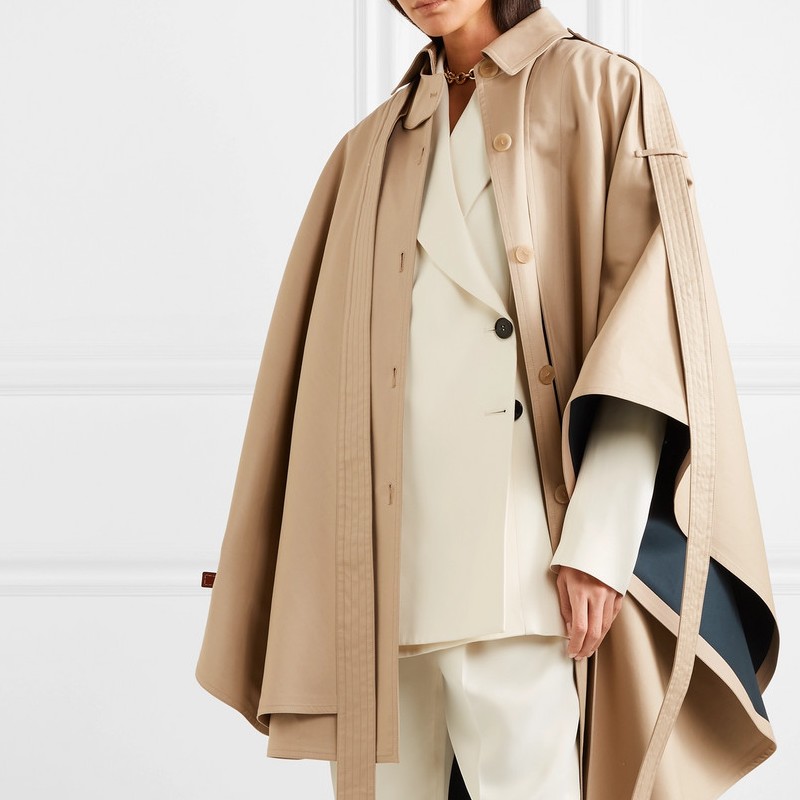 The coat to be seen in right now isn’t a coat at all – it is the cape that is shaping up to be the outerwear style of the year.

This week Kate Moss confirmed its comeback as she sported a black leather cape by Saint Laurent, while Amal Clooney incorporated a cape with the gown she wore to a Prince’s Trust event this month. The US congresswoman Alexandria Ocasio-Cortez wore a cape to last month’s State of the Union address in Washington, in tribute to the women’s suffrage movement; and Meghan Markle wore a caped dress by Christian Dior on a recent trip to Morocco.

The fashion psychologist Prof Carolyn Mair said it was no coincidence that women in positions of power and influence had adopted the style. “Capes offer protection, comfort and freedom and have been worn by professions which are typically associated with living meaningful lives, courage and altruism – such as the military and nursing – and totality,” she said.

“Because of these connotations, a cape looks powerful and this symbolism may be transmitted to the wearer if she or he believes in it.”

Capes were a popular option on the red carpet at this year’s awards ceremonies. Maya Rudolph, Glenn Close and Melissa McCarthy were among those who opted to wear cloaked ensembles at the Oscars. A month earlier, at the Golden Globes, Billy Porter, star of Pose, which has the largest ever transgender cast on television, stole the show with an elaborately embroidered pink and silver cape.

“It needed to speak to his amazing personality, the importance of his role on the groundbreaking show Pose, as well as the message we collectively want to send to the world regarding the fluidity of fashion, tolerance and acceptance,” its designer, Randi Rahm, told The Hollywood Reporter.

While capes have had intermittent style renaissances over the years, they remain most associated with superheroes. Mair points to a study published in October 2018 which analysed the effects of priming superhero images on prosociality and found that “subtle activation of superhero stimuli increases prosocial intentions and behaviour”. Mair suggests that “perhaps fashion has found these important factors in the cape. People are searching for meaning now.”

The worlds of fantasy and fashion collided late last year when the actor Ezra Miller wore the Valentino designer Pierpaolo Piccioli’s full-length quilted cape for Moncler to the premiere for Fantastic Beasts. Within 24 hours, Moncler’s social mentions increased by 54%, the global fashion search platform Lyst reported last month. Other designers have also been seduced by the style. JW Anderson, Miu Miu and Celine made the cape a key look in their autumn/winter 2019 collections.

“Our cape buy has hugely increased over the last few seasons and is bigger than ever for AW19,” said Natalie Kingham, fashion buying director at Matchesfashion.com, where a cape costs anything from £200 to £8,000.

“We always have a great response [to capes] from our customers. They add drama to your outfit, are very useful if you have a blazer or big sleeves and they always look very chic. They are very trendless and timeless.”

High street retailers have taken a more practical approach: & Other Stories, Zara, Cos and Asos sell hybrids such as caped blazers and trenchcoats from about £60.

“Given the turbulent world we live in, where wellbeing and social responsibility are increasingly on the agenda, it’s unsurprising that people are looking for clothing that is functional,” Mair said.

“Sociocultural associations could connote the cape as a representation of strength and caring. In addition to being functional, capes can act as a kind of cocoon that embraces and comforts us.”