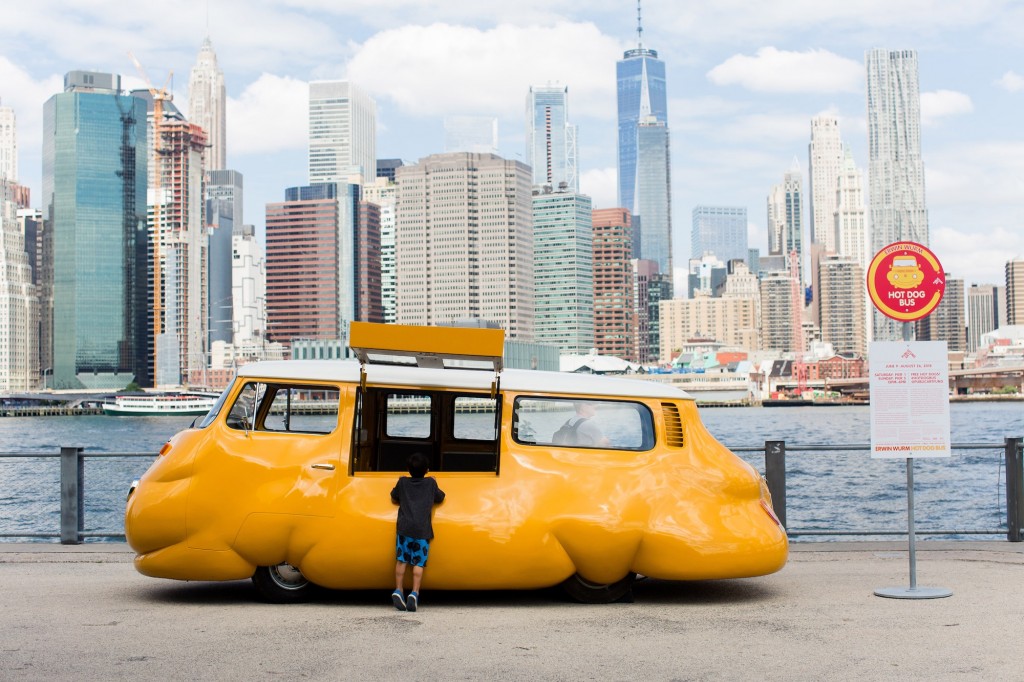 This article titled “A hot dog bus and a snowman in June: the best in US public art this summer” was written by Nadja Sayej, for theguardian.com on Monday 11th June 2018 17.13 UTC

Spending time in a museum doesn’t always seem like a fitting activity for the summer months and this year, a number of public projects in the US aim to allow visitors the opportunity to appreciate art while also soaking up rays.

This year has already seen a solar-powered Stonehenge in the Marfa desert, public murals in Cincinnati and an art chapel in Austin, but the coming weeks add even more diverse and intriguing sights across the country. From free boat rides around New York to California skyscraper video art and a snowman in a park (yes, a snowman), here is the latest crop of public artworks to catch this summer.

New York summers don’t traditionally arrive with a chill but one piece is set to bring some below-zero weather to the scorching city. Opening on 11 June, the Swiss sculptor Peter Fischli (collaborator of David Weiss, who passed away in 2012), is showing Snowman, a sculpture of a snowman inside an industrial freezer in the middle of the Museum of Modern Art’s sculpture garden. This 1987 artwork was made in response to the French artist Ben Vautier, who once asked “If everything is sculpture why make sculpture?” Weiss says the snowman was first a commission of a German thermic power plant, year round. Though the snowman is an easy-to-make sculpture, few can get away with it during the summer months.

Starting this month, the Austrian artist Erwin Wurm is giving out free hot dogs every weekend until 26 August for his art project, Hot Dog Bus. By serving classic hot dogs out of a vintage Volkswagen microbus which the artist has redesigned to look like a glob of fat, the goal is to get us thinking about putting on the pounds as a form of human sculpture. “I thought it would be cool to do something where the public has not only a visual benefit but also a physical benefit,” said Wurm. “I’ve always addressed gaining or losing weight as a sculptural work because it’s a work on volumes; the sausage could be a key component of gaining or losing weight.” (Even though this artwork will be in Brooklyn, vegan hot dogs and gluten-free buns will not be available.)

Kaws at One Campus Martius

The Brooklyn street artist Kaws (AKA Brian Donnelly) is known for designing perfume products for Pharrell and collaborating with Nike on sneaker projects. Now, he has unveiled his latest piece of public art in Detroit. A project of the Detroit art gallery the Library Street Collective Gallery, the 17ft tall bronze sculpture stands outside the foyer of the One Campus Martius office tower. The new sculpture, entitled Waiting, depicts a parent and child in a moment of pause. Within a week, the artwork was already vandalized by underground graffiti artists but has been acquired by real estate mogul Dan Gilbert and his wife Jennifer Gilbert, who are building what they call a Detroit Art Collection (and also own artworks by Shepard Fairey). “It is very important to us that the works we choose for the collection are both approachable and strategically located where everyone can enjoy them,” said Jennifer Gilbert in a statement. “We chose One Campus Martius as the location for Waiting because it is in the heart of the action, where the sculpture can become synonymous with downtown’s momentum.”

Seesaws, oversized diamonds and other fun pieces by artist Virginia Overton are currently on view at the Socrates Sculpture Park in Long Island City. The newly commissioned works for her Built series includes a 1990 Ford pickup truck turned into a fish pond, a quirky billboard and a crystal-shaped sculpture made of iron. The Tennessee-born artist is known for collecting broken machinery and upcycling these found objects into artwork. Here, she is exhibiting stuff she has found and collected over the past year including steel roofing trusses from Philadelphia, plexiglas found in New York and a gantry found near the art park. “Where some see beams, pipes and trusses as the most basic elements of architecture, Virginia Overton sees limitless potential for new structures,” said Jess Wilcox, the exhibitions director at Socrates Sculpture Park. “This impulse to reorient one’s perspective on what’s readily available in order to create wondrous things parallels Socrates grassroots DIYorigins and ethos.”

The photographer John Raymond Mireles has traveled across the country for his Neighbors Project, which features 86 portraits of Americans in all 50 states. The series is on view at the First Street Green Art Park, a former building lot turned public art space in New York’s Lower East Side until 7 July. The project began in 2015 when Mireles started photographing his neighbors in San Diego. “My goal with this work is to unite Americans across their geographic, political, racial and economic differences,” said the artist. “By bringing people together through my art, I hope to create a sense of connection between viewer and subject and, hopefully, promote empathy across the many differences that divide Americans.”

A 26ft tall statue of Marilyn Monroe has been placed in Stamford Park in Stamford, Connecticut, and it has been getting some backlash from the locals. Marilyn’s backside is facing the First Congressional church of Stamford, and some locals think its disrespectful to the church. The piece, entitled Forever Marilyn, is based on the iconic photo of the Hollywood star wearing a white dress in the 1955 film The Seven Year Itch. It’s one of 36 sculptures by Seward Johnson on loan across the city as part of the annual Art in Public Spaces Program, which happens every summer. “Marilyn has come to represent beauty, and the white dress blowing up around her is a type of teasing sensuality,” writes Johnson on his website. “There is something about her pose; the exuberance for life without inhibition – it expresses an uninhibited sense of our own vibrancy.”

On 1 July, New York artist Tauba Auerbach is painting a historic boat into a marbled artwork that will take art enthusiasts on hour-long ferry trips around New York. The John J Harvey fireboat was built in 1931, retired in 1994 and is famous for helping people evacuate lower Manhattan during the 9/11 attacks. Auerbach’s piece, Flow Separation, the dazzling marble pattern is meant to restore the rusted paint and “camouflage” from others (after this mobile artwork is finished, it will be repainted to its original colors). Boat trips will take place on weekends from 13 July to 23 September, in groups of 80 people and last up to an hour. The free rides will depart from Pier 6 (Brooklyn Bridge Park), Pier 25 (Hudson River Park) and Pier 66a, until 11 November; the centennial celebration for the end of the first world war. “I didn’t want to ignore the John J Harvey’s identity, so I took the boat’s usual paint job and scrambled it,” said Auerbach. “The palette also exaggerates the fact that ‘dazzling’ was more about confusing and outsmarting, rather than about hiding, as I like those instances where cleverness is an antidote to brute force.”

This summer, the New York artist Jacob Hashimoto has brought two of his artworks to Governors Island in New York City. His first piece, The Eclipse, is a collection of rice paper kites which will be shown throughout the St Cornelius Chapel. A second artwork by Hashimoto, Never Comes Tomorrow, a collection of wooden cubes and whimsical steel works, will hang underneath the church’s Liggett Hall Archway until 31 October. While the works are at the intersection of the artist’s interest in architecture, history and cosmology, they’re visually stunning, too.

Jim Campbell at the Salesforce Tower

The Salesforce tower in San Francisco is being lit up with over 10,000 LED lights for a public art project by local artist Jim Campbell. The piece, entitled Day for Night (a reference to the 1973 film by Francois Truffaut), is a nine-story electronic sculpture sitting atop the skyline’s tallest skyscraper. The artwork features a rotating cast of low-resolution videos that the artist filmed across the city; the videos were made by multiple cameras set up around San Francisco, each capturing a different element of the city. From clouds to ocean waves and dancers from the Alonzo King Lines Ballet, videos shot the day-of are processed and screened that night. Campbell recommends the artwork is best viewed 20 miles away, to catch the entire skyline along with the ever-changing artwork.