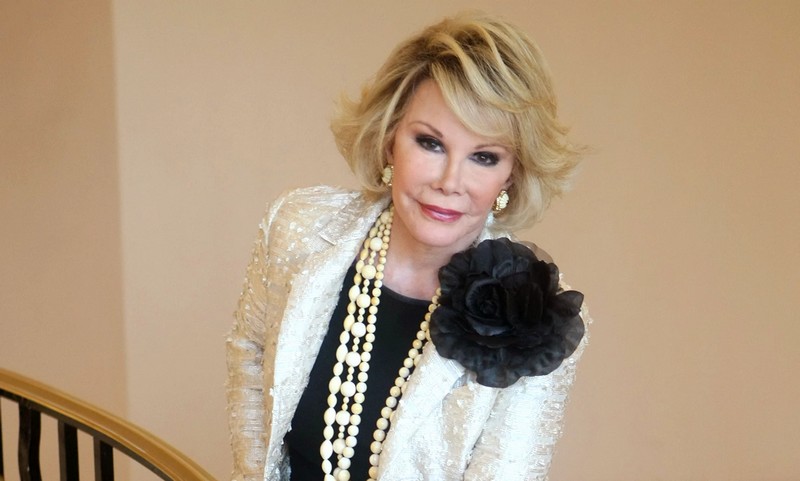 This article titled “200 items from Joan Rivers’s New York penthouse to go up for auction” was written by Ellen Brait and agencies, for The Guardian on Tuesday 8th March 2016 18.57 UTC

This summer fans will be able to purchase paintings, jewelry and even a dog bowl once owned by the late comedian and TV personality Joan Rivers.

Items from her New York penthouse will be auctioned off by Christie’s with some proceeds benefiting God’s Love We Deliver, which distributes food to those with severe illnesses, and Guide Dogs for the Blind. The online auction, offering approximately 80 lots, will begin on 16 June with a live auction of more than 200 lots in New York on 22 June.

The sale will “encompass the breadth of the late entertainer’s exceptional and eclectic taste, including decorative arts, paintings, fine French furniture and Fabergé”, according to Christie’s.

The items for sale, which range from $500 to $200,000, include couture gowns designed by Bob Mackie, jewels from Cartier, Van Cleef & Arpels and Harry Winston, a 1915 painting by French artist Edouard Vuillard, a Fabergé jeweled Lily of the Valley leaf piece and a custom engraved Tiffany’s water bowl previously used by Rivers’ dog Spike.

Rivers was the first woman to host a late night network television talk show, The Late Show with Joan Rivers, which aired in 1986. Over her long career she was recognized for her work as a comedian, talkshow host, actor and writer.

Rivers won a Daytime Emmy for outstanding talk show host for her work on The Joan Rivers Show, and was nominated for a Tony award for best actress in a play for her performance in Sally Marr. In 2015, Rivers was posthumously given a Grammy award for best spoken word album.

She died in 2014 at age 81 from complications following an outpatient medical procedure and left her estate to her daughter, Melissa Rivers. Melissa wrote about her relationship with her mother in a book published last year titled The Book of Joan.

Melissa said in a statement that the auction offers a “through-the-keyhole experience for fans across the globe to see and buy items from my mother’s amazing Manhattan penthouse”.

“My mother’s legacy as a much loved comedienne and philanthropist will be commemorated in this collaboration with Christie’s,” she added. “And her generosity to charitable causes is something I will continue in her honor.”