The royal diamonds on show at Buckingham Palace 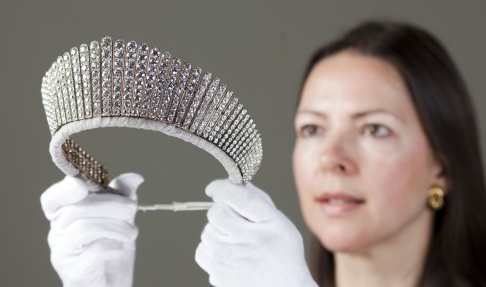 Diamond, the hardest natural material known, carries associations of endurance and longevity. These qualities, allied to the purity, magnificence and value of the stones, have for centuries led rulers to deploy diamonds in regalia, jewellery and precious objects.

London’s Buckingham Palace celebrates Queen Elizabeth II’s diamond jubilee with more than 10,000 diamonds that will go on show from June 30 to July 8 and July 31 to October 7, during the palace’s summer opening.

This spectacular exhibition at Buckingham Palace will show the many ways in which diamonds have been used by British monarchs over the last 200 years. The exhibition includes an unprecedented display of a number of The Queen’s personal jewels. The exhibition will reveal how many of these extraordinary stones have undergone a number of transformations, having been re-cut or incorporated into new settings during their fascinating history.

The highlights include items made from the world’s largest diamond, the “Cullinan” diamond, named after the owner of the mine in South Africa where it was discovered in 1905. Several pieces of jewellery, such as the Delhi Durbar Tiara, Queen Victoria’s Fringe Brooch and the Kokoshnik Tiara, are on display for the first time.

The Kokoshnik tiara takes its name from the traditional Russian folk headdress. The headdress was adopted by the Imperial family in the 19th century and used as the inspiration for jewelled tiaras worn at court. Family ties between the Russian and British royal families ensured that the Russian style was adopted in the West, where the Kokoshnik tiara became fashionable in the late 19th and early 20th centuries. This example was made for Alexandra, Princess of Wales, sister of Empress Maria Feodorovna, consort of Tsar Alexander III of Russia. It was presented for her 25th wedding anniversary in 1888 by the ‘Ladies of Society’ (365 peeresses of the United Kingdom) and was made by R & S Garrard & Co. at a cost of £4,400. Each bar is pavé-set with brilliant-cut diamonds, set in white and yellow gold.

Like tiaras of a similar design, it could also be worn as a necklace. Queen Alexandra wore it often, notably for the marriage of the Duke of York (later King George V) to Princess Victoria Mary of Teck in 1893. Queen Mary inherited the tiara and wore it frequently. It was bequeathed to The Queen in 1953.

Exhibition curator Caroline de Guitaut said, ‘The exhibition shows how over the past three centuries monarchs have used diamonds to display magnificence, whether in personal adornment or as a statement of power. Each piece demonstrates breathtaking workmanship and extraordinary ingenuity in design. Diamonds have of course long been associated with endurance and longevity, so this is a very fitting way to mark Her Majesty’s 60 years on the throne.’ 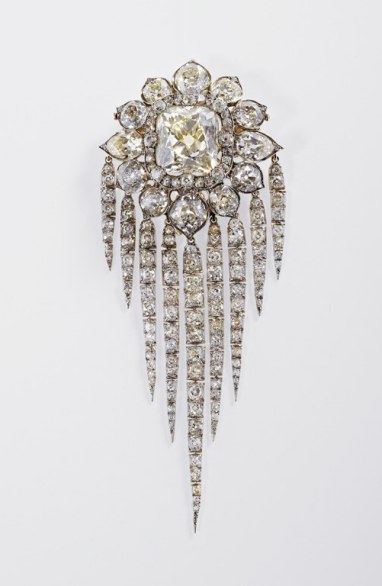