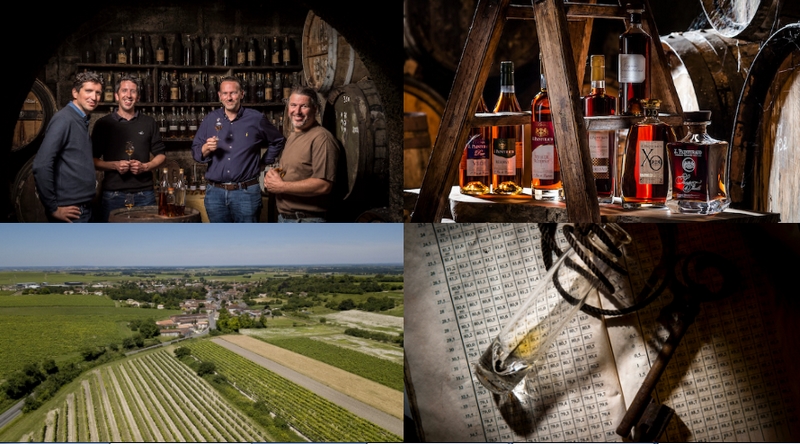 This article titled “10 of the best cognac distillers, tours and tastings, France” was written by John Brunton, for The Guardian on Thursday 31st January 2019 06.30 UTC

Cognac is one of France’s most iconic products, yet little of it is consumed at home: 98% is exported. Authentic cognac can only be produced from a specific region but this vast vineyard stretches from the grand town of Cognac itself inland across the Charente region and over to the Atlantic coast. It is a delight to explore, with winemakers, distillers and the famed maisons de négoces (cognac merchants) open for visits. Most people begin in Cognac with one of the multimedia tours (around €20) of the likes of Hennessy, Martell or Rémy Martin, all established since the 1700s. Alternatively, many houses and winemaker-distillers in the nearby countryside offer just as interesting (if no-frills) tours for free. Many sites are open all year and from November to 31 March it’s possible to see the distilleries in action.

The 90-minute tour of this traditional maison de négoce is the perfect introduction to understanding cognac. Find it in Cognac’s backstreets and then stumble into its Dickensian office, with clerks bent over antique sloping desks. Since 1905, the owners have been the Norwegian Bache Gabrielsen family. As the guide explains the complex process of cognac production, visitors may glimpse Jean-Philippe Bergier – the revered maître de chai, (cellar master) – sitting in a side room that resembles a pharmacy with its many sample bottles of cognacs, which he tests and sniffs while he searches for new blends. The tour continues in the cellar and distillery, where visitors discover what is known as Paradis, where precious vintages going back a 100 years are stored under lock and key in giant glass demijohns, a magic ingredient waiting to be used for a prestigious blend.
• Free visit and tasting of five cognacs, 32 Rue de Boston, Cognac, bache-gabrielsen.com

Cognac’s majestic royal castle was the birthplace of one of France’s most illustrious kings, Francis I, but after the French Revolution it was acquired by the entrepreneurial Baron Otard who realised it was the perfect venue for his newly founded cognac house, with Renaissance salons transformed into barrel-ageing cellars. As with Richard Hennessy from Cork and Jean Martell from Jersey, Otard was another of Cognac’s 18th-century mavericks, arriving from across Europe to make their fortune. His family came from Scotland and Norway, and although today the maison is owned by Bacardi, an 11th-generation Otard is still ambassador for the brand. The entertaining guide brings to life the long history of the chateau – even Richard the Lionheart stayed here – and the Otard method of production, including a sensorial test illustrating the different aromas created by light and heavy toasting of the barrel.
• Tour and tasting of two cognacs €21, 127 Boulevard Denfert Rochereau, Cognac, chateauroyaldecognac.com

In the bustling town of Jarnac, birthplace of François Mitterand, this is one of the top tours for explaining the A-Z of cognac production in layman’s language. Visual exhibits emphasise the crucial importance of the vineyard and fermentation, the way a double distillation transforms cloudy unfiltered wine into clear eau-de-vie, ageing and blending, the Paradis and the mysterious part des anges, whereby evaporation claims up to 40% before the cognac is finally bottled. Hine is the only cognac house to receive a royal warranty, perhaps because the founder, Thomas Hine, was from Dorset. He arrived in Jarnac in 1791 to learn the secrets of cognac, and married his boss’s daughter.
• Free tour and tasting of three cognacs and, this summer, a cocktail, 16 Quai de l’Orangerie, Jarnac, hinecognac.com

Cognac cannot exist without the 4,000-odd viticulteurs who tend, harvest and ferment acidic ugni blanc grapes into wine that distillers and maisons de négoces distil and age. But more than 1,000 of the winemakers are also bouilleurs de cru – distillers themselves – who sell to the big maisons but also keep a part to create their own single-vineyard cognacs. This 40-hectare (98.8 acres) domaine is run by brothers Jean-Philippe and Emmanuel, who describe to visitors how, in 1934, their grandfather first started making his own cognac to differentiate themselves from Rémy Martin, who then – and today – buy most of their produce. The vines run right outside the house, and the 90-minute tour passes through the distillery where they use two copper pot stills traditionally mounted on red-brick gas-fired stoves, and then a tiny cellar and tasting room jam-packed with barrels.
• Tour and tasting free, by appointment only, 3 Rue Gourry, Segonzac, cognacpainturaud.com

Dany Barbot and her brother Serge Marcadier offer a splendid experience for visitors, beginning with a bumpy vineyard tour in a 1943 US army jeep. Back in the distillery, Dany, a retired teacher, gives a detailed description of the distilling process: the première chauffe (first heating) distillation producing 30C alcohol, the second, bonne chauffe, trickling out at 72C. Tasting its four artisan cognacs it is easy to appreciate the differences from its 10-year-aged VSOP to the 40-years Hors d’Âge. Serge rents out a nearby farmhouse B&B, where a double room costs €52 with use of a big swimming pool, outdoor barbecue and modern kitchen.
• Free tour and four cognac tasting, Le Pible, Segonzac, barbot-marcadier.com

Bertrand and Sabine de Witasse gave up high-powered jobs in Paris to take over the family estate 24 years ago. Bertrand learned winemaking and distilling from scratch, and Sabine now acts as a guide, explaining: “I am going to recount the reality of our daily life, our family story, and show how one of the world’s most sophisticated, technically perfect products, actually starts out life here in this rustic, chaotic, rural environment.” Their imposing farm was built in 1861 and the chai (storeroom) stretches for 150 metres, from the point where the grapes arrive from the harvest, direct into the press, then pumped into concrete cisterns to ferment into wine and then, at the end, are two pot stills for distilling. They are one of the rare bouilleurs de cru who still heat with wood rather than gas, but it means Bertrand spends two months living and sleeping next to the 1926 alambic – as every 45 minutes he needs to restoke the wood fire.
• Free tour and tasting of four cognacs, 137 rue de Porches, Angeac-Champagne, raisonpersonnelle.wixsite.com

A cognac visit with a difference. Dynamic Sophie Blanchard runs one of the region’s rare organic vineyards, produces her own €5-€8 red, rose, white and bubbly wine, and sells 75% of her production direct to customers who have been loyal since her pioneering father made the estate bio in 1972. The tour takes in the vineyard, cellars and distillery, then Sophie makes everyone feel at home round the tasting room’s bar, letting them in on insights, such as cognacs bought directly from winemaker distillers like hers are usually aged far longer than the classic commercial bottle. A VSOP (Very Special Old Pale) has a minimum ageing of five years but an artisan cognac may be 10-15 years old, while the top-end XO (Extra Old) could be 25 years old rather than the statutory 10.
• Free visit and cognac and wine-tasting, 1 Chemin de Routreau, Boutiers-Saint-Trojan, brard-blanchard.fr

One of the crucial ingredients in the mix that creates cognac is the barrel used for ageing. The cask must be French oak: wood that imparts aromas such as vanilla, caramel and spicy ginger. The countryside around Cognac is dotted with artisan cooperages but only the family-run Allary opens to the public. Be prepared for a lot of noise and action: from the hammering and sawing, dust, smoke and leaping flames as they toast the inside of the barrels, while one bearded cooper performs what looks like a manic dance round the barrels, pounding the staves with a giant hammer.
• Four tours (1-1½ hours) daily, €4pp, under-12s free, 29 route de Cognac, Archiac, tonnellerie-allary.com

Jovial Frédéric Audouard presides over his old-fashioned bistrot from behind the wooden bar where you will see a cross-section of Cognac life – from pinstripe-suited négociants to artisans from the barrel cellars wearing faded blue overalls – noisily enjoying an aperitif before settling down for a meal. The plat du jour costs €12 and could be traditional Charentais gigot d’agneau (leg of lamb confit) with white beans or sausages resting on a bed of lentils; the outstanding wine list stretches to some 600 vintages, with more than 60 cognacs to choose from.
• 42 allee de la Corderie, Cognac, restaurant-lechai.com

Although there are several reasonably priced hotels in the centre of Cognac, this is in a sprawling park along the Charente river. It is a relaxing resort that could be in the middle of the countryside. The standard hotel rooms are in a renovated red-brick furniture factory but for a supplement it’s possible to reserve a roulotte gypsy caravan, a cosy wooden lodge or romantic waterside stilt cabin with balcony looking out over the river. Great for kids, with its outdoor games, a big pool, as well as a gym.
• Lodge doubles from €79 B&B, 16 rue des Pontis, Cognac, quaidespontis.com