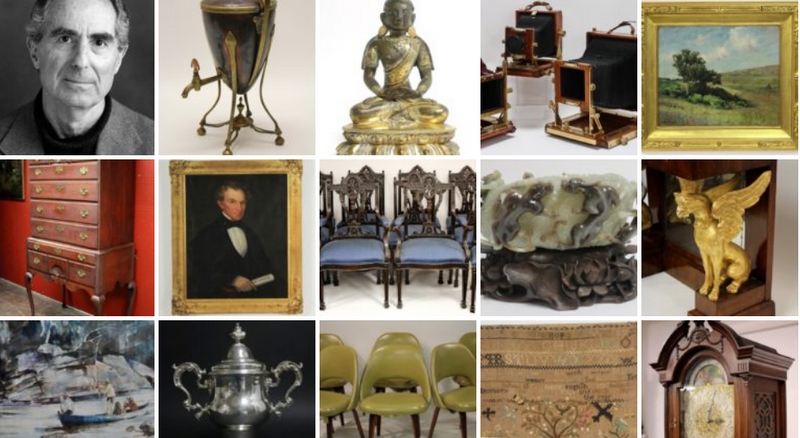 This article titled “Yogi Berra’s baseball bat and a $17,500 typewriter: a visit to the auction of Philip Roth’s estate” was written by J Oliver Conroy in Litchfield, Connecticut, for theguardian.com on Thursday 25th July 2019 05.00 UTC

About 10 years ago, Philip Roth asked his friend Russ Murdock – the longtime caretaker of Roth’s rural Connecticut home and, as he got older, of Roth himself – to carve his headstone. Roth told Murdock, a stonemason, to model it on Albert Camus’s: just names and dates, in simple block letters, etched into a stone Murdock later dug up on the property.

Related: Philip Roth’s apartment is on the market – but his privacy shouldn’t be

Then, last spring, Roth, who had a heart condition and preferred to spend winter in New York, emailed Murdock saying he intended to be back in Connecticut for Memorial Day, “if this old carcass will let me”. It didn’t: he died a few weeks later aged 85.

I met Murdock at the auction of Roth’s estate, held last Saturday at an auction house in Litchfield, Connecticut. Roth was married twice and had many girlfriends, but he died unmarried and with no children. Once, a girlfriend of Roth’s, believing him lonely, gave him two kittens. He adored them but soon gave them back, saying they distracted from his work.

Although Roth is indelibly associated with Newark, New Jersey, he split much of his adult life between his apartment in New York and an 18th-century farmhouse in Warren, Connecticut. With its horse farms, stone walls, unpretentious but expensive colonial houses, and Unitarian churches, the area is suspiciously similar to the austere New England hermitage of the ageing writer EI Lonoff, whom Roth describes, in The Ghost Writer, as living quietly “in a clapboard farmhouse” at “the end of an unpaved road 1200ft up in the Berkshires”.

In a 2000 New Yorker profile, David Remnick described Roth’s visits to New York as “periodic raids on Babylon”, and Murdock told me that the writer was a kind of gregarious monk: devoted above all to his work, obsessively disciplined and devoid of hobbies, but emerging occasionally like a groundhog from its burrow to tell jokes and shoot the shit. At the Murdocks’ annual pig roast, his father and Roth would complain about their ailments to each other. Most of the guests had no idea who Roth was.

Murdock, who is in his early 60s, is a conservative, small-town Yankee with a pistol permit who loathes cities. He has been to New York only twice in his life – once, in an emergency, to drive Roth to his cardiologist, and once for the writer’s memorial service. He found it upsetting to watch the “Sotheby’s people” trampling through Roth’s house after his death, assigning monetary values to his effects.

The Newark public library will receive Roth’s massive book collection, so the remaining estate was mainly furniture – Roth liked it solid, wooden and brown – and a few personal effects. His shortwave radio went for $450, his old-school voicemail rig for $250, and someone forked over $550 for his Samsonite rolling luggage – still marked, the auctioneer noted, with his name and address.

The heavy-hitting buyers were anonymous and bid electronically. The in-person crowd of about 60 people, clad in pastel sundresses, tortoiseshell glasses and contrast-collar dress shirts, appeared more interested in spectating than buying.

The crown jewels of the sale were the typewriters: a workhorse Selectric went for $4,800; Roth’s Olivetti, in its original case, for $17,500. Since he had no family, the money will go to an unnamed charity.

Roth was “a ball” and had a “caustic sense of humor”, Murdock told me as we sat in the cab of his pickup. He has read most of Roth’s books and says Roth’s characters sometimes bear the names of Connecticut townspeople he disliked. When he asked him about it, he says Roth just smiled and said: “If you sit by the river long enough, you can see the bodies of your enemies float by.”

In its obituary, the New York Times called Roth “the last of the great white males”, a testament to his enormous literary stature – he wrote 30 books and won every major literary prize beside the Nobel – but also an acknowledgement that some critics have accused his writing of sexism.

The writer Emily Gould coined the phrase “mid-century misogynists” to describe Roth and peers like Norman Mailer and John Updike, though she also said she loved Roth’s books and admired their exuberant and “unrepentant” quality. In a 2009 essay, the writer Katie Roiphe argued that Roth and his compatriots were preferable over the “self-conscious paralysis” and more subtle sexism of contemporary male novelists. For his part, Roth credited the National Organization for Women with boosting his book sales.

At his death, Roth was the most famous living Jewish writer. His writing comes back again and again to Jewish themes; his dialogue is salted with Yiddish. Portnoy’s Complaint, the book that made him famous – or infamous – is a giant oedipal joke about a sexually frustrated Jewish boy who at one point has sex with a piece of liver – which his family later eats for dinner.

But Roth thought of himself as an American novelist, not a Jewish American novelist. The central questions and anxieties of his writing concern what it means to be American. As Elizabeth Pechoda wrote recently in the Nation, he “was the bard not so much of Jewishness but of Americanness, of belonging and patriotism”.

One of Roth’s most prized possessions was a baseball bat once owned by Yogi Berra, who played for the Newark Bears before joining the Yankees. It sold for $4,000. Murdock told me Roth kept it leaning against the wall of his house as a guard against burglars.