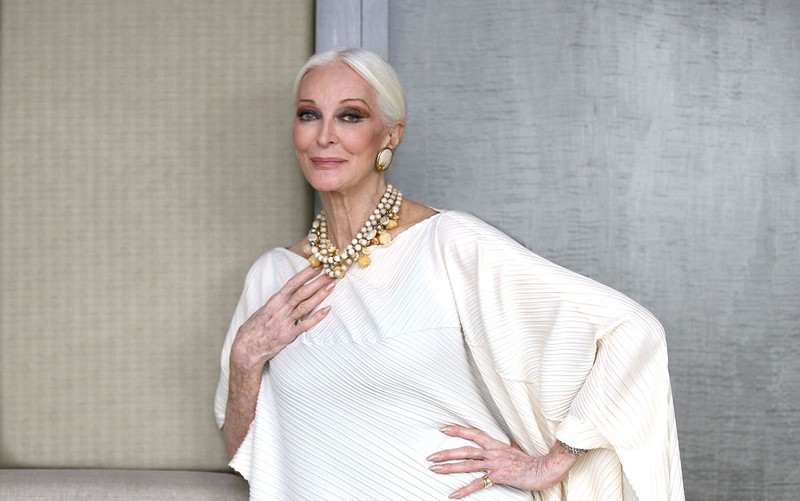 This article titled “Why does fashion hate old people?” was written by Hadley Freeman, for The Guardian on Monday 3rd August 2015 13.27 UTC

Why does fashion hate old people?

You know, fashion gets a lot of grief from outsiders. Its fetishisation of skinniness, wealth, aesthetics, sexiness and, yes, youth, are all routinely used as sticks with which to beat it. Only last week Topshop was roundly mocked for using mannequins so skinny they barely made anatomical sense. And this is all perfectly to the right and well and good. Criticise away! Lord knows this column does it often enough.

But here’s the rather uncomfortable truth about fashion: all it actually does is take society’s own desires, own attitudes, and exaggerate them shamelessly. This is certainly not to excuse the fashion industry’s loopiness, stupidity and even occasional amorality. But it does explain why, despite the general consensus that fashion is demented, the industry is enormously successful. This also, I suspect, clarifies why people get so upset by it. If fashion items were sold on promises to make everyone, say, grow a third arm, no one would give a good god damn. Instead, they would look at the adverts featuring three-armed models brandishing wildly expensive handbags (an extra arm so you can carry more £1,500 bags – genius!), shrug, laugh and carry on with their day. They would not campaign against these adverts on social media and newspapers would not run long think pieces about how this three-armed fascism was corrupting the minds of our young.

The reason people – women, mainly, if we’re honest here – get so especially upset by the fashion industry’s obsession with youth and skinniness is because it is echoing that dark, cruel voice that lives in the heads of so many of us, the one that encourages our own self-loathing. For all that people criticise fashion’s obsession with thinness, the fact is it is very rare to find any non-fashion magazine that doesn’t in some way validate this view, by using very slim models or running nonsense articles about “detoxing” and “clean eating”. What the fashion industry does, really, is exploit our own worst thoughts about ourselves. Look, fashion is a billion–dollar industry, and you don’t make a billion dollars by being stupid (although an obvious exception to that rule comes in the form of future US president Donald Trump.)

Which brings us, eventually, to its attitude towards old people and, in the fashion universe, this means anyone over the age of 40. Never mind the industry’s occasional inclusion of older women in advertising campaigns – such as Céline hiring Joan Didion, say, or Joni Mitchell shilling for Saint Laurent – because this is just about novelty, tokenism, faddishness, even. Having an older woman in a fashion campaign is the new having an overweight pop star appear in your fashion show, which was a very popular schtick about five years ago. It doesn’t mean the fashion industry actually thinks older women, or bigger women, are attractive, a point underscored by the fact that all the models on the runway are still themselves notably young and thin. It just means the industry wants to give itself a little pat on the back for being so deep it can occasionally deal with an older or bigger person (freaks) without actually vomiting all over its quilted Burberry jacket.

Sticking with just the ageism issue for the moment, this is clearly a ridiculous state of affairs. Forget about the moral issue – it’s not even logical. Only a very small percentage of women can afford to buy designer clothes and, of those, an even tinier percentage of them are under 40. And yet, designers still insist on having their clothes modelled by extremely young women – children, in some cases, such as 14-year-old Sofia Mechetner, who appeared in Dior’s couture show last month. Do many 14-year-olds now buy couture? Is this what the kids are doing in between WhatsApping and taking something the media insists on calling “hippy crack”? I’m going to go with “no” here, so quite why a 14-year-old should be held up as the couture ideal by a design house is beyond me. Honestly, they may as well say couture should only be worn by mermaids.

Related: Iris Apfel: ‘People like me because I’m different’

Which brings me to Iris Apfel, the 93-year-old fashion icon and designer, who worked for more than 40 years, with her equally impressive husband Carl, now 101, looking after the White House. Apfel is currently celebrated in the lovely documentary, Iris, directed by Albert Maysles, which I honestly could not recommend more strongly. If I had the space, I’d talk about the film and Apfel all day, but the point is that what the film shows most strongly is not just how brilliant fashion looks on older women, and how it’s older women who generally have the best sense of style, because they know themselves so well, but how much they are patronised by the rest of the world, and not just the fashion industry. Repeatedly, we see people talking to Apfel as if she were a child, which is how older people generally are treated by all of us. Yet the fact is that Apfel on a bad day is sharper than pretty much anyone on a good day and this condescension is as ridiculous as the fashion industry treating age like a disease that needs curing. But only criticising fashion for doing this is to be wilfully blind. The scary thing about the fashion industry is that, in a horrible way, it holds up a mirror to the faults within far too many of us.