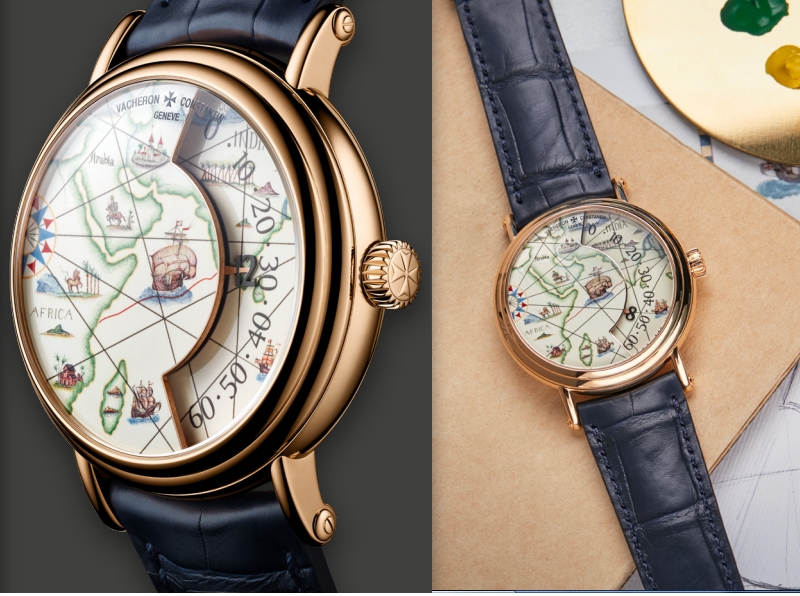 Swiss luxury watch and clock manufacturer Vacheron Constantin explores an exhilarating page of history with the Métiers d’Art Tribute to great explorers’ watch collection, available in a series of three ten-piece limited editions. In the wake of Magellan, Zheng Hé, Christopher Columbus and Marco Polo, to whom the Manufacture had already paid tribute in 2004 and 2008, comes the turn of Bartolomeu Dias, Vasco da Gama and Pedro Álvares Cabral to be honoured through extraordinary compositions enhanced by talented master artisans. To celebrate the discoveries made by these three 15th century Portuguese navigators, the Maison has opted for Grand Feu enamel and the technique of miniature painting. Masterpieces of patience and meticulous care, each of the three dials represents part of a map from the 1519 Miller Atlas, of which a reproduction is kept in Portuguese Maritime Museum (Museu de Marinha – Lisbon).

In order to provide abundant expressive scope for the enameller, these models beat to the rhythm of the 1120 AT self-winding movement, driving an off-centre time display thanks to a satellite hours module. 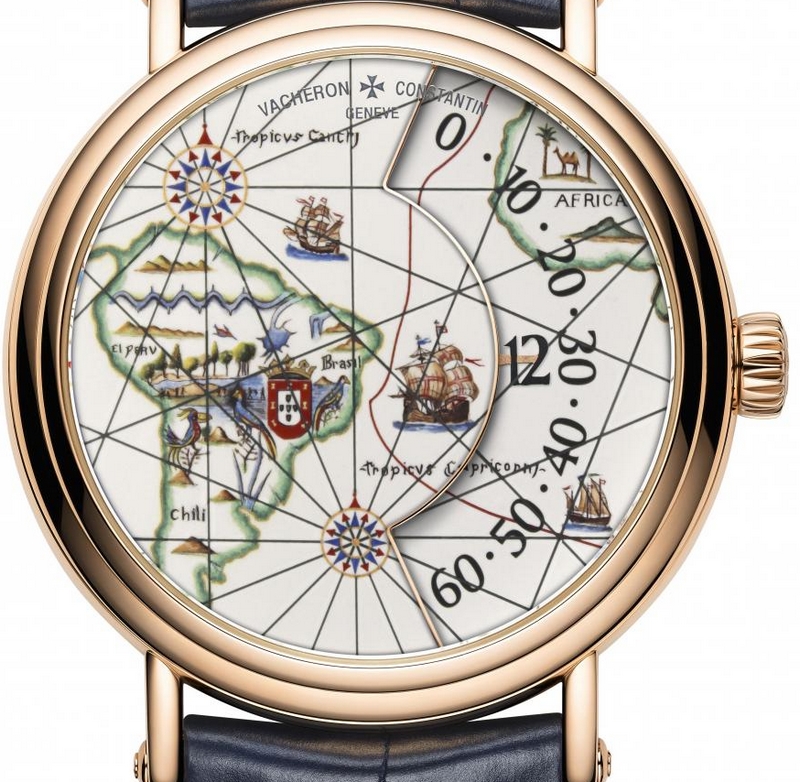 It is to this Portuguese aristocrat and explorer that we owe the discovery of Brazil in 1500. Pedro Álvares Cabral (1467 -1520) was commissioned by King Manuel I of Portugal to travel to the Indies to continue the work of Vasco da Gama, but he took a very different route from his contemporary. Rather than sailing along the African coast to the southern tip of Africa, the fleet led by Pedro Álvares Cabral headed west, until they discovered a new world, Brazil.
This route is depicted by a red enamel line standing out against a beige enamel background punctuated by extremely
faithful representations of the elements present on the map of the Miller Atlas. In the centre of the dial, a ship from Pedro Álvares Cabral’s fleet, sails buffeted by the wind, proudly cleaves the sea in an extraordinarily lifelike manner.
The accuracy of the craftsmanship is also expressed in the shimmering feathers of the birds as well as in the depiction of human figures on the South American continent. 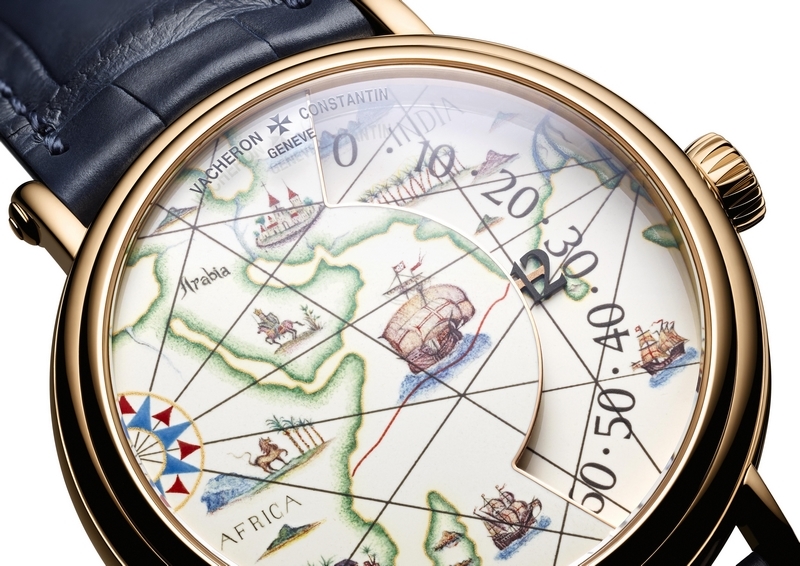 The long journey that took him from Portugal to the coasts of India was one of the most important 15th century
discoveries. The Portuguese explorer Vasco da Gama (1469 –1524), who left his native country in 1497, was the first to travel from Europe and Asia by sea, following an epic and often hellish journey across the Atlantic and Indian Oceans. After circumnavigating the southern tip of Africa, his fleet of four ships sailed along the coast as far as Kenya before embarking on a crossing towards the Indies, which he reached in 1498.

The sea route taken by its crew is finely traced in red enamel on the dial, each detail of which is a very faithful
reproduction of the map appearing in the Miller Atlas. The gaze will naturally be drawn to a ship from Vasco da Gama’s fleet in the dial centre, sails billowing on a stormy sea; or to the circumference of the wind rose and the continents enhanced with gold-coloured enamel powder.

If his crews had not convinced him to give up on continuing the journey beyond the southern tip of Africa, perhaps
Bartolomeu Dias (1450 – 1500) would have been the first to reach the Indies. The illustrious Portuguese explorer
made history in a different way, by discovering the Cape of Good Hope in 1488, paving the way for future expeditions. Bartolomeu Dias was also a member of the crew of Vasco da Gama, who led his fleet to Indies between 1497 and 1498.

The route taken by Bartolomeu Dias’ ships in 1488 is represented by a red line on the Grand Feu enamel dial,
enhanced by numerous incredibly refined details. With the help of a magnifying glass, a close look will reveal the
silhouette of the men composing the explorer’s crew on board the two ships sailing west of Africa; or the palette of shades used by the enameller to precisely reproduce the landscapes, fauna and flora as they are represented on the map of the Miller Atlas. 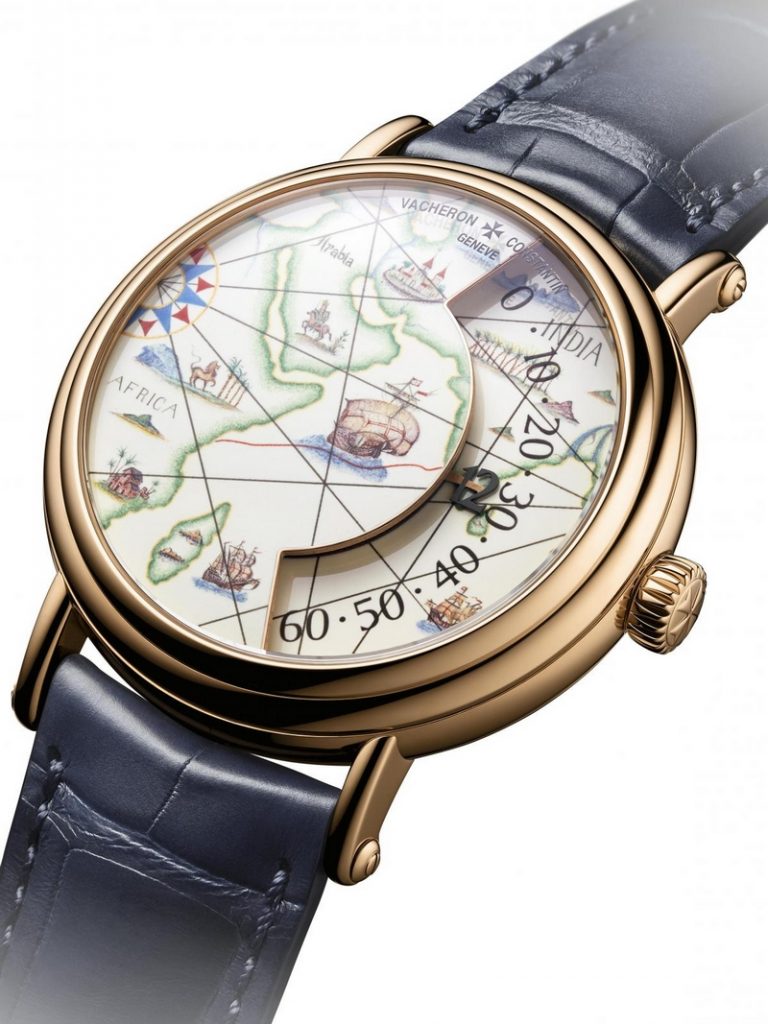