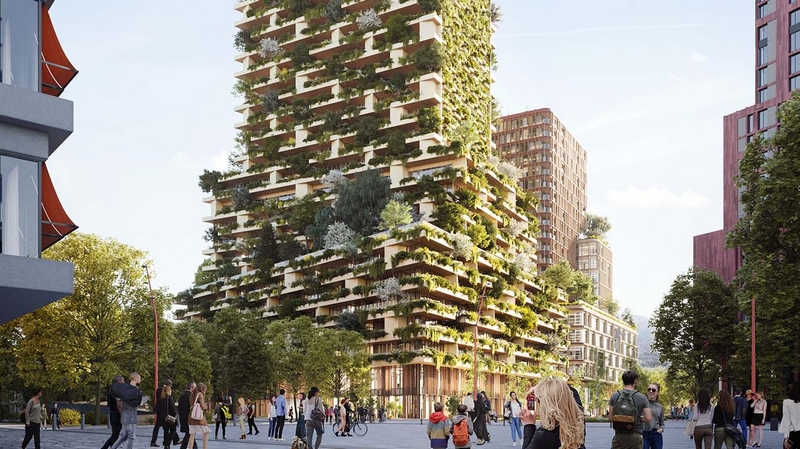 Stefano Boeri Architetti won the competition for the development of the Jaarbeursboulevard area, close to Utrecht Station in Utrecht, with the a new-generation Vertical Forest, part of the Woonderwoods project. @stefanoboeriarchitetti.net/

This article titled “Utrecht rooftops to be ‘greened’ with plants and mosses in new plan” was written by Daniel Boffey in Brussels, for The Guardian on Friday 27th March 2020 14.02 UTC

Every roof in the city district of Utrecht is to be “greened” with plants and mosses or have solar panels installed under plans driven by the success of a similar scheme for the municipality’s bus stops.

The “no roofs unused” policy is part of an attempt to reinvigorate biodiversity in the city and create a less stressful and happier environment, of which the construction of a so-called “vertical forest tower with 10,000 plants on its facade is set to become a leading example.

Related: ‘Forest cities’: the radical plan to save China from air pollution

More generally, a plan set to be agreed by the city council next September will introduce an obligation to green the roofs of all the buildings in the city district. The municipality already runs an oversubscribed grant scheme to cover 50% of the costs for homeowners who want to green their roofs, up to a maximum of €20,000 (£17,900) per application.

Alderman Kees Diepeveen said: “In this city district every roof will be either used for green or for solar panels. It will be that when you look at the different heights, the lower rooftops will be mainly green and the higher ones will be mainly solar panels. And now again a combination of the two because solar panels need some cooling.

“The green can offer the cooling for the solar panels to function properly. It will be a regulation: all roofs are used.”

Utrecht, the fastest growing city in the Netherlands, was rated in a 2019 study by Natuur & Milieu as the most “sustainable” in the country in terms of buying green electricity, its use of environmental zones, exploitation of solar power and encouragement of cycling.

The municipality completed the installation of green roofs on its 316 bus stops last year, capturing fine particles of air pollution, storing rainwater, and providing cooling during the summer months.

The bus stops roofs are planted with sedum, a plant with small yellow flowers in the summer months, draws birds, bees and butterflies. The bus stops, fitted with bamboo benches, feature energy-efficient LED lighting and 96 of them have been outfitted with solar panels.

The bases of the shelters are made of recycled concrete and the municipality says the maintenance will be carried out solely by electric vehicles. The city, the fourth largest in the Netherlands, plans to use “completely clean public transport” by 2028 with the electricity used to power the buses being produced by Dutch windmills.

The 300ft-high Utrecht vertical forest, a landmark building in the newly greened city centre, will comprise 200 apartments. Its facade, roof and balconies will be filled with around half the trees and shrubs presently found in Central Park in New York.

Its developers claim it will absorb about 5.4 tonnes of carbon dioxide emissions a year and produce about 41 tonnes of oxygen, equivalent to that generated by a hectare of forest.