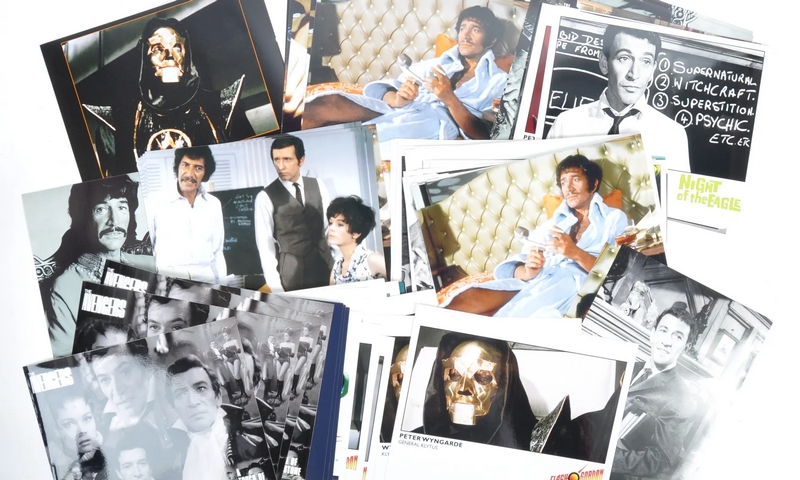 Collection of promotional photographs of Peter Wyngarde from his many television and film roles. Photograph: East Bristol Auctions

This article titled “Peter Wyngarde memorabilia snapped up at auction” was written by Steven Morris, for theguardian.com on Thursday 26th March 2020 17.35 UTC

The items were among a trove of memorabilia that belonged to the late cult star Peter Wyngarde, who played the bushily moustached King from 1969 to 1971.

In 1970 Wyngarde was declared Britain’s best-dressed male personality and new parents across the nation named their children Jason after his character. His look became something of a national joke as fashions changed and Wyngarde’s star waned. Mike Myers has said King was an inspiration for Austin Powers.

Wyngarde died in 2018 aged approximately 90 – his life story is shrouded in mystery – and more than 250 items were auctioned online by East Bristol Auctions.

The auction turned out to be a “white glove sale”, when every lot goes. Unusually, there were no bidders from overseas, but several unnamed British actors and pop stars snapped up pieces.

Wyngarde’s “best-dressed personality 1970” trophy attracted the keenest bidding, selling for £2,200. He beat Cliff Richard and George Best to the award that year.

A mirror in the form of King in psychedelic duo-tone pattern was sold for £420. The actor’s personal teddy bear went for £700.

A number of vintage scarves that Wyngarde wore as King were on offer, as were plenty of sunglasses and a pair of cowboy boots crafted by the century-old Mallorcan company Tony Mora.

An original vintage Medico Medalist smoking tobacco pipe, which the catalogue said was “very likely a prop that Wyngarde used”, was also up for grabs.

A signed photo from Vivien Leigh went under the hammer, as did a costume necklace that Wyngarde wore in the Lenny Henry Show blaxploitation movie sketch Nathan Gunn in the 1990s.

Wyngarde also had some rare Beatles memorabilia, including an original poster from the band’s Abergavenny Town Hall Ballroom performance in 1963.

Another intriguing item was described as “an incredible set of believed unheard Robin Gibb song lyrics, presumed to have been written for actor Peter Wyngarde”. The song in question, I Will Surrender, comes with the note: “Words and music by Robin Gibb, 1970.”

Wyngarde went on to play the chief of the secret police, Klytus, in the 1980 movie Flash Gordon, and the silk neckscarf he wore at the New York premiere was up for sale, as was a guitar apparently signed by Freddie Mercury. Queen performed the film’s title track.

By the time he appeared in Flash Gordon, Wyngarde had been through difficult times. In 1975, he was found guilty of gross indecency in a bus station toilet. Newspapers reported that he was summoned under his real name of Cyril Louis Goldbert. A tabloid later reported that his mop of hair was thinning and covered in a flat cap.

Poignantly, an “original vintage Ray Marston Wig Studio-made wig/toupee” was on sale. The catalogue said: “The toupee of usual form, with a fine mesh base. Supplied within its original box, addressed to Wyngarde at his personal residence. A rare item from the Peter Wyngarde estate.” It went for £170.