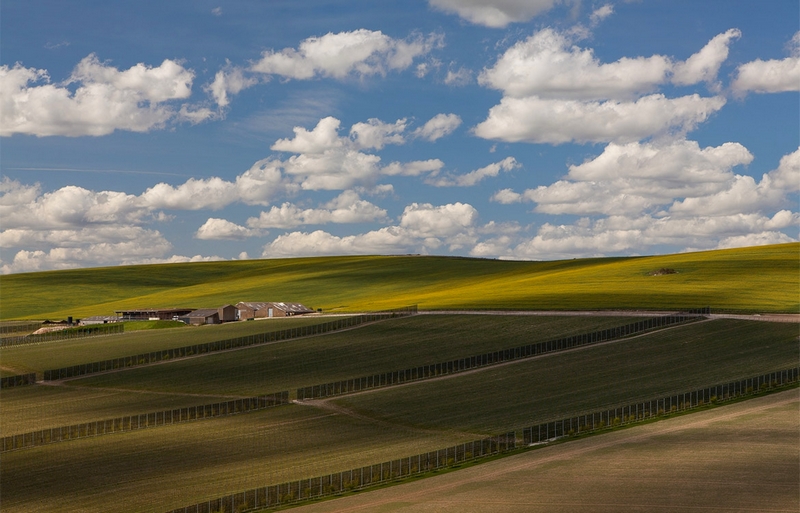 This article titled “Top 10 vineyard stays in the UK and Europe – to visit by train” was written by Holly Tuppen, for The Guardian on Tuesday 3rd September 2019 05.30 UTC

Rathfinny Estate’s 242 hectares (600 acres) of south-facing chalk downland is one of the finest sparkling wine-producing spots in the UK. And owners Sarah and Mark Driver are not short of ambition: their winery can produce more than one million bottles of Sussex sparkling wine each year and they plan to become one of the largest vineyards in Europe.

The estate’s recently renovated Flint Barns offer a laid-back country retreat surrounded by the South Downs. Snug nooks with fireplaces, a communal dining room and tables in the pretty courtyard make the restaurant appealing year-round, and substantial walking trails help to burn off the excess. The estate is four miles (10 minutes by taxi) from Seaford station on the line east from Brighton.
• Flint Barns doubles from £100 B&B, rathfinnyestate.com

The UK’s most northerly commercial vineyard is six miles from Malton station, which connects with Liverpool and Scarborough on the TransPennine route. Malton itself is among Yorkshire’s top foodie destinations and holds its harvest festival with star chefs, live music and the full works on 7-8 September. At Ryedale, two farmhouse rooms overlook nearly 2½ hectares of vines, which roll down the south-facing slopes of the Wolds. Since 2011, the vineyard (including a second site at nearby Howsham) has produced sparkling wine, reds and whites using 16 grape varieties. A pure pinot noir wine is ready for launch this autumn, probably the first time such a tipple has been produced so far north in the UK. A low-impact farming approach is taken with natural pesticides used where possible; wild boundaries and hedgerows are maintained so guests can enjoy a wide range of flora and fauna. Alongside the award-winning wines, a heritage orchard produces cider and apple juice, and a beer venture is under way. Day tours are also available, which culminate in a local wine and cheese tasting.
• Doubles from £95 B&B, ryedalevineyards.co.uk

By a nature-filled spot on the River Dart sits Sharpham House, an austere looking mansion surrounded by ancient oaks and lush vines. Some of the UK’s most highly regarded wines, including sparkling whites, rosés, a pinot gris and pinot noir comes from Sharpham and can be sampled along with its traditionally produced cheeses during tasting sessions, tours or in the Alfresco kitchen café. The Sharpham Trust runs a low-key campsite in nearby Point Field where tents sit a few metres from the river. Seals sometimes wallow in the brackish water and curlews scour muddy banks. The best way to get from Totnes station to Sharpham is on a three-mile footpath, which is accessible by foot or bike.
• Camping in Point Field £7pp, children under five free, sharphamtrust.org

This organic farm in the foothills of Somerset’s Quantocks is within five miles of Bridgwater station and offers a non-conventional mix of alpacas, Christmas trees, glamping and wine-making. The latter is a draw for campers, who get the chance to tour the vines and learn about Secret Valley’s five varieties of grape – pinot noir, rondo, orion, solaris and reichensteiner. The first crop was produced in 2010, 10 years after the farm went organic. The activity centre, animals and range of camping options make this a top spot for families. There are wigwams and bell tents for groups but the more romantic shepherd huts are closest to the vineyards.
• Huts sleeping up to four people £145pn, bell tent/yurts/wigwams for two adults from £63.50, lodge for two £73.50. Pitch your own tent from £15pp, secret-valley.co.uk

While meandering around Llanerch’s vineyards overlooking the Vale of Glamorgan, it’s hard to believe that Cardiff’s urban sprawl (and station) is 12 miles away (20 to 25 minutes by taxi). Ryan Davis was similarly taken aback in 2010 when he found the vineyard for sale. Since then, he’s restored the business to recreate some of the magic of Australia’s Margaret River and Marlborough on home turf. The old farmhouse is now a restaurant with rooms, cookery school and wine-tasting hub. Vineyard tours and experiences draw on connections between the landscape and the taste of Cariad (Welsh for love) white wine made with kernling and reichensteiner grapes. Visitors are welcome to get involved in the harvest throughout September.
• Doubles from £115 B&B, llanerch.co.uk

Although more humble than some nearby wine châteaux, this pretty manor house is in a prime location to explore the Bordeaux region. Libourne railway station is five miles down the road (only one change from London St Pancras), and picturesque Saint-Émilion isn’t much further. Fronsac’s 300-year-old vines produce rich, full-bodied reds cared for by a diligent father-and-son team, proud of their small-scale, traditional production methods. The Fronsac experience is awash with historical intrigue; from the 17th-century wine barrels to tales of pilgrims heading to Santiago de Compostela on the Camino Francés. To make the most of quiet roads and rolling countryside, bring bikes to pedal between world-famous vineyards with their rich, full-bodied reds and chateaus. Maps and advice are available on arrival.
• Doubles from £80 B&B, lacloseriedefronsac.com

Languedoc-Roussillon (consumed by the Occitanie region in 2016) rivals Provence for its charming concoction of hilltop villages, sandy shores and rolling vineyards. With almost three times as many vineyards as Bordeaux and fast trains from Paris, it suits oenophiles seeking balmy climes. Domaine de Saint-Jean (20 minutes by taxi from Narbonne station) is a serene spot in the heart of Corbières, one of France’s most productive red and rosé appellation d’origine contrôlées, close to the 900-year-old vineyard at Abbaye de Fontfroide. Martine and Didier welcome guests to four rooms in their rural idyll; Victorine has a private terrace overlooking the vineyards.
• From £70 B&B, domaine-de-saint-jean.com

The north-eastern region of Alsace is an interesting alternative to France’s southern vineyards. The Alsace wine route weaves just west of the Rhine River, passing vineyards, forests and dramatic castles along the way. Working farm Le Vieux Pressoir is on the wine route in Dieffenthal, six miles from Sélestat’s historic centre and station (one of the oldest in France, opening in 1840). The towers of Haut-Koenigsbourg Castle rise 800 metres above the otherwise unassuming village where Le Vieux’s self-catering farmhouses offer a comfortable base. Accommodation ranges from a gîte sleeping eight to a studio apartment; the whole place can be taken exclusively, too. Owners Aurélie and Damien know the surrounding vineyards well and are always happy to point guests in the direction of family-run wineries nearby.
• Doubles from £40 B&B, half board options available, two-night minimum stay may apply, gite-vieux-pressoir.fr

Marius and Maryyonne welcome guests to their homely Loire château surrounded by ancient vineyards and rolling countryside, five miles from Amboise station with its connections to Paris, Tours and Orléans. Although the opulent châteaux of Chenonceau and Villandry are close by, it’s easy to while away the days staying put at Pintray. Maryyonne is responsible for the characterful gîte, filled with brocante finds and family portraits, while Marius’ domain is the wine. Across the pretty courtyard, the winery and cave have been part of the AOC of Montlouis-sur-Loire since 1937, although the enormous rotary wine press dates back to the 17th century. Established originally by monks, it’s thought that Henry IV would have once enjoyed the fruits of these vines. Today, Marius leads tours and tastings extolling the virtues of the dry and medium-sweet wines.
• Doubles from £115 B&B, sawdays.co.uk, chateau-de-pintray.com

Close to Lausanne central railway station, with its frequent links to Geneva and beyond, LakeView Hotel le Rivage is almost on Lake Geneva and looks up at the Unesco-listed Lavaux vineyard terraces, which tumble down to the water. Families have cultivated this mosaic of steep vineyards covering 800 hectares since the 11th century. LakeView Hotel provides guests with bikes to ride to the vineyards but they are easy to explore on foot, too, with a lattice of interesting paths to follow. There’s an educational walking trail between Lausanne and Montreux, electric buggy tours and the Lavaux Express wine train. The steep south-facing slope makes it impossible to harvest the grapes by machine, so during autumn, there are opportunities for volunteers to get involved in picking by hand. The May to December Lausanne à Table food festival celebrates the pairing of predominantly Chasselas local white wine and food throughout the city.
• Rooms from £100, breakfast from £12, rivagelutry.ch