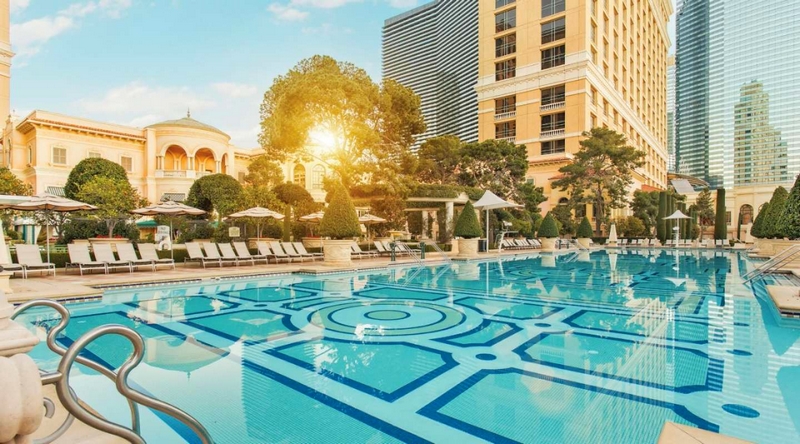 This article titled “The hellish future of Las Vegas in the climate crisis: ‘a place where we never go outside'” was written by Dan Hernandez in Las Vegas, for theguardian.com on Tuesday 3rd September 2019 05.00 UTC

The Clark county death investigator Jill Roberts vividly recalls the sunny 115F (46C) afternoon last summer when she entered a Las Vegas home with no functional air conditioning. The indoor heat felt even worse than the broiling temperature outside. She climbed up the stairs, through thick, stifling air, landing in a third-story bedroom where the resident had died in sweltering conditions. The room had no fan and the door was shut. It felt as if it couldn’t get any hotter.

“Our elements are unforgiving. Especially on those 115F days, it doesn’t take a lot,” Roberts told the Guardian. “In that situation I’ll go stand in the sun in the 115F heat to do my paperwork as opposed to staying in the house because it’s that hot.”

The coroner’s office in Clark county, which encompasses Las Vegas, often records heat as a contributing factor to accidental deaths. There are hikers succumbing to lethal temperatures in the surrounding desert and heat-related deaths in cars and homes when occupants forgo cooling. Roberts has seen homeless people with post-mortem burns from collapsing on hot streets.

And it will get worse. Las Vegas is the fastest warming city in the United States, its temperatures having risen 5.76F since 1970. A June study of coroner data by the Las Vegas-based Desert Research Institute found a correlation between heat waves and heat-related deaths in southern Nevada, both of which, they say, are on the rise. And a recent Union of Concerned Scientists (UCS) report warns that without global action to reduce carbon emissions, the city will likely experience 96 days of heat above 100F by the end of the century, including 60 days over 105F, and 7 “off the chart” days that would break the current heat index.

Every city has its own challenges in adapting to climate change, even those that are supposedly accustomed to severe heat. In Las Vegas, a laissez-faire attitude toward growth has allowed high temperatures to become even more deadly, and the scorching heat now threatens the city’s basic functionality.

Like the tourist guzzling alcohol by the resort pool, smiling and flirting until he faints from dehydration, southern Nevada has welcomed unfettered development since the 1930s – the advent of the home cooling era – when its population began to double in size nearly every decade despite limited water resources and increased drought. The resorts have long been the economic driver. Over a third of the area’s workforce is supported by the 40 million visitors a year who descend on their gargantuan hotel towers, bustling casinos and massive convention halls. And as tourism grows, so does the population.

During the boom years before the 2008 housing crisis, hundreds of miles of desert landscape were paved over with heat-absorbing asphalt and concrete, worsening a “heat island” effect in the cauldron-like valley. Outward growth also led to vehicles motoring further across the sprawling metropolis, increasing heat-trapping carbon emissions.

Now, with growth having continued each year since 2011, and new home developments returning to boom-era levels, Sin City is reckoning with a future that looks downright hellish.

“The thing about Vegas is, we always do feast and famine,” said Tick Segerblom, a former state senator who now sits on the Clark county commission, which governs the Las Vegas Valley. “We never bother to say, ‘Where are going? What are we doing?’”

During summer months, when Las Vegas city buses break down notoriously often, many pedestrians carry umbrellas to protect their skin, and those without cover often “shadow walk”, following the shade of palm trees, signs and buildings to avoid direct exposure to a sunshine that can cause humans to overheat.

The city’s poorest residents are most at risk. Fans and cooling systems can save lives, said Jill Roberts, the coroner office investigator, “but some people just don’t have the funds to fix their air conditioning or have working equipment.”

Hundreds of homeless people living in the city choose to camp in storm drains rather than sleep above ground – another dystopian irony to the city’s reputation for glitz and glamor. Those who dislike the tunnels often have to work hard to stay cool. Marcy Averett, 49, and her husband spend 15 hours a day collecting recyclables. But each day before they set off, they buy ice.

“I have to have cold water. I don’t know how people do it with hot water,” she told the Guardian on an August afternoon as she dragged a shopping cart filled with aluminum cans out of the blistering sun, into the shade of a highway overpass. An orange cooler hung from the side of her cart. Averett had a spray bottle to mist her face and neck, and applied lip balm as we spoke. “I put medicated moisturizer on my lips constantly, all day every day, and my lips are still cracked. It’s this heat.”

Like many other rapidly warming cities across the United States, Vegas has only recently begun to reckon with its future.

“The real question is, do we want a place where we just go from our houses to our cars to our offices, and never go outside because it’s too hot?” Segerblom, the former state senator, asked. “How many months of the year is that tenable?”

Rachel Licker of the Union of Concerned Scientists warned that southern Nevada’s productivity and essential services will become increasingly stressed as temperatures rise – construction projects will slow or stop more frequently to ensure worker safety; police and postal workers may be impacted; and since studies show school children perform worse as temperatures rise, teachers may need to adjust testing schedules and standards for days if not months at a time.

Meanwhile, power surges may become more common if increased demand overwhelms electrical grids, leaving the people most sensitive to heat illness such as children and the elderly without a cooling system when it’s needed most.

“Even though people in Las Vegas might be used to high levels of heat, it’s going to get even hotter, and we don’t know how much they’re going to be able to withstand,” Licker said.

As Las Vegas Valley reaches its limits, many in the community believe now is an opportune time to contemplate the future of the city. “What do we want to be when we grow up?” said Segerblom. “Is there a way to manage this valley that’s good for the quality of life of the citizens of Nevada, not just for the tourists and hotels?”

He noted that while state and federal policies get the most media attention, municipal governments can impact the environment just as well. Planting more native trees and shrubs, enforcing energy-efficient building standards, zoning to promote upward rather than outward growth, and developing alternatives to blacktop roads and concrete sidewalks are all policies that could have a major impact.

To lessen its own carbon footprint, the city of Las Vegas already began powering all government buildings and streetlights with renewable energy in 2016. The state’s largest energy consumers, the multi-thousand room hotels and casinos on the strip, have also made environmental sustainability a priority in recent years. MGM Resorts has over 20 acres of solar panels atop the Mandalay Bay convention center, and much of the electricity flowing through properties like the Bellagio, Luxor and New York, New York comes from a solar array in the Mojave Desert.

For their part, Nevada voters passed a ballot initiative requiring state utilities to get 50% of their electricity from renewable sources by 2030. As a constitutional amendment, the proposal needs to pass a second time to take effect. But state lawmakers made that vote moot by adopting the standards on their own, on Earth Day 2019, through a legislative bill that received unanimous support. Nevada is rare state now in which reducing carbon emissions has become a bipartisan concern.

In seeking more access to clean energy sources, the state hopes to get ahead of the dilemma posed by longer and more intensive air conditioning seasons that amount to more greenhouse gas emissions spewed into the air.

“Heat is currently the top killer for weather-related hazards in the United States,” said Licker. “Those kinds of numbers would just get worse if we’re headed toward really significant climate change.”