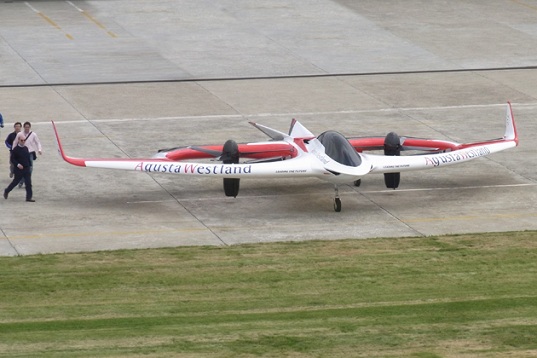 It is conceived to hover like a helicopter and to perform forward flight like an airplane. It is called Project Zero and it represents the world’s first electric tilt-rotor aircraft.

“Project Zero” tilt rotor technology demonstrator, the brainchild of the Anglo-Italian helicopter company AgustaWestland, is completely electric powered; designed to hover like a helicopter and convert to a fixed wing aircraft in forward flight thanks to its two integrated rotors which can be tilted through more than 90 degrees. The demonstrator performed its first unmanned tethered flight in June 2011 at AgustaWestland’s Cascina Costa facility in Italy and has since performed untethered hovering flights inside a secured area.

The demonstrator’s rotors are driven by advanced electric motors powered by rechargeable batteries; future hybrid solutions have also been investigated using a diesel engine to drive a generator. All of the aircraft control systems, flight control and landing gear actuators are electrically powered, removing the need for any hydraulic system, said the manufacturer of Project Zero.

“The ‘Project Zero’ technology demonstrator program brings together many of the advanced technologies AgustaWestland has been researching in recent years and demonstrates our strong technological base from which we will develop new products to meet the needs of our customers in the future. We strongly believe in the tilt rotor concept as the future of high speed rotorcraft flight as it offers much greater speed and range than compound helicopter technology,” said Daniele Romiti, AgustaWestland’s CEO.

“This is a wonderful achievement of the AgustaWestland Advanced Concepts Group. A team of passionate and brilliant engineers worked extremely hard in a secure facility to conceive, design, build and test this technology demonstrator in an exceptionally short period of time,” said Dr. James Wang, Vice President of Research and Technology at AgustaWestland. “This group lives to dream, and if it can be dreamed, it can be built. The team did not just build an electric powered airplane or helicopter; that would have been too easy. They went all out and built a twin rotor electric tiltrotor with no transmission or swashplates.”

‘Project Zero’ has been designed with detachable outer wings for missions that will be performed primarily in helicopter mode. 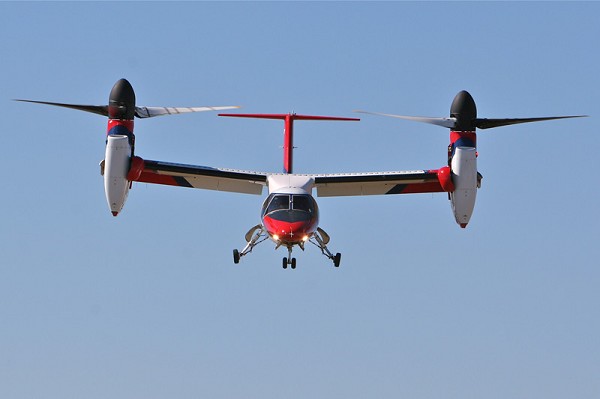