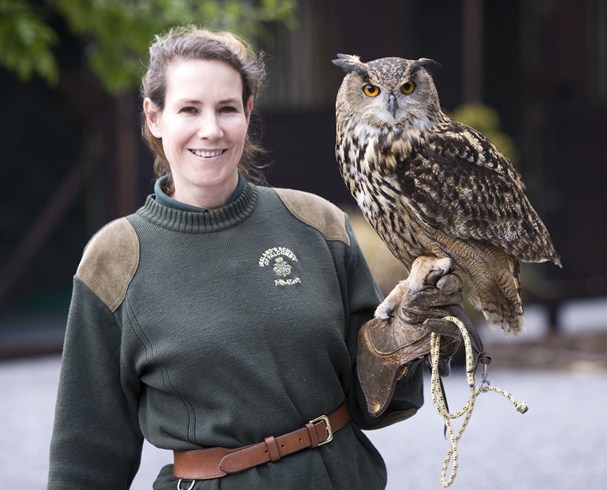 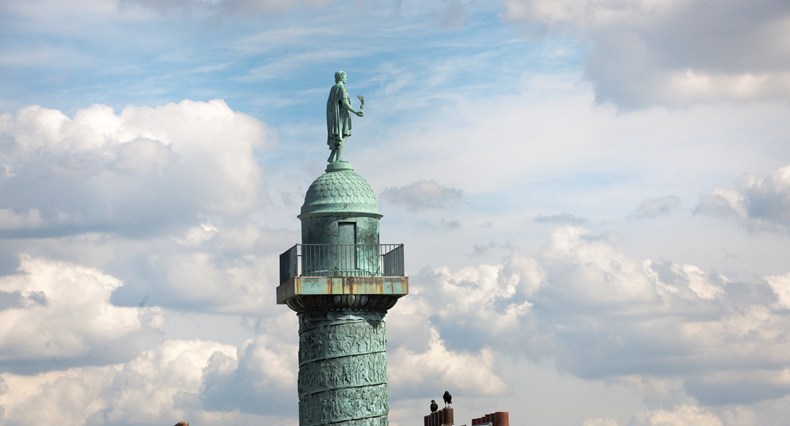 The films are well-known, and the hotels that played key roles in the production of those films – as settings and inspirations – are also famous and beloved. But the inside stories of what went on behind the scenes at the hotels while the movies were being produced can make for some interesting tales all their own. Quiet on the set – it’s time to go behind the scenes of Leading Hotels in the movies: 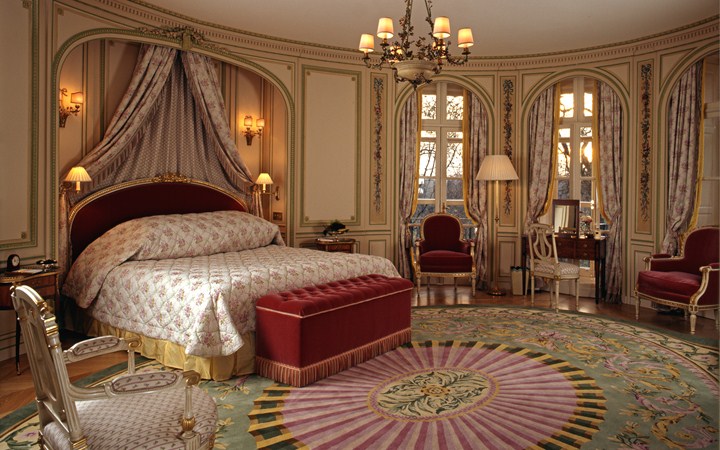 The filmmakers felt that since The Ritz is a quintessentially British icon, it would be instantly recognizable internationally. Filming took place outside, at the hall porter’s desk, the main entry staircase, a guest floor corridor, and in the Trafalgar Suite. In a scene where Will runs up to the hall porter’s desk to ask to see Anna, the large mirror hanging across from the desk had to be covered up to avoid reflections of the crew. Stars Roberts and Grant stayed at the hotel during the shoot, and though most guests and staff in the final cut were actors, two Ritz employees did make on-screen appearances: night porter Ray Leverett, and head hall porter Michael De Cozar. With more than 30 years at the hotel, De Cozar is well-known by regular guests, and when the film was released he received hundreds of congratulatory messages from around the world. One side note still elicits laughter:

At the time, there were just three phones at the front desk, and to accommodate the shoot the hotel had diverted all but one line
to other areas. Thanks to a persistent guest who first rang to change his tea time, then again to ask for Underground directions
to Harrods, then about the bus line to Harrods, then for the price of a taxi to Harrods, the scene took 14 takes to complete! 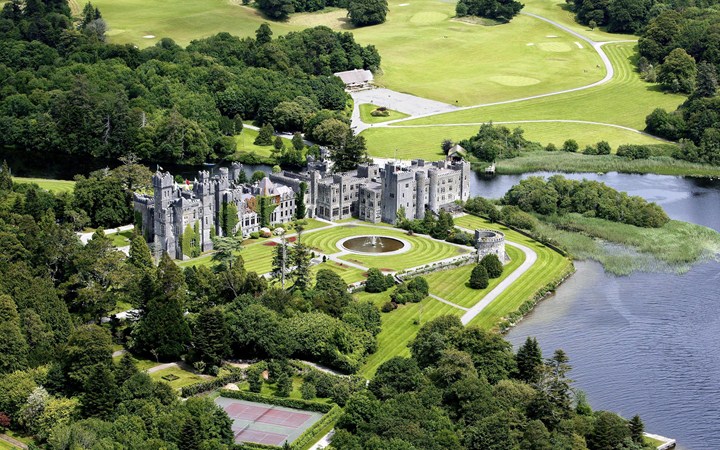 The Quiet Man – Retired boxer Sean Thornton (John Wayne) returns from America to the Irish village where he was born. His courtship with fiery local lass, Mary Kate (Maureen O’Hara), sets off a chain of unexpected and colorful events.Director John Ford, who had Irish roots, enlisted the help of local Lord Killian to find the outdoor locations for filming, which took place in various spots across western Ireland. (Interiors were shot on Hollywood sets.) As Ashford was a favorite of the Lord’s, many parts of the property were used in the film: the stone bridge leading to the hotel can be seen at the opening of the movie, and several scenes, including the famous climactic fight sequence, were shot on the lush Castle grounds. None of the interiors of the Castle were used, but the cast and many of the 80-plus crew did stay at the hotel, with John Wayne bunking in Room 500 and Maureen O’Hara checking in to Room 408. The village of Cong also served as a main backdrop in the film. At the time, electricity lines had not yet reached Cong, whose residents still used candlelight and oil-burners. Given the need for power to make his film, Ford spearheaded efforts to get the town outfitted for both electricity and telephones. With post-war rationing still lingering, Ford also had special soda bread brought in for those involved in the movie. In 2011, O’Hara returned for a celebration honoring the film’s 60th anniversary. In addition to attending special screenings, the venerable actress also checked back in to Room 408. 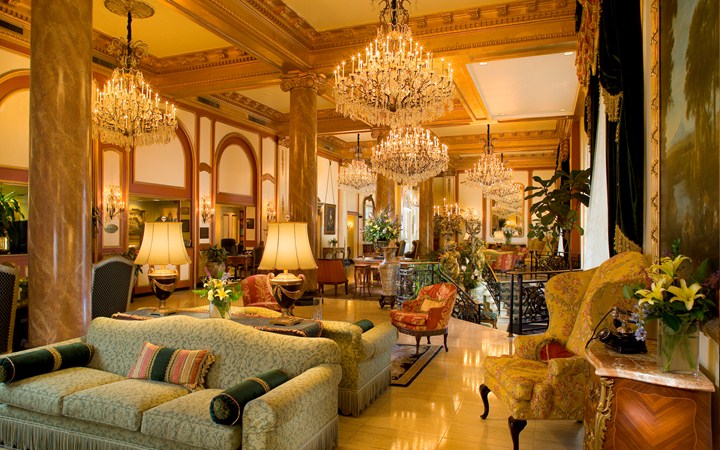 Lee Daniels’ The Butler– This film is based on the life of Eugene Allen, who served as a White House butler and maitre d’ for more than 30 years. Renamed Cecil Gaines for the film, and played by Forest Whitaker, he was a witness to American history, from the civil rights movement era to the election of the first African-American president.

Built in 1905, Le Pavillon Hotel in New Orleans, has hosted many shoots over the years; its lobby has stood in for a party room at
an English castle, event spaces became a nightclub for vampires, and Blackhawk helicopters have hovered over its swimming pool, as
actors appeared to parachute off an aircraft. For Lee Daniels’ The Butler, filming took place over four days in two main locations. The Gallery Lounge was transformed into a 1950’s-era gentleman’s club where the character Gaines worked before going to the White House. As cigar smoking was common at the time in these types of clubs, the filmmakers had to hire a company that specializes in extracting smoke to clear the air as they filmed. The lobby was used for an elegant party scene, with dozens of actors in formal garb descending the Grand Stairway. One side story associated with the filming took place before shooting even began. When director Lee Daniels was scouting locations, he spotted the hotel’s Chef Pat and immediately told her he wanted her in his movie. Chef Pat replied that as she did not drive, if he wanted her in his movie, he would have to send a car. So Daniels sent his sister, who picked up Chef Pat for the wardrobe fittings and the filming. (The Chef’s scenes were shot at another location in the city, not at the hotel, and featured actress Vanessa Redgrave.) While Chef Pat enjoyed being part of the film, she prefers cooking for Le Pavillon Hotel guests and going to bed early – the filming took place all night! 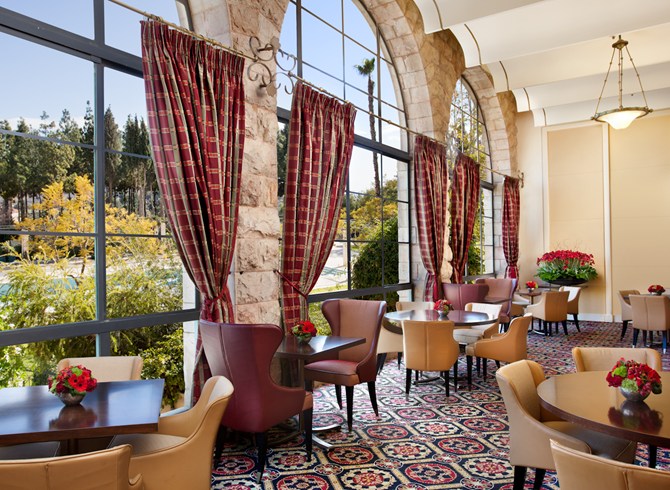 Exodus – Based on the true story of the Exodus, a ship seized by the British Royal Navy as it was carrying Jewish emigrants to the homeland, the film deals with the founding of the state of Israel, and tells the complicated love story of American nurse Kitty Fremont (Eva-Marie Saint) and rebel Palestinian-Jew, Ari Ben Canaan (Paul Newman).

Connections between The King David in Jerusalem and this story run deep. In 1946, when the film is set, the hotel housed the headquarters of the British forces and governmental authorities of Palestine. It was here that the underground militant group, Irgun, placed a bomb that killed 91 people. (In the movie, Ari Ben Canaan is a member of this group, and the bombing is part of the storyline.) When director Otto Preminger visited to scout locations, he met staff member Avraham Weiner who, like the director, is of Austro-Hungarian origins. Mr. Weiner was in the same refugee camp as the expatriates from the Exodus, and was able to provide invaluable insight to the filmmakers. He worked at the hotel from 1953 to 1991, and still vividly remembers the shoot. Mr. Weiner appears as the barman in the scene where Kitty and Ari meet on a terrace overlooking the Old City. Other locations used included the reading room, for a scene in which Ben Canaan receives a message from the Irgun; and the basement hallway, for scenes relating to the explosion. Featured in these scenes were three people who actually participated in this historic event. Actor Sal Mineo was once denied entrance to the hotel by a security guard who thought he looked suspicious, and was only allowed in after fellow cast members vouched for him. Paul Newman so loved the sardines served at the hotel breakfast that he asked a bellboy to pick up six tins for him to take back home. 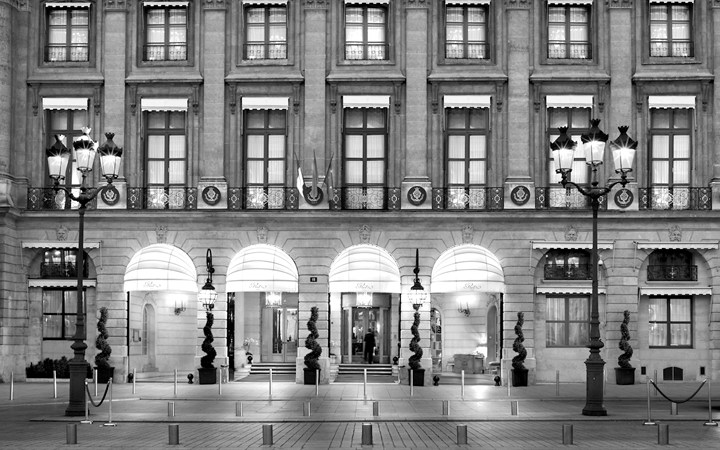 The Da Vinci Code – When the curator of the Louvre is found dead, Robert Langdon (Tom Hanks) gets thrown into the middle of a murder. With the help of the curator’s granddaughter, Sophie Neveu (Audrey Tautou), he becomes entangled in a quest for the murderer and the Holy Grail, finding clues in Da Vinci’s paintings.

As readers of the novel may remember, Ritz Paris is mentioned as the hotel where Professor Langdon is staying, and is featured throughout the book. While it was important to the filmmakers to include it, there was just one issue: the size of the Hollywood production. Headed by director Ron Howard, the crew numbered over 100, and those needed for the interior filming could not all fit into a standard guest room. The hotel offered the use of a larger suite, but Howard was adamant that the character of Langdon — a simple guy — would stay in a smaller room. What to do? Dismantle the room, of course! Based on photos provided by the hotel, the filmmakers asked that over 100 items from Room 512 – from furniture and curtains to the bathrobe and even the taps from the bathroom – be packed and shipped to a film studio in London, where everything was reassembled to recreate that exact room. Filming of a scene in which Langdon is seen leaving his hotel and walking across the Place Vendome took pace one night with the crew closing the square and lining it with prop cars. Tom Hanks had a room at the hotel to use between takes, and the hotel’s front doors had to be kept shut every time the cameras rolled, but guests were too excited to see the filming to mind. 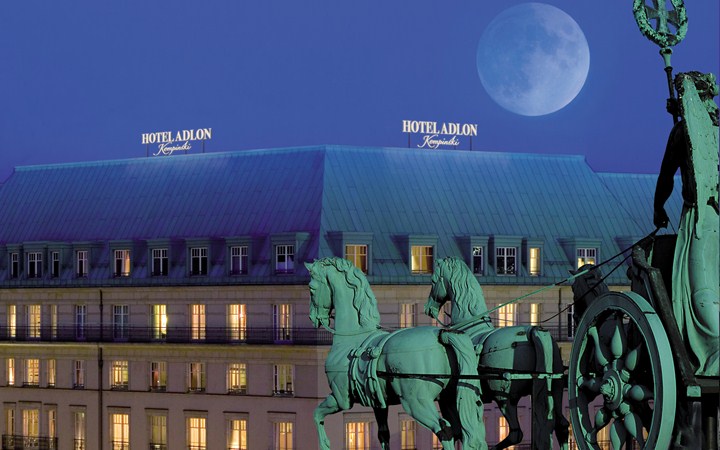 Unknown – This psycho-thriller follows Dr. Martin Harris (Liam Neeson), who, upon waking from a coma finds someone has assumed his identity, enlists the help of a waitress (Diane Kruger) to get his life back, while various forces threaten his safety.

Since the main character’s hotel plays a prominent part in the story, producers chose the Hotel Adlon Kempinski, thanks to its reputation as the city’s leading luxury hotel, and its proximity to Berlin landmarks like the Brandenburg Gate. (One of the producers is also a longtime guest of the hotel, so he had a personal soft spot for the property.) During the 2010 filming, the producers, director and all the main actors stayed on site. Areas featured include the façade, main entrance, lobby, reception, elevator, Quarré restaurant, main staircase, service corridors, stairways, Bel Etage, back entrance and garage. Not only does the hotel appear in the movie, but many employees make appearances on screen as well; in addition to doormen, pages, concierge, waiters, receptionists, bartenders and housekeeping and room service staff, look for butler Ricardo in one scene – he holds an umbrella for Liam Neeson in front of the hotel – and the real hotel manager, is seen greeting a sheikh in the lobby. Given the action-based storyline, there were some challenges during the filming. In one scene depicting an evacuation, there were close to 300 extras gathered in the hotel, while in another critical scene (spoiler alert!), an explosion takes place in the Presidential Suite (this scene was actually safely filmed in a studio.) The production company offered the hotel a team of 20 hostesses to help care for guests during the shoot, and even halted filming to make way for regular guests, ensuring a pleasant experience for all involved. 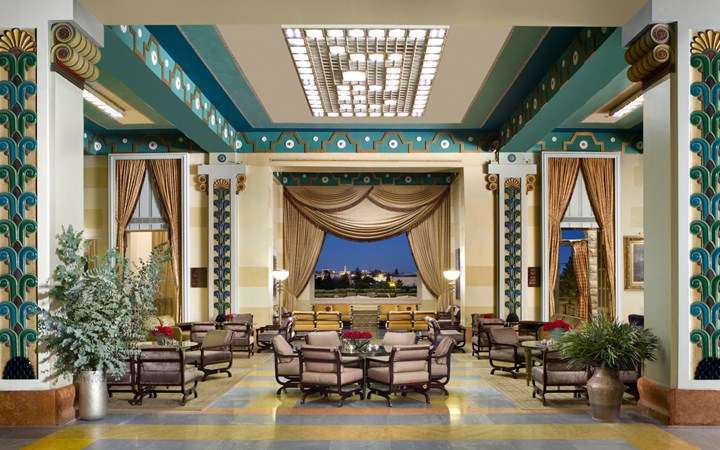