The RIBA Stirling Prize is the UK’s most prestigious architecture prize. What is the building that has made the greatest contribution to the evolution of architecture in the past year. 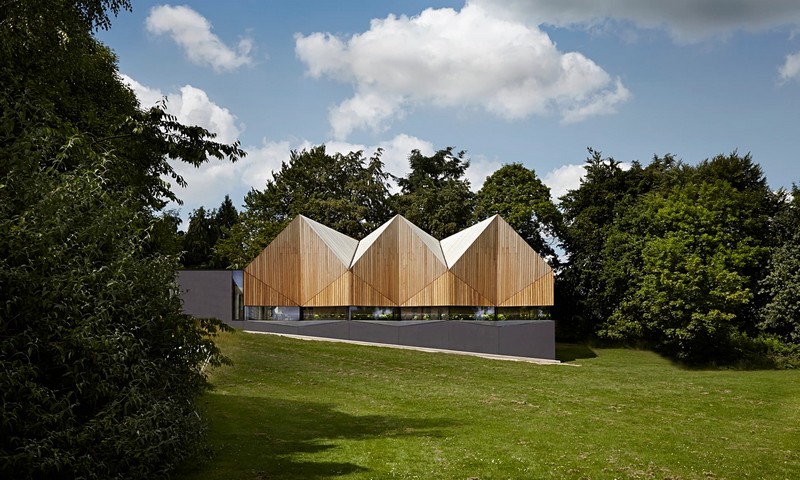 This article titled “The Stirling prize 2015: the virtues of quiet craft” was written by Rowan Moore, for The Observer on Sunday 19th July 2015 06.30 UTC

Sadly, it turns out there are limits to the Observer’s omnipotence. The selectors of the shortlist for this year’s Stirling prize have scandalously ignored the hint dropped last week, that the swimming pool of Alfriston School in Beaconsfield should be included. Which is a shame, as it shows a considerably better understanding of the uses of structure and material to make spaces that serve their users than does the Neo Bankside housing development, which does make the list.

Neo Bankside, a cluster of luxury residential towers next to Tate Modern, has the confident detailing and aesthetic bravura you expect from its architects, Rogers Stirk Harbour + Partners. The lift towers, as usually from this practice, are glassily stylish. The big X-shapes of its cross-bracing have a sort of handsome muscularity. But it has an unfortunate addiction to 45- and 135-degree angles, in plan, section and elevation, that do little but set up painful clashes and awkward corners. The design is assertive and hostile, in a way that makes it hard to imagine any neighbour standing comfortably alongside. It also has the sort of disingenuous “public space” that the Stirling prize should not be encouraging, a fuzz of shrubs at its base that glass gates and conspicuous security discourage you from visiting.

Perhaps Neo Bankside is on the list out of deference to the achievements of its founder, Richard Rogers. Perhaps it was put there by a wish to variegate what might otherwise have been thought an excess of scrupulous, crafted, quietish works in brick and timber. This approach, whose leaders are sometimes called “whisperers” on account of their soft, earnest tones of voice, used to be marginalised by the Stirling prize, but it has done well in recent years. Indeed, through some inscrutable evolution of taste it has become the style of the moment. It doesn’t just get on shortlists, but it is also wielded by the jobbing throwers-up of speculative apartment blocks.

Three of the six entries might loosely be called whispering: the remodelling of the Whitworth Museum in Manchester, the Maggie’s Lanarkshire Cancer Centre, and a block of flats in Darbishire Place in Whitechapel, east London. You might feel some sympathy for the judges who have to choose between such works – on what basis do you place one well-proportioned rectangle or patch of beige brick ahead of another? But only fleetingly, as it would be a poor judge who couldn’t see the differences between them.

Of the three, the housing in Whitechapel, by Niall McLaughlin Architects, is the plainest, a bracingly simple oblong block set with oblong windows. It stands apart through such things as the depth its window reveals (enough to put flowerpots on the sills), the generosity of its balconies, the light in its interiors, the one oblique slash in its plan that helps it fit into its site. It was built for the Peabody Trust, the philanthropic housing body founded in the mid-19th century, and stands amid early examples of the Trust’s works. Often in such comparisons the old wins – more charming, more humane – but here the new has a winning generosity. You would need to be seriously obsessed with the quaintly cramped to prefer the Victorian version.

The most obviously delightful is the Maggie’s Centre, where architects Reiach and Hall have managed to make a little idyll on the edge of the car park of the bruisingly ugly Monklands hospital, Airdrie. It is like a villa a Danish modernist might have designed for him- or herself in the 1960s, low and horizontal, progressing from brick exterior to timber interior past glass walls that allow space to flow from inside to outside. It wraps around trees, and creates intimacy and openness at once.

The Whitworth is the most complex, a series of adjustments and additions to an existing building that liberate its spaces and allow it to breathe. It reveals and retunes the original while adding to it. Like the Maggies it creates connections with nature. It also does things with its ventilation systems that are unspectacular but, in the world of preserving and displaying art, highly significant.

The remaining two are Burntwood School in Wandsworth, London, by AHMM, and Heneghan Peng’s Library and Academic Building for the University of Greenwich. The school stands out for narrowly escaping the Michael Gove axe on the Labour government’s huge Building Schools for the Future programme. The programme had been criticised for marginalising good design, but AHMM says it was getting the hang of it when BSF was terminated. Burntwood is certainly a credible work, a campus of blocks whose faceted elevations and bright tilework have a retro 60s feel. The Greenwich building aims for a bit more oomph than some on the list, with robust concrete framed structure fronted with sculptural stone. Its ambition is admirable, but it comes with too many strange and clumsy moments to win the prize.

The most accomplished work of architecture on the list is the Whitworth, which means it ought to win the prize. It might not. There can be a kind of Stirlingthink, a way of thinking that relies on criteria other than sheer quality, which might decide that the Manchester museum is too similar, as a crafted incremental thing, to recent winners. So the judges might feel that it is time for a change. They might like the school, for the message it sends out about the importance of the design of such places. If they chose the Peabody, I would be impressed: it would take special courage to favour a design that apparently does so little, but does what it does do well.