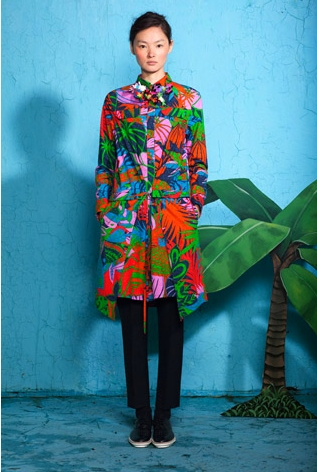 Alexander Wang, Proenza Schouler, Prabal Gurung, Derek Lam, Thakoon or French fashion designer Joseph Altuzarra, all are previous recipients of the CFDA/Vogue Fashion Fund – an initiative that aims to promote and nurture emerging design talent in the U.S. The programme helped rising fashion talents with the combination of a prize and mentoring.

Each of the ten labels will  take part in a series of in-depth interviews where a selection committee that includes Vogue editor-in-chief Anna Wintour and CFDA President Diane Von Fustenberg will assess their future plans as they relate to marketing, sales, public relations and production. They will then travel to Los Angeles where they will present several looks from their current collection in a fashion show before a winner is eventually announced at a gala dinner in New York on November 13.

“The CFDA/Vogue Fashion Fund has developed a new generation of American designers whose creative talent is known around the world,” said CFDA CEO Steven Kolb, who sits on the selection committee along with J Crew Executive Creative Director Jenna Lyons, and designer Derek Lam. “The success for these designers is built on the specialized mentoring and business grants provided by the Fashion Fund.”

As part of a partnership with new underwriter Tiffany & Co., the finalists will also be asked to design one-off looks that will be unveiled in October, and be featured in a portfolio in the November issue of Vogue.