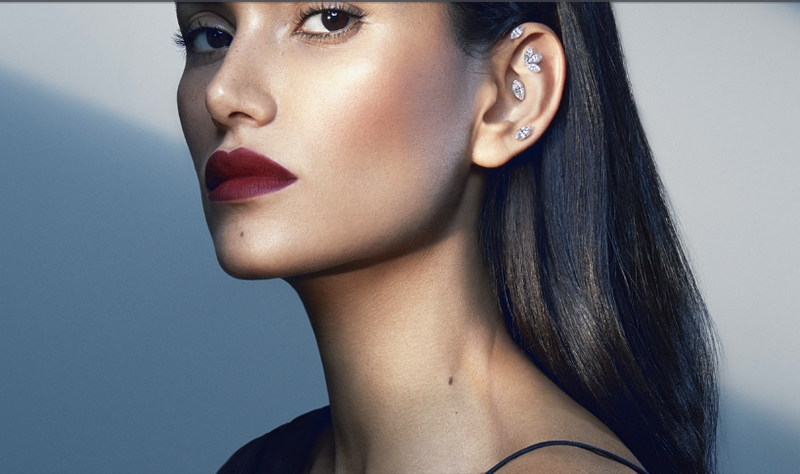 This article titled “The curated ear: why delicate, decorative piercings are the new tattoos” was written by Sirin Kale, for The Guardian on Wednesday 3rd July 2019 05.00 UTC

Conch, rook, helix, daith: these words won’t mean anything to most people, but to an army of voguish women, they are immediately recognisable as the parts of the ear that can be pierced. Look around boutique gyms, co-working spaces for the creative industries and stylish bars, and you will see women – mostly in their 20s and 30s – with intricately pierced ears.

They may have four gold hoops hanging in a single lobe, diamond bars “stacked” along their cartilage, or a skull-shaped stud glimmering from their antitragus. They’re all fans of the “curated ear” – a craze for multiple ear piercings, in unusual placements – that has arguably replaced tattoos as the body adornment du jour. Although some men are also getting in on the act, this particular piercings trend is predominately led by young women, although reliable data on the subject is hard to come by. A 2008 study found that nearly half of women in England aged 16-24 had piercings at sites other than the earlobe (this included sites elsewhere on the body). By comparison, a 2015 British study found that 30% of 25- to 39-year-olds have at least one tattoo. According to the US piercing studio Infinite Body Piercing, the five most popular ear placements in 2017 were lobes, followed by the outer helix (the upper cartilage of the ear), tragus (the piece of skin immediately in front of the ear canal), conch (the inner part of the ear itself), and forward helix (the piece of cartilage above the ear canal, where the ear meets the face).

So what is the appeal? “There was a good portion of my life where I was dunking my ears in salt water for most of an evening,” says Caitlin Quinlan, a 23-year-old who works in the film industry. She has 10 piercings across both of her ears, all in gold. “I get a few compliments on my ears, and I always really like it, because I feel like I’ve achieved something – I’ve curated my ears, and it’s nice that people notice it.”

Another ear-piercing fan says: “I think I just need the rush every six months of having a stranger stab me with something very sharp in a safe and controlled environment.”

Humans have been piercing their ears for thousands of years – bronze age frescoes depicting women wearing hoop earrings can be found on the Greek island of Santorini – but the craze for multiple piercings, often using fine metals and precious stones, is a more modern phenomenon.

One of its early proponents was Maria Tash, an American jeweller and piercer to the stars. Living in San Francisco and Los Angeles in the early 90s, she watched body piercings became fashionable. Piercers would typically use titanium jewellery with little adornment, but Tash would customise her piercings by popping a rose gold bead into a plain ring, or anodising wire into different colours. She opened her first boutique in New York in 2004; since then, she has created a global piercing empire. In addition to two London outposts, Tash has studios in Rome, Dublin and Dubai, and her celebrity fans including Rihanna and Zoë Kravitz (Rihanna has worn a diamond stud in her helix, and a ring in her third lobe; Kravitz has her tragus pierced, as well as other body parts).

A Maria Tash ear does not come cheap: prices range from £42 for a simple gold threaded stud, to £5,890 for a pear-shaped diamond. As they are designed to be “stacked” in an ear, getting the look can run to thousands of pounds.

“The curated ear is my philosophy of how we enhance a client’s beauty through layering jewellery on the ear,” says Tash. “We look very closely at the anatomy, skin tone … any scars or asymmetric features.”

The most popular trends Tash is encountering include a “stacked lobe”, with ear piercings that go above and are parallel to first and second lobe piercings, and a “high conch” piercing, in the upper, flat part of the ear. Walking the streets of Manhattan, Tash sees her influence in many passing ears.

“My eyes gravitate to things,” she says. “I think: ‘Oh, that’s a crappy placement, or that’s beautiful, or that’s my stone.’ It’s great.”

Tash isn’t the only big-name piercer in the game. In much the same way that tattoo artists have become celebrities in their own right, some of the most celebrated piercers have huge social media followings, and lengthy waiting lists. Ben Tauber, for example, has more than 56,000 Instagram followers, while J Colby Smith is known for piercing the fashion and media glitterati in Brooklyn and Los Angeles.

In the UK, Astrid & Miyu offers gold-plated body jewellery, which is ideal for achieving the curated ear look at a lower cost. It markets itself as the UK’s “most Instagrammable piercing studio” and has two shops in London, although it recently ran a month-long pop-up in the Bullring in Birmingham and has plans to open a concession in the Selfridges in the Trafford Centre in Manchester later this year.

“We wanted to make ear stacking and mixing up your ear jewellery more accessible, by making it affordable without compromising on quality,” says Sophie Williams, the company’s brand marketing associate. It was obviously a savvy business move; Astrid & Miyu is growing 200% year on year.

At least part of the popularity of multiple ear piercings may be down to the fact that they are a low-effort, reversible alternative to tattoos. Like inking, curated ears are seen as subversive, but they can also be worn every day. And they are a form of body modification that appeals to those wary of making long-term commitments. “The thing that has always been powerful about piercing is that you can take it out and you can change it as your mood dictates,” says Tash. And it is less of an undertaking, as Lucy Halligan, a 21-year-old PA from London, says. She adds that she got her 15 ear piercings “because I was too scared to get a tattoo”.

Social media has also accelerated the trend. Browse the hashtag “curated ear” on Instagram and you will see thousands of posts. Brands such as By Nouck and J&Co Jewellery use the platform as their predominant means of marketing.

“Customers use platforms such as Instagram to inspire a whole new look for their ear,” says Williams, who adds that daith (a hoop of skin in the inner ear) and helix piercings are very popular now. Another reason why the curated ear may be so popular is because it is low-effort but also chic. Once you have forked out for the jewellery – and endured the twice-daily saline soaks needed for your piercings to heal – you are set. You don’t have to change your earrings, or match them to your outfit as you might with single lobe piercings.

But the mania for piercings isn’t risk-free. After Halligan got her rook pierced in February, it got infected. “There’s no pain that can describe your cartilage swelling,” she says, grimacing. Halligan spent three days in hospital on an antibiotic drip. While there, hospital staff removed all her other piercings.

“I could hear all of the little barbells dropping into a pot. I kept thinking: ‘That’s 20 quid.’ I was so upset.” Had Halligan not sought medical help, however, the infection could have spread to her brain.

For now, it looks likely that the piercing trend isn’t going away. And, despite everything, Halligan would consider getting more piercings. She says there is a woman at her work who has her conch pierced, and Halligan finds herself looking at it enviously. “It looks so nice. Every time I say it, everyone’s like: ‘Not this again.’”