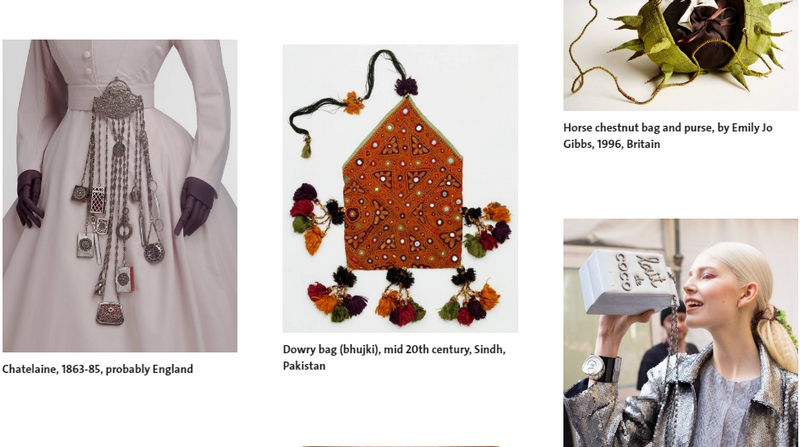 Bags: Inside Out exhibition 2020; @vam.ac.uk/exhibitions/bags

A grey Asprey handbag owned by Margaret Thatcher is to go on display at the V&A along with vanity cases, military rucksacks, Louis Vuitton luggage and a shiny “Monogram Miroir” bag popularised by Kim Kardashian and Paris Hilton.

The London gallery announced details on Wednesday of what will be the UK’s most comprehensive exhibition devoted to bags, opening in April and running for nine months.

Thatcher would not have been Thatcher without her handbags. Her biographer Charles Moore called it a “sceptre of her rule” and others have described them as part of her “Iron Lady” armoury, her secret weapon with which to deliver stern “handbaggings” to some of the men in her cabinet.

When the show was first revealed in July the curators expressed a desire to borrow a Thatcher bag because none were in its collections of her outfits. It has now secured a loan from the Museum of Bags, in Amsterdam, of a grey Asprey bag which was made in the early 1980s and regularly carried by her while in power.

The museum does have examples of her clothes, donated in 2016 by Thatcher’s twin children Carol and Mark – power dressing ensembles which include a royal-blue Aquascutum suit with shoulder pads and a matching blouse that she wore as she voted in the 1987 election.

That donation followed a row when the museum was accused of turning down an offer of her clothes. It later denied rejecting them. Its chairman, Nicholas Coleridge, insisted there was “no letter, no meeting, no judgment … no overture of any kind”.

The dust on that row has long settled and the Thatcher handbag will be a star of a show exploring what the V&A calls “the ultimate accessory”.

The show’s curator, Lucia Savi, said the exhibition would offer “an understanding and insight into the function, status, design and making of bags across the world and throughout history”.

Different visitors will be excited by different stories.

Some will enjoy seeing a second world war gas mask bag, which belonged to Queen Mary.

Others will thrill at seeing the purple Fendi Baguette bag worn by Sarah Jessica Parker’s Carrie Bradshaw character in Sex and the City, a bag memorably taken from her at gunpoint: “Give me your bag,” says the robber. “It’s a Baguette,” she corrects him, mournfully.

In total, more than 300 objects will go on display, varying in size from tiny finger purses to large travel trunks.

Celebrity endorsement will be explored with a Louis Vuitton bag, designed by Marc Jacobs and made from gold reflective vinyl popularised by Hilton and Kardashian during the “it bag” craze of the early 2000s.