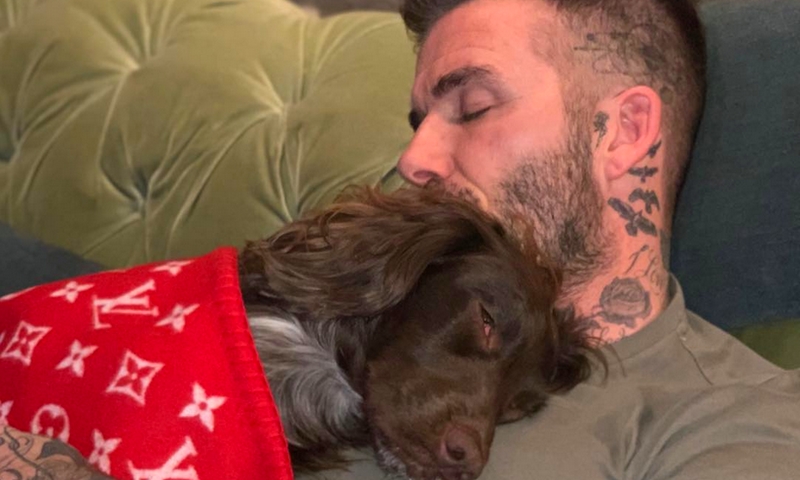 Age: A little over a year old.

For that money it doesn’t come with a dog? Oh my, no.

I can’t believe anyone in their right mind would fork out that sort of cash for a dog blanket. The Beckhams have.

OK, I can believe it. Have they really? It would seem so. Victoria Beckham’s Instagram feed recently featured a picture of their cocker spaniel, Olive, wrapped up in said blanket while being cuddled by David on the sofa.

They let their dog on the sofa? I know.

So where did this blanket come from? The article in question was designed for humans, and is part of a Louis Vuitton/Supreme collaboration from 2017.

Louis Vuitton and Supreme? Yes, the venerable design house and the wildly popular streetwear brand were hoping for a bit of cross-fertilisation from a label mashup.

How did that work out? Not that well. According to some reviews, the tie-up damaged the credibility of both names. The New York Times called it “the fashion version of a murder-suicide”.

Too bad. Still, what does a dog know about fashion? Nothing. They’re colour-blind. They still wear fur.

And I’m not averse to a bit of pet pampering. I dry my dogs with a branded beach towel. Which brand?

Heineken. I keep it in the car, though, because it smells. Can you put a £5k blanket in the washing machine? To be fair, I imagine the Beckhams’ dog is extremely clean.

Clean, and unbelievably spoilt. No, just well looked after. As well as being a much-loved pet, Olive is a high-quality pedigree animal.

I bet she didn’t cost as much as the blanket. She is also a celebrity in her own right, with an Instagram account and 70,000 followers.

You mean she’s a canine influencer? Quite possibly.

In that case, I want one of those blankets. Too late.

Do say: “This Cartier watch doesn’t go with my tiara. Maybe the cat could wear it as a collar.”