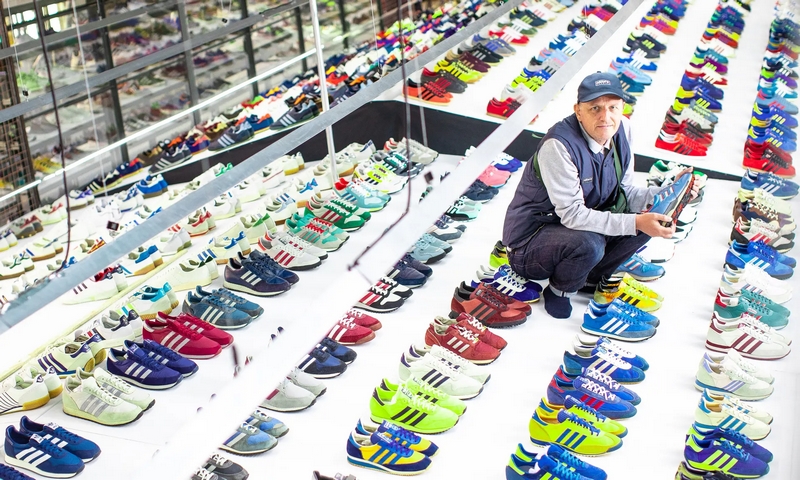 It was more than 48 hours before the Adidas exhibition was due to open at the Exchange, the old cotton exchange, in Blackburn and already a gaggle of sneaker superfans had gathered outside.

Inside, Gary Aspden, the locally born designer of the brand’s cult Spezial range, was busy arranging 1,200 pairs of trainers plucked from his own 2,000-strong archive and borrowed from collectors around the world, including Stan Smiths worn and signed by Kate Moss, one-offs made for the Beastie Boys, as well as pristine originals from the 1950s.

To trainer spotters, who might spend £700 on a rare pair, Aspden is a god. Collectors had travelled from as far away as Australia and Los Angeles to try to get their hands on Aspden’s latest limited edition, the Blackburn Nightsafe, a rubber-soled love letter to his home town.

Aspden was excited that Adidas had agreed to launch the £100 shoe in Blackburn instead of London or New York on Friday. All proceeds from the 200 pairs made will go to a local homelessness charity, Nightsafe.

“I’m absolutely over the moon about it. I can’t tell you how happy it makes me,” he said, his Lancastrian accent intact despite years spent working in London. “This is one of the top 10 poorest towns in Europe and I feel strongly that places like Blackburn, which have been hit badly by austerity, can be regenerated with the help of culture.”

Getting the shoe into production involved protracted negotiations with Adidas’s lawyers, who initially vetoed the idea after bruising encounters with litigious cities the world over. When Aspden told Blackburn council about the concerns, the leader put his head in his hands. “He said: ‘You’re joking? This would be so good for the town.’ And they made it clear they would bend over backwards to make it happen,” Aspden said.

Once he got the green light from his beloved Blackburn Rovers, who Adidas’s legal eagles had feared could also make a trademark claim, Aspden set about designing the shoe. He decided against emulating Rovers’ blue and white kit and zoomed in instead on the red and green of the Lancastrian rose.

Aspden’s show is likely to be one of the most popular exhibits at the inaugural British Textile Biennial, which runs throughout autumn in locations across east Lancashire. Set in and around the infrastructure of the cotton industry, the festival celebrates the past and present of UK-made textiles through art, design and performance.

Jamie Holman’s commission, Transform and Escape the Dogs, tells the story of how Blackburn’s mills were taken over for raves in the 1980s, culminating in the Live the Dream party in the village of Tockholes. Holman spent 18 months winning the trust of old Blackburn ravers, who were protective of their legacy. The resulting show is a co-production with these acid house survivors, who allowed him to use video footage of the parties as well as photos, which Holman had made into a stained glass window and silk trade union-style banners.

Fourteen miles away in Pendle, the biennial takes over Brierfield Mill before the mill is turned into luxury apartments. Banner Culture is a mass staging of banners waved at protests in the UK over the last 100 years. There are beautifully embroidered cloths hung on the fence at Greenham Common, commemorations of the Grenfell Tower tragedy and the Hillsborough victims, and others celebrating everything from women’s suffrage to Greggs the bakers (“This banner demonstrates a familiarity and comfort for me,” says the artist, Tara Colette.)

Another reads “Jane Hellings is a Slag”, made by Hellings herself, recalling words scrawled about her on a toilet door at her school in 1975. “I was 14 and getting through boyfriends, because I wouldn’t have sex with him,” she says in the programme notes. “Publicly owning that label is an act of resistance against contemporary slut-shaming.”